alchemist who survived now dreams of a quiet city life

The second volume of this series has many of the same strengths and weaknesses that the first has. The writing is good and makes you want to see what’s coming next. There is slightly less detail about the creation of potions, which pleased me. Those who are into deep worldbuilding will love it. But it seems tonally off in a way that means I can never quite love it. The author still wants to use slavery and critique it, but also shows us that all the slaves we meet are “bad guys being punished for robbery and murder” so that we’re still OK with it in this series. More to the point, there’s a disconnect between the world this book exists in and Mariela herself, and I don’t just mean that she’s displaced by 200 years from her old world, though that might explain it. It’s a slice of grim-n-gritty life, with Mariela being a bright ball of sunshine bringing joy into everyone’s life. The two don’t always mesh. 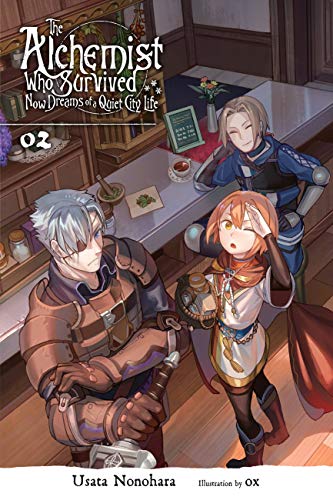 There’s a lot going on in this 2nd volume, even longer than the first – and the first was quite long. Mariela and Sieg are trying to run her shop, meet new people, and avoid having her outed as an alchemist, as she’d rather not be shut up in a building and worked to death. We see as the book moves along that her fears are not entirely unfounded. The Kingdom is still trying to beat the Labyrinth once and for all, helped out by Mariela’s Holy Water. And a noble family has a dark secret, one not entirely known to the nice girl who befriends Mariela and shows her the wonders of modern appliances, but her older brother certainly knows and is obsessed with it. What is concealed in a secret passageway in their mansion? And what kinds of things are being done to slaves to ensure the safety of the royal family?

If it sounds like this turned into a different story, you’re thinking along the lines I was. The last part of the book is quite dark and disturbing, with sacrifices, blood magic, and graphic descriptions of people’s heads cut open and brains showing. It contrasts with the childlike Mariela, who is shown to be even more childlike than she had been before in these scenes, as if the author wanted to emphasize the contrast but took it too far. Indeed, for most of the book the author can’t quite decide whether Mariela is meant to act like a 16-year-old or a 6-year-old, and it pinwheels between the two. This is especially discomfiting given that both Sieg and Lynx are shown to be falling for her. Innocent is fine, immature is less so.

Despite this, the book overall is very readable, and while it has many parts that annoy me I don’t actually feel the need to drop it yet. The flashback scenes showing Mariela’s first learning of alchemy and the relationship with her master are excellent. I just wish the author would stay in the fantasy-slice-of-life lane and stop making detours to the wrong side of the tracks.

It’s possible that I simply have overinflated expectations for slow life titles with a female protagonist, but I must admit that I found this book a big old grab bag of good stuff and bad stuff, with in the end the bad outweighing the good a bit. I am reminded once again that there is a roadmap these fantasy light novels follow, and much as we as readers would like them to forge a new path they are absolutely going to stay on the well-traveled road. And that means we get slavery here, along with the heroine not really caring about it (she’s not reincarnated from Japan, though, so gets a bit more of a pass). It means we get more “her breasts are huge and I am sad that mine are not” descriptions, some of which verge on the ridiculous. And it means endless, truly endless descriptions of alchemical recipes, as if this were a foodie title. Sometimes worldbuilding can be boring. 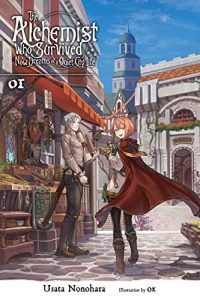 Mariela is a young, relatively poor alchemist in a city with quite a few of them, living in a cabin in the woods while waiting for her Master to return. Then there’s a monster stampede killing everyone in its path. To survive, she puts herself in suspended animation… but forgets she’s in a hole in the ground, so her candle goes out and the spell lasts for two hundred years. Now awake again, she finds that alchemy has mostly died off, and that potions are highly prized. She decides to make a new life for herself in the city, hiding her real profession but opening an apothecary so she can be as close to it as possible. With the help of Siegmund, a slave she purchased on impulse who turns out to clean up very nicely, and a bunch of friendly soldiers and innkeepers, she resolves to live her slow life in a world that, to her, is the far future.

Great premise, and it has to be said Mariela is the best thing about the title. An odd combination of savvy and stunningly naive, you can see why she tends to worry people around her. She describes herself as just your average alchemist, but it’s pretty clear her Master was a genius, and Mariela was well on her way to surpassing that. Unfortunately, her treatment of Sieg, which is basically “I bought him as a slave and order him around for everyday household tasks but like to think we are the bestest of friends!” is cringeworthy. More to the point, this volume desperately needed an editor. Not on the Western side, Yen’s version is fine, but on the Japanese side. It’s a very long book, and future volumes in the series are just as long or longer. A good half of the book is Mariela describing in detail her alchemical processes and why you need this herb or that monster ingredient. I’ve mentioned that I dislike the “stat descriptions” in game based isekai. This is a normal fantasy, but may be just as bad. A lot of these Syosetsu webnovels need to have their wordcount culled before publication.

Again, problematic as she is, I liked Mariela, and will likely try a second volume. But honestly, I recommend this for those who REALLY love immersing themselves in worldbuilding and want to know exactly what steps to take to be an alchemist.