There’s a new publisher in the North American market, and Square Enix Manga has chosen this series to be their debut. It’s a strong choice. The series hits on several popular manga genres, is heartwarming and touching without getting cloying, and is also one of those titles where pet owners will be nodding their heads in understanding and sympathy. Since it is a new publisher, I’ll briefly get into the technical details before starting the review. The book looks nice, with thicker cover stock than others, and good solid paper. There are color pages at the front and the back. The translation is fine, though be warned that one of the narrators is a cat, which means that there are lots of “inserting meow into every word” choices. This mirrors the Japanese, of course, but I know some people might find it aggravating. That said, the main reason anyone will be picking up and continuing to read this is the titular man and cat. 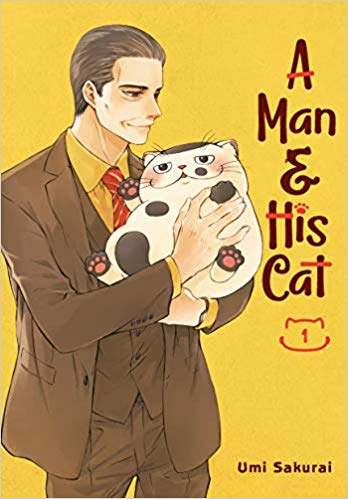 A cat, nearly one year old, sits unloved in a pet shop. He’s an exotic shorthair, and looks odd, so no one cares… plus he’s now too old. Into this shop comes Kaito, an old man who takes an immediate liking to this cat, who he buys and names Fukumaru. The man and the cat are both very lonely people through circumstance, and so bond almost immediately. The rest of the volume consists of glimpses into Kaito’s current and past life and amusing “this is what it is like to own a cat” stories. Fukumaru is very loving and hands-on for a cat, so the series ends up being full of heartwarming moments. Kaito’s friends and co-workers are also very nice, sweet people. There’s no real conflict beyond things like “will he be OK when I leave the house for the day”, but that’s fine, as this series gets by on pure heartwarming.

One thing I love about this title is its subtlety regarding Kaito’s life, which is still only somewhat sketched in. He’s an older gentleman, and we see a few flashbacks to him and his wife, where they discuss getting a cat. It’s never explicitly stated, but it’s very clear his wife has now passed away, which weighs heavily on him. A flashback suggests they knew each other from childhood, which makes it even more painful. Kaito seems to be a music teacher, and there are some lovely scenes of him playing the piano. But the kids he teaches note that he only played sad songs till recently (i.e. pre-cat), and he implies he has a love/hate relationship with his piano (and, inferred, his career in general.) Basically, while I definitely think people are buying this manga for the cat, the man gets just as much attention, and is fascinating.

This is definitely a title that “hits you in the feels”, and I think it’s a great choice for Square Enix to mark its debut. I highly look forward to the second volume.