SEAN: Airship has a bunch of print titles. We see Accomplishments of the Duke’s Daughter 7, Reincarnated as a Sword 11, She Professed Herself Pupil of the Wise Man 5, and A Tale of the Secret Saint 4.

While we get early digital for Classroom of the Elite: Year 2 4 and Trapped in a Dating Sim: The World of Otome Games is Tough for Mobs 8.

Bookwalker has She’s Adopted a High School Boy! 13 (the final volume – if you’re wondering about the previous 12 volumes, this seems to have been exclusive to Bookwalker, so I kept missing it).

ASH: I don’t know that anyone can keep up with all of the digital manga that are legitimately available these days!

SEAN: Cross Infinite World has a 2nd volume of The Dragon’s Soulmate is a Mushroom Princess!.

Ghost Ship has Survival in Another World with My Mistress! 3 and Yuuna and the Haunted Hot Springs 22. 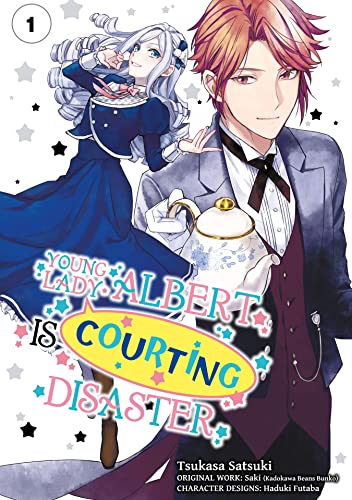 The debut from J-Novel Club is a manga this time around. Young Lady Albert Is Courting Disaster (Albert-ke no Reijou wa Botsuraku wo Goshomou desu) is a reincarnated villainess story based on a light novel that isn’t licensed. This one flips the script a bit – on hearing that she’s the villainess in an otome game, Mary Albert goes ALL IN in trying to be as evil as can be! Why… why doesn’t the heroine think she’s evil? It runs in B’s-LOG COMIC.

ASH: That could be a fun variation.

SEAN: We also see Grimgar of Fantasy and Ash 19, Lazy Dungeon Master 17, My Quiet Blacksmith Life in Another World 5, and the 3rd Tearmoon Empire manga volume.

Kodansha’s print titles: Blood on the Tracks 12, EDENS ZERO 20, I Was Reincarnated as the 7th Prince so I Can Take My Time Perfecting My Magical Ability 3, Shangri-La Frontier 3, and What Did You Eat Yesterday? 19.

MICHELLE: I need to get caught up on What Did You Eat Yesterday?!

ASH: Still so very happy we’re getting this series.

SEAN: Digitally we see Beauty and the Beast of Paradise Lost 5 (the final volume), Burn the House Down 7, Even Given the Worthless “Appraiser” Class, I’m Actually the Strongest 6, The Food Diary of Miss Maid 2, The Full-Time Wife Escapist 10 (!!!), A Galaxy Next Door 4, Gamaran: Shura 3, and The Rokudo Rounds 4.

MICHELLE: !!!! This is twice in recent memory when a series that had been advertised as over—and yes, I checked the “final volume” blurbs for both Fruits Basket Another and Full-Time Wife Escapist—has returned from the dead. 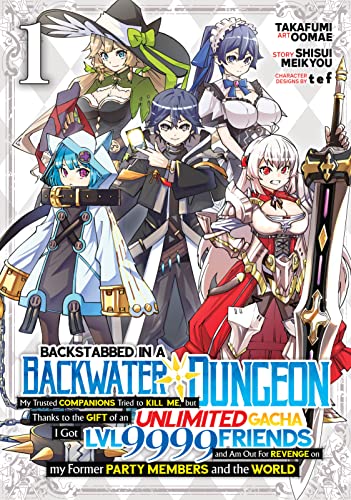 SEAN: Two debuts for Seven Seas. Backstabbed in a Backwater Dungeon: My Party Tried to Kill Me, But Thanks to an Infinite Gacha I Got LVL 9999 Friends and Am Out For Revenge (Shinjiteita Nakama-tachi ni Dungeon Okuchi de Korosarekaketa ga Gift “Mugen Gacha” de Level 9999 no Nakama-tachi wo Te ni Irete Moto Party Member to Sekai ni Fukushuu & “Zamaa!” Shimasu!) is an adaptation of the light novel J-Novel Club is putting out, and the manga runs in Magazine Pocket. That’s all I have to say about it. Moving on.

ASH: The title already says most of it.

SEAN: Entangled with You: The Garden of 100 Grasses (Hyakusou no Uraniwa) is a one-shot BL title from Printemps Shuppan that’s a fantasy about a boy who makes a promise with a horned man to save his sister. Will that promise lead to death… or friendship?

MICHELLE: I like the fairy tale look and feel of this cover!

ASH: Same! I’m curious about this one, for sure.

SEAN: Also from Seven Seas: Berserk of Gluttony 7, The Country Without Humans 3, Dance in the Vampire Bund: Age of Scarlet Order 7, GIGANT 10 (the final volume), Magical Angel Creamy Mami and the Spoiled Princess 4, Reborn as a Barrier Master 3, She Professed Herself Pupil of the Wise Man 7, Sorry For My Familiar 10, Toradora! 10, and The Two of Them Are Pretty Much Like This 2. By the way, the first manga volume of Toradora! came out in North America OVER 10 YEARS AGO. This is a slow-moving series in Japan.

Square Enix has a 3rd volume of the Otherside Picnic manga.

From Viz Media we get Fist of the North Star 7, Jujutsu Kaisen: Summer of Ashes, Autumn of Dust (a light novel), Maison Ikkoku Collector’s Edition 10 (the final volume), and Thus Spoke Rohan Kishibe 2.

SEAN: And that’s it! Should auld manga be forgot and never brought to mind?