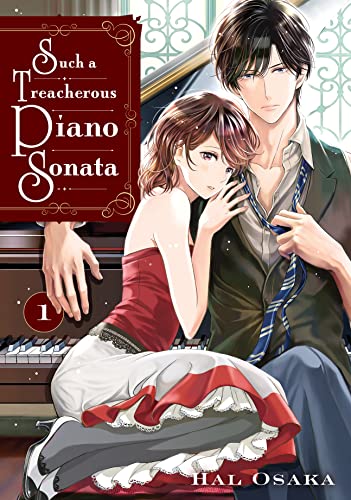 KATE: I freely admit that any manga title that includes the words “treacherous piano sonata” has potential, but Golden Gold‘s blend of horror and folklore sounds like a safer bet for me; I’m 100% less likely to nit-pick about the author’s musical knowledge (or lack thereof).

SEAN: One of the benefits of Kodansha Manga’s ludicrous digital manga release schedule has been a lot more josei. After so many high school romances with brooding boys, I want to read series about two adults, with a brooding MAN. And so my pick is Such a Treacherous Piano Sonata. Great cover, too.

MICHELLE: I share Kate’s trepidation about Such a Treacherous Piano Sonata, I’m afraid, so I’ll instead award my pick to the sixth and final volume of Wotakoi: Love Is Hard for Otaku. I really enjoyed the first two volumes then life happened and I got behind, so I look forward to starting afresh and devouring the whole story at once.

ASH: I seem to be on the same page as everyone else this week with a distinct interest in Such a Treacherous Piano Sonata, although I may have a higher tolerance of liberal interpretations of music in manga. That being said, I join Michelle this week in choosing Wotakoi as my pick, since it will be my last opportunity and I’ve really been enjoying the series.

ANNA: I’m going to throw caution to the winds and just go with Such a Treacherous Piano Sonata!

MELINDA: I’m pretty interested in X-Gender, but even though josei romance is very hit-or-miss for me, I am irresistibly drawn to Such a Treacherous Piano Sonata. I’m sure I’ll have plenty of musical nitpicks, but somehow the older I get, the more tolerant I become of such blasphemy, so I’ll give it a shot.