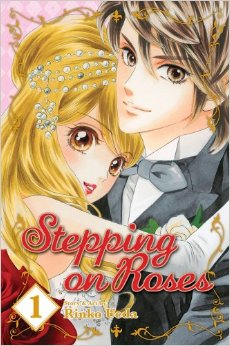 Ah, getting back to old habits can be good, no? Flexing your muscles after so long diminished is how you figure out what made you like your vocation. What am I prattling on about? I’m back writing about Shoujo again! instead of going back to Sailor Moon straight away, I’ve decided to tackle a clean title. Recently, VIZ Media opened their digital catalogue to people outside the US and I decided to buy with my money a Shojo Beat title that I’d never heard anyone talk about but that I had wanted to review blind. Was it any good? Ahhh, so close and yet so far.

Stepping on Roses by Rinko Ueda is a turn of the 19th century Japanese tail of Sumi Kitamura, a down on her luck girl taking care of four children that her dreamboat brother Eisuke keeps bringing home with him. As she’s taking care of these children, he’s supposed to be providing for them. He however, is about as helpful as a cardboard oar when it comes to money. As a result of Eisuke’s overdrawn credit, Sumi tries in vain to pay for one of the children’s medicine. Before anything bad can happen (this is a shoujo title after all), she is saved by a young man giving her a handkerchief with some money inside before disappearing into the crowd. When Sumi gets more pressure from Eisuke’s creditors, she tries to sell herself in the red light district and nearly falls into a nasty situation, only to be rescued (this is a shoujo title, after all) by Soichiro Ashida, a young, handsome and soon to be wealthy young man. Soon enough she has her money but there’s a catch: she must marry Soichiro who needs her to inherit the family silver, as it were. So, there she is in a life of luxury and hating it and wanting to get back to her kids while Soichiro goes to work changing her into a high lady of society.

OK, I’ve no problem with flights of fancy and this is an amazing flight, indeed. Sumi spends her first few days in Soichiro’s house desperately trying to find out if the children and Eisuke are ok but it’s not easy. Soichiro is cut straight out of the Charles Dickens playbook of villainy. He marries Sumi for money, treats her like harshly and knows that his friend Ijuin Nozomu is the boy she was saved by. Every time it looks like Sumi isn’t coming up to muster, he threatens to sink her to the bottom of the sea. Who even uses this kind of language in fiction? It’s too bad he doesn’t have a moustache to twirl. He barely eats anything (well, that amazing figure doesn’t tone itself I’d imagine), sleeps in silk pajamas, plots to defraud his grandfather and can now run his family’s fortune his way. So why do I like him? Hmm, I need to prepare your beforehand that I’ve only read this volume and no further in the series so Soichiro could turn out to be an edjit for all I know. OK, so Soichiro: I like him because despite all his villainy, he doesn’t hate Sumi and doesn’t hurt her in any way save dragging her across town to the church (ok, that came out all wrong). He seems to be more worried once he has control of the family fortune than he does beforehand. Every time he looks like he’s going to hurt her, it turns out to be something innocent. She thinks he’s going to have his way with her, turns out he noticed her nightdress is on backwards (through the personal space invasion is treading on thin ice). He does have this awful habit of flinging Sumi into lots of furniture: beds, sofas, chairs. That and treating her like dirt for being poor. It’s not like she could help it, dude.

Another thing that doesn’t really add up is Eisuke is a complete cad but Sumi is the nice one. So if she’s been missing for a day or two, why is Eisuke not worried? Money comes in from a mysterious person and he doesn’t bat an eyelid. Little known fact, people with less than honorable traits usually notice when something is up with someone who does have positive traits. Not here. Eisuke just rolls with it. Only when the kids pester him into it, does he decide to look for her. Who’s betting he decides to blackmail Soichiro only for a rival for his affections to notice and use it as a reason to get rid of Sumi out of Soichiro’s life? If I turn out to be right, VIZ can post my royalty checks to the editor here of Mangabookshelf. I could be wrong and this could turn out to be completely different in its execution but somehow I doubt it. I also think that Soichiro and Sumi will fall more in love with each other as the volumes progress. Why? Well, if they break up, he loses everything. If they do, Sumi is free to marry Nozomu except that I think Nozomu is in love with Soichiro. So that’s not going to happen. Do you really think Ueda is going to go full blown David Copperfield on Sumi with Soichiro? If she did, I’d eat up every volume because I root for the underdog always. But Soichciro isn’t a bad person, just makes rather mean choices. So, there is a chance of redemption for him. So that leaves Sumi and Soichiro together for the duration as they learn about themselves and about love. Now, I love that when it happens in a Nora Ephron film but here, stretched out over 9 plus volumes when I checked, I don’t know if they can hold my attention. Time will tell. So what’s the upside to this first volume?

People get slapped senseless in this book, it’s a shame there isn’t a hit counter on each page. Ueda seems to delight in having people beaten. Landlords, kerb crawlers, the main lead, the main love interest, the manservants. Just like an episode of Dallas or Falcon Crest except done in black and white. It’s awesome. There’s always tears or shocked expressions whenever it happens. Also, I love Sumi as our plucky hero. She just goes from nothing but happy to everything and depressed in the blink of an eye and this just makes her grit her teeth harder. Despite her feeling that Soichiro is a very stern and harsh person, she looks conflicted when he acts nice to her or at least it looks like he’s acting. I got the sense in the scene where he continuously kisses her to make sure she can pass inspection from their keen eyed guest, she doesn’t know what to think since their deal didn’t involve showing each other affection. Also, she looks so scared when he kisses her but still comes through to talk with Nozomu when she gets looked in her room by Soichiro. Soichiro’s manservant Gengoro provides a lot of fun in his calm demeanour being spoiled by his master giving him crazy orders like teaching Sumi how to write and read, eat in a Western fashion and walk in Western clothing in less than a month!

Artwork wise, it’s six of one, half a dozen of the other. Ueda gives her cast a sweeping look with Soichiro being that classic archetype who looks good in anything: wedding suits, evening wear and so on. Sumi doesn’t really look poor, she just looks like she’s wearing someone else’s costume. When she’s dressed in high fashion, she looks stunning and Ueda loves working on her. But she frequently neglects her background characters. The only way I could tell the kids apart is when they were separated, when put together, they just are a mess. But that might be deliberate on Ueda’s part so I’ll hold off. The people in the background (prostitutes, wedding guests and so on) just look like a bunch of character models on a page. Needs more work as my old teachers would say.

Stepping on Roses problem isn’t that it’s boring or that the story isn’t good. It’s just that it feels like more of the same for me and works too hard at the scenes instead of the characters. I want to like the story and the cast but it feels like I’m watching a soap opera instead of a story. In some cases, the bubble of artificiality can work to an author’s advantage. Here, the bubble is getting between you and the story. Soichiro really isn’t a nice person but he’s portrayed as being redeemable. Sumi is a good, likable girl who is willing to sell herself but gets nervous around another stranger who’s got a contract with her. It’s a bunch of people who can’t settle on being good or bad or conflicted. Arrggh! It’s so frustrating. I’ll report back when I get volume two.