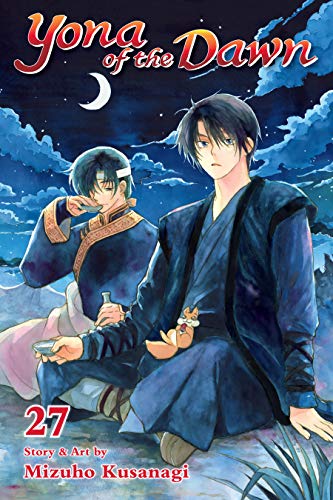 MICHELLE: There are a few things coming out this week that appeal to me a great deal, not least of which is the latest Yona of the Dawn, but this week I’ll highlight a pair of digital-only Kodansha josei series that I’ve been enjoying a lot: Chihayafuru (now volume 23) and Ex-Enthusiasts: MotoKar Mania (now volume 5). I will never not be grateful that Kodansha is reliably churning out josei material on a monthly basis. Ten years ago we had a dearth of great josei and now we have a respectable amount of options!

SEAN: I’m also interested in Yona, as well as Reign of the Seven Spellblades, but my pick this week is Eniale & Dewiela, because honestly Kamome Shirahama could do a manga of the phone book and it would be gorgeous and awesome. I’m also interested in seeing how the creator of Witch Hat Atelier creator does comedy.

ANNA: There’s a lot of intriguing manga coming out this week, but I’m going to pick Yona of the Dawn, which is consistently great.

ASH: Like Sean, my top pick this week is Eniale & Dewiela, but I’m also curious about How Many Light-Years to Babylon since I enjoyed the creator’s odd sort of humor in The Voynich Hotel and have had good luck reading other Seiun Award winners in the past.