SEAN: So Yen is splitting its shipment, pushing a bunch of its titles into the first week of February. Lucky for all of you, or next week would be even bigger than it already is.

Ghost Ship has a 2nd omnibus of To-Love-Ru, and a 2nd volume of its sequel To-Love-Ru Darkness. 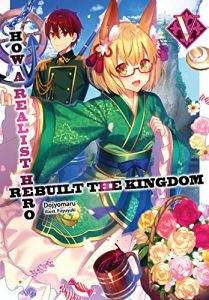 Three new volumes from J-Novel Club, as we see a 7th Grimgar of Fantasy and Ash, a 5th How a Realist Hero Rebuilt the Kingdom, and a 2nd Outbreak Company.

Kodansha Digital seemingly has nothing out next week if you look at Amazon and B&N. Kodansha’s own site, however, says they’ve definitely got some stuff. We have Black Panther and Sweet 16 6, Giant Killing 10, Living Room Matsunaga-san 2, and Until Your Bones Rot 4.

SEAN: We also have the 9th and final volume of The Full-Time Wife Escapist, which I’m still running behind on but remains my favorite digital license from Kodansha.

MICHELLE: I’m very much looking forward to this.

ANNA: I like this series even though I’m so far behind, maybe I will binge a bit on the weekend.

SEAN: There’s also print, with a 3rd Kiss Me at the Stroke of Midnight, and a 9th volume of endurance test Welcome to the Ballroom.

ANNA: This is not inspiring me to get caught up on Ballroom!

ASH: I’m already behind on Kiss Me at the Stroke of Midnight, but I did enjoy the first volume more than I thought I would. 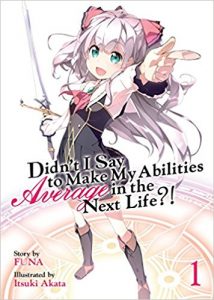 SEAN: Seven Seas debuts a light novel digitally next week, though the print edition is not out till June. It definitely has a light novel title: Didn’t I Say To Make My Abilities Average in the Next Life?!. It does have a female lead, though. I’m all for light novels with female leads.

The manga debut is Nameless Asterism (Nanashi no Asterism), a Gangan Online series that seems to be about a love polygon, and may also have elements of BL and yuri.

ASH: I’m rather curious about Nameless Asterism; looking forward to giving the first volume a try!

SEAN: Vertical has a 6th Immortal Hounds, which is now caught up with Japan, I think.

And so we come to Yen. There’s digital-only titles, as we get Crimson Prince 14, Kuzumi-kun, Can’t You Read the Room? 4, Now Playing 4, and Sekirei 14. There’s also a digital release of the light novels Kieli’s vols. 2 and 3.

Yen On has light novels, though thankfully this is a small month after the deluge in December. We get Death March to the Parallel World Rhapsody 4, My Youth Romantic Comedy Is Wrong As I Expected 4, Overlord 6, and Strike the Blood 8. 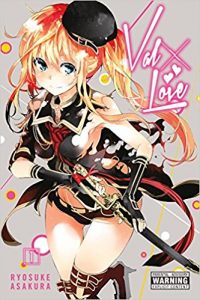 As for Yen Press, there’s several titles out next week (unless you get manga from Diamond Comics, in which case their monopoly is pointing and laughing at you). Debuting is Baccano!, a manga adaptation of the first light novel. Actually, the first volume is mostly an original prequel to the novels written by Narita, featuring Firo and the Gandors a few years earlier. It’s already come out digitally, but now you can enjoy it in print.

The other debut is Val x Love (Ikusa x Koi), an ecchi fantasy series from Shonen Gangan that sounds like it will appeal to fans of High School DxD.

And that’s all for Yen for next week, but stay tuned to the week after. Anything appealing to you here?