SEAN: I can’t. I just can’t. How on earth is this much stuff coming out?

MICHELLE: And still none of it is 7SEEDS or Silver Diamond!

ASH: I somehow managed to forget that the novel series was still ongoing. 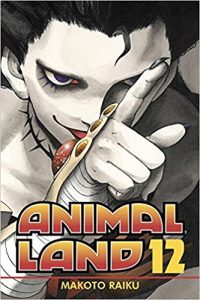 Somehow there is a new Animal Land out, Vol. 12. Only 9 months after 11! Is the series back on track?

ASH: Maybe?! The ending seems so close and yet so far away.

SEAN: Kodansha gives us a 4th volume of Chihayafura digitally. Will our ragtag bunch of karuta misfits get it together?

SEAN: And there’s a 4th manga volume of Clockwork Planet, whose novel I enjoyed more than I did the adaptation.

As does Fire Force, which is print, and still not as good as Soul Eater, IMO.

Inuyashiki 8 comes out in print as well. It’s ended in Japan recently.

And Land of the Lustrous hopes to make slightly more sense with Vol. 2, but it will look gorgeous no matter what.

ANNA: Maybe I’ll check it out from the library just for the pretty…. 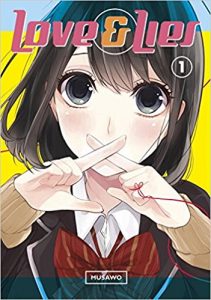 SEAN: The first debut next week is Love & Lies, which North American readers may find slightly familiar if they read it on the Mangabox app. It’s also got an anime coming out. The premise involves a Japan where everyone automatically gets an arranged marriage at 16.

Kodansha has a 2nd volume of Real Girl, meaning I should read the first, but TOO MUCH MANGA.

MICHELLE: I missed the first one, as well.

SEAN: The second debut next week is another of THOSE isekai adaptations. That Time I Got Reincarnated As a Slime is based on a novel Yen will be starting this December, and Kodansha’s adaptation runs in Shonen Sirius. The premise is… what the plot says.

ANNA: We live in interesting times.

SEAN: Lastly (for Kodansha), we get a 2nd digital volume of Tzuredure Children.

On to Seven Seas, who blissfully only have two releases next week. A Centaur’s Life has its own anime adaptation going on, which seems to be adapting a lot more than I expected, including scenes I was sure it would cut. This is the 12th volume.

Vertical has reached a dozen volumes of What Did You Eat Yesterday?. Will there be egg dishes? (Do eggs come in dozens in Japan?)

MICHELLE: !!!!!! I love when there are surprise things that weren’t on my radar.

ASH: I’m always read for more What Did You Eat Yesterday!

SEAN: The rest of the list is Yen. They have a bunch of light novels. The 4th Asterisk War may not be the best of them, but my guess is that it’s the shortest. 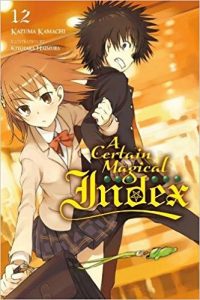 A Certain Magical Index’s 12th volume is a ‘downtime’ book, with much of it taken up by wacky shenanigans. I suspect the cliffhanger will be less wacky, though.

The Devil Is a Part-Timer! has an 8th volume, and may finally be returning to Enta Isla for a bit.

The Irregular at Magic High School has a 5th volume that I would also classify as ‘downtime’, but we do get a Beach Episode out of it.

KonoSuba’s 3rd volume will, one hopes, be completely ridiculous.

Rokka: Braves of the Six Flowers has a 2nd volume, where we see how long they can extend the “one of us is a traitor” plotline.

Yen manga also has one or two or twenty titles. Anne Happy has a 6th volume, and may be caught up with Japan by now.

ASH: The first volume was fun and I’ve been meaning to read more, I just haven’t gotten around to it yet. 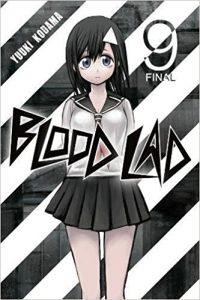 SEAN: We have reached the final Blood Lad! You can tell it’s the final one as it’s not an omnibus, ending with a single-sized 9th volume. I will miss this underrated series.

BTOOOM! has an 18th volume, and I haven’t missed it at all, but it’s not going anywhere yet.

Delicious in Dungeon’s first volume was enjoyable enough, though I worry it will leave me with very little to review. Definitely getting its 2nd volume, though.

MICHELLE: I kept meaning to read the first, but now I’ll just have to review the first two together.

ASH: I loved the first volume and am looking forward to the next a great deal.

SEAN: There is also a 3rd Demonizer Zilch, which I keep forgetting Yen puts out.

More series whose premise I just couldn’t get past, we have a 7th First Love Monster.

Girls’ Last Tour will have an adorable post-apocalypse in Volume 2.

ASH: I didn’t find the characters overly compelling, but I did really like world and environment of the series. 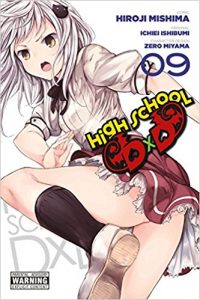 SEAN: High School DxD is not dead, it merely seems like it after this recent hiatus. It returns with Vol. 9.

Kiss and White Lily for My Dearest Girl has a 3rd volume of what will no doubt be adorable yuri stories.

Log Horizon: The West Wind Brigade does not have yuri, but it does have Soujiro, so there’s a tradeoff. This is Volume 6.

Murcielago’s 3rd volume will no doubt have yuri, but if you see “If you liked Murcielago, you may also like Kiss And White Lily for My Dearest Girl”, something is screwy with Amazon’s algorithms.

ASH: HA! Someone may be in for a surprise.

SEAN: Re: Zero’s 2nd arc has its 2nd manga volume, and no doubt features Subaru dying.

Rokka also has a manga adaptation, and it’s up to Vol. 3.

Vol. 3s are popular these days! We also have a 3rd Spirits & Cat Ears.

And double digits for Trinity Ten… um, I mean Seven.

Ubel Blatt also hits double digits with its 9th omnibus. If that makes no sense, you don’t know Ubel Blatt.

MICHELLE: Yay! This is a good week!

ASH: Yay, indeed! Yowamushi Pedal isn’t released nearly as often as I wish it was.

SEAN: You must be getting SOMETHING from this morass. What is it?