SEAN: November continues to give us lots of manga, with something for everyone next week.

Dark Horse has Psycho Pass: Inspector Shinya Kogami, a prequel to the popular anime series detailing the main character’s days as an Inspector. 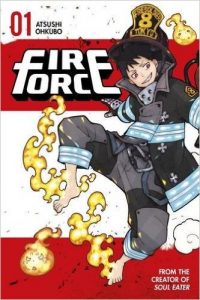 Kodansha gives us Fire Force, from the creator of Soul Eater. It’s about demons causing people to catch fire, and a boy with special powers who joins the fire brigade to help. I look forward to the art if nothing else.

SEAN: Did you enjoy Parasyte? Did you want more from this world, possibly from different creators? Then get ready for Neo Parasyte f, an anthology that collects all sorts of Parasyte-related stories from creators like Kaori Yuki (Godchild), Ema Toyama (Missions of Love), and Yuri Narushima (Planet Ladder).

ASH: I am incredibly excited for this anthology! Asumiko Nakamura (Utsubora, Doukyusei) is a contributor, too.

SEAN: There’s a 3rd omnibus of Princess Jellyfish, as they continue to try to save the apartment complex.

MICHELLE: This is already in my Amazon cart!

ASH: Still incredibly happy this series is getting a print release!

ANNA: I need to put it in my Amazon cart!

SEAN: And a 9th UQ Holder, which finally gave up and subtitled itself Negima 2 in Japan.

I find it hard to believe A Centaur’s Life has reached double digits, but there we are. Seven Seas releases Vol. 10 next week.

And there’s an 11th Devils And Realist, which is less hard to believe.

There’s a new series debuting called Re: Monster, with a fantasy world and reincarnation and a male hero who amasses a harem of zzzzzzzzzzzzzzzzzzz…

And a third volume of Shomin Sample, which has only its snarky hero to save it from oblivion. 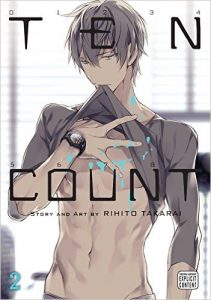 SuBLime has a 2nd volume of Ten Count, which is still not about boxing, but it does have guys pulling off their shirts. Or possibly eating their shirts.

ASH: Nope, not about boxing. But I did find the first volume compelling.

ANNA: I think I have the first volume stashed somewhere, I need to read it!

SEAN: Vertical gives us the 3rd Seraph of the End novel, a prequel to the Viz manga.

Ranma 1/2 is starting to wrap up, but isn’t quite there yet. Here’s the 17th omnibus.

And a new Requiem of the Rose King, in which I expect Richard to be absolutely terrible, but in a very shoujo way.

MELINDA: Finally, something for me to get excited about. This is a series I still love.

MICHELLE: Me, too. And I like the cover very much, too.

ASH: I also love this Shakespearean reimagining. All of the covers have been excellent, and Kanno’s interior artwork is wonderfully moody, too!

ANNA: Add me to the list of people who love this series.

SEAN: There’s a new volume of Rin-Ne (the 22nd), though honestly you could swap it with any of the last 15 volumes and the content would be about the same.

MICHELLE: I missed some of the middle teens, but I have a few of the more recent volumes that I plan to read in the near future. Sometimes I appreciate a series where it isn’t necessary to read every volume in order to follow what’s going on in the present.

SEAN: And it’s been a while, but here’s the 9th volume of Tiger & Bunny.

Lastly, Yen released a numbered edition of this last month, but this month comes the mainstream release of Spice & Wolf: The Anniversary Collector’s Edition. This almost-1000 page hardcover collects all 17 Spice & Wolf novels to date, and looks like a Complete Works of Shakespeare. A must for S&W fans, though I myself will be waiting for the digital release that is apparently coming soon.

ASH: That does sound impressive!