SEAN: You thought this week might be lighter than the others? Ha! You fool!

Dark Horse has an anthology of works based on Oreimo. Unlike the anthology I’m about to talk about, it’s Japanese creators. It should be cute and incestuous, like its source. 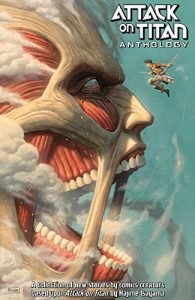 Attack on Titan’s Anthology, a collection of works by Western creators based on the manga, has been the most anticipated title of the year. I reviewed it here, and it does not disappoint. Must buy.

ASH: It really is great!

SEAN: Kodansha also has the 3rd volume of Fairy Girls, which is not as exciting as the Attack on Titan Anthology, but probably has more nudity.

ASH: Fairy Girls is probably my least favorite Fairy Tail spin-off; a shame because the basic premise had such potential.

SEAN: There’s a 5th Inuyashiki, from the Gantz creator.

And a 7th L♥DK, still trying to give us its bad boy love.

And a 10th Tsubasa Reservoir Chronicle omnibus. Didn’t this end? Is it eternal? Am I buying a cursed book? 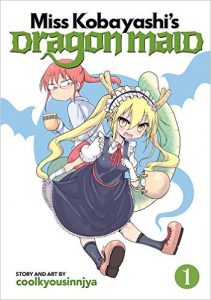 Their first debut this week is Miss Kobayashi’s Dragon Maid, another in a long line of monster girl works which permeate our world today. It runs in Manga Acton from Futabasha, which is at least not Comic Alive. The author has several works adapted to anime, including Miss Komori Can’t Decide and I Can’t Understand What My Husband Is Saying. I expect it will fall on the ‘goofy’ end of the scale, rather than ‘porn-ey’.

ASH: I am actually a little curious about this one.

SEAN: A 4th Mushoku Tensei: Jobless Reincarnation defies my ability to say anything about it.

I do enjoy My Monster Secret, though, and so a 4th volume is welcome. See? Not all monster girl titles make me sarcastic!

The other new Seven Seas title is complete in one omnibus. Tokyo Undead is part of a smaller trend Seven Seas has picked up on – zombie horror with lots of gore. It ran in Akita Shoten’s Play Comic. Don’t expect cuteness.

Also not cute is the 8th volume of Ajin, though I don’t know, given Japan’s current trends, we could get a high school AU Ajin 4-koma spinoff soon.

SEAN: Viz has another gorgeous Miyazaki artbook coming out, with The Art of Castle in the Sky. AKA Laputa, dropped from the title for reasons that should be obvious.

Tokyo Ghoul 9 gives us additional zombies, and we also get…

Tokyo Ghoul: Days, a prose short story collection about the “everyday lives” of the cast.

Is this enough for you?

MICHELLE: I am literally not buying any of these things. Not even the Attack on Titan anthology.

ANNA: This is one of those weeks where I’m glad I’m not interested in anything, because it gives me some time to catch up on all my other unread manga.