SEAN: Another big chunk of books to talk about next week. There’s no breaks anymore. 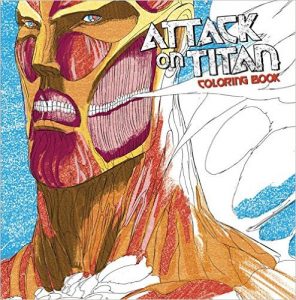 The adult coloring book has been a hot new trend for a while now, so it’s no surprise that Kodansha is getting in on it with the Attack On Titan Adult Coloring Book. Be sure to have lots of red.

Complex Age gives us a 2nd volume of cosplay drama and adult fear.

ASH: As am I! I was surprised by how much I was able to identify with the first volume. I’m also curious to see if the series will take the same direction as the original one-shot.

ANNA: I loved the first volume and am excited to read this!

SEAN: And there’s a 3rd manga volume of Ninja Slayer Kills, which is totally written by two American guys, honest.

And a 4th volume of Real Account. Has the survival game genre peaked?

And a 16th volume of The Seven Deadly Sins.

Lastly (from Kodansha, at least), Yamada-kun and the Seven Witches has hit double digits, but we still haven’t dealt with those pesky witches just yet.

SEAN: This has been out in comic shops for a while now, but Amazon has the debut of Kuma Miko from One Peace. It’s half cute slice-of-life comedy about a shrine girl and her talking bear, and half weird and somewhat uncomfortable comedy.

Seven Seas has an 8th volume of the criminally underrated Arpeggio of Blue Steel, the Tom Clancy of anthropomorphic girl series. 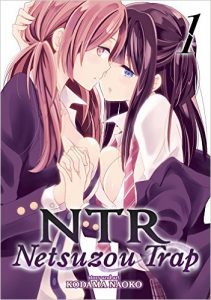 Make no mistake about it, NTR – Netsuzou Trap is about cheating on one’s boyfriend – NTR stands for ‘netorare’, the Japanese word for ‘cheating’ that has become used and abused by North American otaku. That said, it’s about two girls cheating on their boyfriends with each other, and runs in Ichijinsha’s Yuri Hime. We’ll see. My expectations are near the bottom of the sea, so…

MICHELLE: Huh. I’d definitely want to read a story like that if it were, say, josei, but the boob-smushing on the cover is not encouraging.

SEAN: And a 3rd Tomodachi x Monster, for Pokemon fans who want more death and violence.

Vertical has a 3rd omnibus of Mysterious Girlfriend X, which is highly regarded once you get past the drool thing.

MICHELLE: Which… I haven’t been able to do.

SEAN: Viz gives us a 3rd volume of the brilliant but amazingly depressing Goodnight Punpun.

ASH: Goodnight Punpun is so, so good. But, yeah, it doesn’t really make for light reading.

SEAN: And an 8th Master Keaton – I think 9 is the last? Man, I never thought we’d see this title here at all. HOT INSURANCE ACTION.

So what’s in your shopping cart?