SEAN: It’s September! Summer vacation is over, time to go back to school, and a whole lot of manga seems to be coming to a close.

Dark Horse has a 10th New Lone Wolf and Cub. There are swords in it. 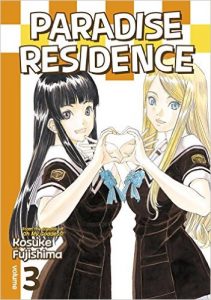 Paradise Residence wraps up with its third volume, It felt fairly inconsequential, but then so did Oh My Goddess! much of the time.

ASH: I actually didn’t realize the series was only three volumes.

SEAN: Seven Seas has a 5th volume of Citrus, whose cover looks suggestive, but if it’s like previous volumes it will have more angst than seduction.

And a 5th Non Non Biyori, which has yuri tease but otherwise could not be more different than Citrus.

Vertical gives us a 4th volume of Nichijou, which is funny and weird, not necessarily in that order, but always worth getting.

And now the rest is Viz. Bloody Mary has a 4th volume, and, well, vampires.

ANNA: I enjoy this because the vampires are so pretty, and I think secretly in love with each other.

There’s a 3rd Dragon Ball Full Color Freeza Arc, and that’s not done yet! There will always be Dragon Ball in Oceania.

I liked Everyone’s getting Married’s first volume, and am interested in seeing how far it goes with its premise. Vol. 2 next week.

MICHELLE: I’m looking forward to this one.

SEAN: Haikyu! is still monthly, with its third volume. My guess? Volleyball practice.

ANNA: I am too, it just keeps getting better and better.

SEAN: Idol Dreams continues to come out at a very slow rate, which is what happens when you catch up to Japan almost immediately. Will Volume 3 still be uncomfortable? We shall see.

SEAN: Also caught up with Japan is Kimi ni Todoke, but that’s OK, it’s always worth the wait, even at Vol. 25. 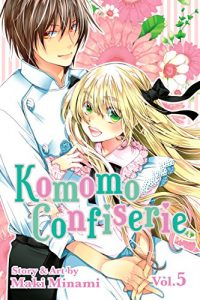 Komomo Confiserie wraps up with its 5th volume. It wasn’t a Special A, or even a Voice Over, but it was pretty good.

MICHELLE: Yeah, I certainly didn’t hate it, but I don’t know that I’d reread it.

ANNA: I liked it, but I agree, probably not a series I’d reread every few years.

SEAN: Nisekoi 17 is the first one to be released after the manga has ended in Japan. Will sales still be good? And is the harem safe? Think of the poor harem!

One Piece’s 17th 3-in-1 has reached Thriller Bark, which I wasn’t fond of at the time but has grown on me after the endless Dressrosa arc.

ANNA: SO MUCH PUNCHING!

ANNA: I’ve fallen behind on this series but I enjoy the vampires, complex worldbuilding, and angst.

SEAN: Skip Beat! is not coming to an end anytime soon, despite reaching its 37th volume. That said, we do reach a plot I’ve been waiting for since the first volume.

MICHELLE: I actually do not know anything about the plot in this volume, so now I am all excite.

ANNA: I don’t know either, but I’m always excited for Skip Beat! May it run eternally.

SEAN: World Trigger is up to a dozen volumes. And I still have almost nothing to say about it.

And lastly, the 9th and final volume of Yu-Gi-Oh Zexal, which totally wraps up the franchise forever and ever… wait, there’s already a new series solicited. Nevermind.