SEAN: The dog days of August are really dragging in my opinion, and there isn’t much coming out this week I’m picking up. But I’ll tell you about it anyway, as it’s what I do. 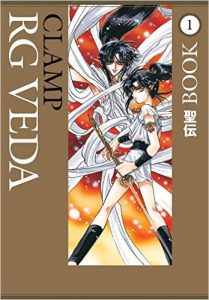 Dark Horse has the first omnibus re-release of the old CLAMP series RG Veda, which I seem to recall I found the most difficult to get into of their early works. Perhaps Michelle or Melinda can enlighten me further?

MICHELLE: I have actually never read RG Veda, either!

ANNA: I read a few volumes of RG Veda, and I agree it is hard to get into.

SEAN: Kodansha is next. Fairy Tail has a 3rd volume of its Wendy-focused spinoff Blue Mistral.

And a 5th volume of The Heroic Legend of Arslan, which may not come out that often but it’s drawn by Arakawa so who cares?

ANNA: I haven’t read this yet, I clearly need to rethink my life priorities.

SEAN: And there’s a 6th volume of L♥DK, which continues to be oh-so-bad for us.

One Peace has a 5th volume of its novel Rise of the Shield Hero.

Seven Seas has a 2nd volume of horror manga Hour of the Zombie, which does not even pretend to be cute or fluffy before going for shocks.

There’s a 4th 4-koma volume of Merman in My Tub.

ASH: I’ve read a few volumes of this series, too, and was generally amused.

SEAN: And a 3rd volume of odd survival-game-ish Not Lives.

Vertical has the 6th Tokyo ESP omnibus – it’s catching up with Japan a bit, so this may slow down soon.

MICHELLE: I do like this series, but I’m a couple of volumes behind now.

Almost all of Yen’s August releases got pushed back a week, but there are two titles mysteriously unaffected at major retail sites, so I will list them here accordingly. The 8th A Certain Magical Index novel gives us a different POV narrator, as Mikoto’s stalker junior Kuroko gets her own series of adventures.

And The Irregular at Magic High School’s 2nd volume wraps up its first arc.

Do you want something from this list, or is it just too hot to read?