SEAN: The dog days of August are here, but there’s still manga to keep you cool.

If you like Neon Genesis Evangelion but wish there was less drama and more high school harems, then Dark Horse has you covered with an omnibus re-release of the first 3 volumes of The Shinji Ikari Raising Project. At 16+ volumes, this spinoff is actually longer than the original manga.

Kodansha gives us a 6th volume of reverse harem comedy Kiss Him, Not Me!. 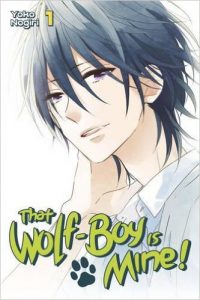 The debut this week is also shoujo, from Kodansha’s breakaway hit magazine Aria. It’s called That Wolf-Boy Is Mine! No prizes for guessing what the lead boy’s amazing secret is, and I’ve heard it compared to Fruits Basket a bit.

MICHELLE: I’ll be checking this one out, and the Fruits Basket comparison is reassuring, since I was worried it’d feel more like Twilight or something.

ASH: I’ll admit, I’m a bit curious about this one.

ANNA: I’m curious too, but I will reserve judgement until after you guys read it!

SEAN: One Peace gives us another omnibus of not-really-yuri license rescue Maria Holic. I think this catches us up, so volumes after this should be new.

Vertical has a 2nd volume of To the Abandoned Sacred Beasts.

Viz gives us a 19th volume of Dorohedoro, which I always look forward to, even if I still am a bit lost on the whole Caiman/Kai/Ai thing.

ASH: This week may have relatively few releases, but it does still have Dorohedoro!

SEAN: And an 8th volume of Tokyo Ghoul, still popular.

Lastly, for all your tokusatsu needs, there’s a 5th volume of Ultraman.

Is there a title here that piques your interest?