SEAN: For a 5th week of the month, there’s a surprising amount of stuff coming out, though it’s nothing compared to April, which features 895,623 new and ongoing series. But it’s still March, so what’s happening next week? 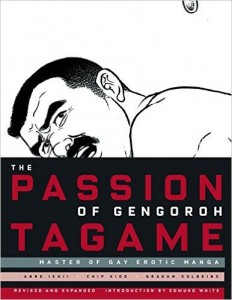 The Passion of Gengoroh Tagame is getting a re-release from the Bruno Gmuender publisher, giving you more of the famous gay manga author. I know a lot of people who are eagerly awaiting this.

ASH: I’m so glad to seeing this coming back into print, and with additional content, even!

ANNA: I’m not likely to read this manga, but I think it is great that the market now supports publishing titles like this. I can’t imagine this being published 10 years ago.

SEAN: Kodansha has the 13th and final volume of My Little Monster, a bumper volume not only featuring various sequels and side stories to the main plot, but also selected highlights from the fan book! A must buy.

MICHELLE: And buy it I shall!

SEAN: And The Seven Deadly Sins is also at Volume 13, but is nowhere near its final volume.

UQ Holder reaches Vol. 7, and by now has given up any pretense of being anything but a sequel to Negima.

And there’s a 6th volume of shonen romance Your Lie In April.

Seven Seas gives us an 8th volume of always interesting if sometimes a bit uncomfortable series A Centaur’s Life.

MICHELLE: I don’t suppose we could parlay the survival game trend into a license for Yumi Tamura’s 7SEEDS, eh? 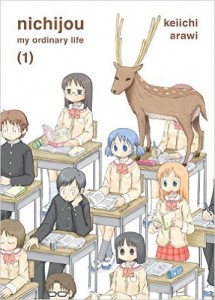 SEAN: Speaking of familiar genres, Vertical debuts Nichijou, a humorous slice-of-life high school comedy – NO WAIT COME BACK! Nichijou is fantastic! It’s very weird and quirky (as the cover might indicate), and has some great characters. I’ve been eagerly awaiting it. For fans of Seki and Sakamoto.

ASH: I have heard good things, and I’m a fan of Seki and Sakamoto, so I should probably pick this up.

MICHELLE: I read a chapter or two of this, but should try to get back into it.

ANNA: Yay! I enjoy this series.

ANNA: I need to catch up on Scarlet Empire – I think I bought the first volume and it disappeared into the mass of titles on my kindle.

SEAN: Is there a title here that cries out to your heart?