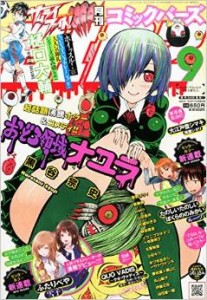 My stated intention for writing the Magazine no Mori column is to introduce the western audience to the vast, complex mass of manga magazines that are published in Japan. Where we have Shonen Jump only, a visit to a major Japanese anime/manga store will paralyze a western fan with the sheer number of magazines to choose from. But once you get past the number of magazines, what really impresses is the variety. And that variety is what I hope you can see when you look at my column. Action, romance for guys and girls, comics for children, for adult men and women and some interesting, creepy, creative and weird stuff around the edges. Which brings us this month to Gentosha Publishing’s Monthly Comic Birz (月刊コミックバーズ) magazine.

Birz‘s major claim to fame here in the west is as the official home of Hidekaz Himaruya’s Hetalia – Axis Powers. And it totally fits the “island of misfit manga” feel that the magazine has always cultivated. I wasn’t at all surprised to learn that gothic horror Red Garden manga (illustrated magnificently by Kirihito Ayamura and written by Gonzo) has run in this magazine  – it was worth reading for the clothes alone, as was Peach-Pit’s Rozen Maiden. Just about the time I came across the manga for Penguindrum (illustrated by  Hoshino Lilly, written by Ikuhara Kunihiko as Ikunichowder) and Yurikuma Arashi (illustrated by Morishima Akiko and written by Ikuhara as Ikunigomakinako) which are running simultaneously right now, I suddenly realized that Birz series are probably better known in America as anime than as the manga that run in the magazine. Also interestingly, Comic Birz is the home to the most recent series by popular creator Kia Asamiya, Kanojo no Carrera, in which he is able to draw sexy adult women and sports cars to his heart’s content.

The website for Comic Birz has sample chapters for all the currently running stories, upcoming releases, an editor’s blog, and links to various other Gentosha magazines. The magazine costs 650 yen/issue ($5.47 at time of writing) for about 650 pages.

Comic Birz has, for at least the last decade, cultivated a sense of the weird, with one foot firmly in the Horror genre, as you can see by the cover illustrating this review. Birz comics are sometimes disturbing, often outrageous, occasionally violent and almost always unrepentant, which is what I especially like about it. They’ve also just invested themselves heavily in Yuri manga, which I know means we’ll get stuff that makes me cringe, but it’s also more likely to have murder and mayhem than blushing confessions. Phew.