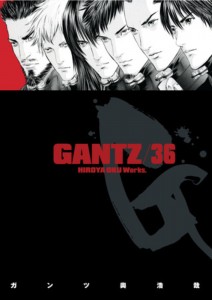 We’re aaaaaalmost done with Dark Horse’s release of Gantz, but not quite. Vol. 36.

SEAN: Kodansha has a 9th My Little Monster, which hopefully will continue the development the 8th volume had.

SEAN: Seven Seas gives us a 5th volume of SF action series Arpeggio of Blue Steel, my favorite of the ‘young girls and military’ licenses.

Viz has another volume of its Monster Perfect Edition, the 5th. Expect happiness and rainbows.

ASH: This is the volume with the epic library scene, isn’t it? And who doesn’t love libraries?

ANNA: Honestly this is the one title this week that I’m happy about, because I do want to tackle reading Monster at some point. Sometime after I read all my stockpiled volumes of 20th Century Boys.

SEAN: And a 5th Resident Evil, with puppies and kittens.

Lastly, Terra Formars 7, with love and peace for all. Please do not try to read all three Viz releases at once this week. You will die.

ASH: That is a distinct possibility. 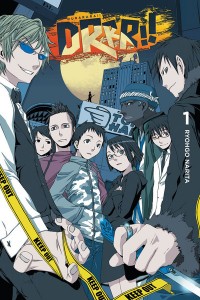 SEAN: And now Yen. Light novels first. The 4th Accel World should resolve the cliffhanger from the last one. Will Chiyuri be a traitor? I highly doubt it.

The debut this week is the highly anticipated Durarara!!. Yen has had the manga for some time now, but the novels are also excellent.

MICHELLE: Hm! I liked the manga more than I thought I would, but drifted away when the Saika Arc started.

ASH: I really should give at least one of the versions of Durarara!! a try at some point.

SEAN: Log Horizon’s 2nd volume will hopefully give us the hinted plot from Vol. 1 about the twins, if the cover doesn’t lie.

And there’s a 2nd No Game No Life, which I hope will have less naked 11-year-olds and more awesome mind games.

On the manga side, we have the 4th Accel World manga, still not the novel.

A third Akame Ga KILL! will live up to its name, if the previous two are any indicator.

Black Butler hits a new milestone with Vol. 20. It’s sad when a series catches up with Japan, isn’t it?

MICHELLE: I continue to read this, even though I am not madly in love with it.

ANNA: I stopped after the first couple volumes. 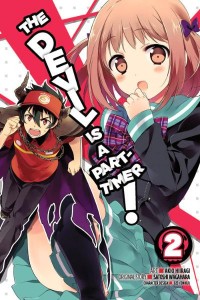 SEAN: A Certain Magical Index’s manga will continue to adapt Novel 1 with Vol. 2. Really, we need graphs and charts.

The Devil Is A Part-Timer! joins the growing list of manga adaptations of light novels also coming out, with Vol. 2 of the main manga. Wait till next month, it gets more confusing.

SEAN: And now we get DRRR’s manga, which has a 3rd volume of the Yellow Scarves arc. At least that novel won’t be out till 2016.

Final Fantasy Type-0 Side Story, Vol. 1: The Ice Reaper is one of those manga whose title pretty much sums it up. I think the Main Story manga came out with the English release of the game.

First Love Monster is another one of those Aria shoujo titles, which means we’ve no idea what we’re going to get. The artist has done some Book Girl manga adaptations.

MICHELLE: It looks sort of kooky, but that might be fun!

ANNA: I will wait to see if Michelle likes it before reading it!

SEAN: Inu x Boku SS has an 8th volume – will it reset again? Or just give us more yokai action? 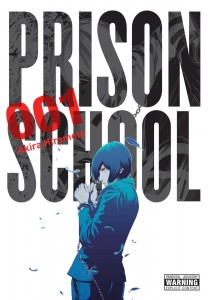 More manga adaptations of light novels, as we get a 2nd Kagerou Daze, which finishes adapting the first LN and starts the 2nd.

Karneval oddly ended up on the worst manga of the year list at SDCC, though I found the first omnibus more… diffuse than anything else. Vol. 2 will have more focus, maybe?

ASH: More focus would be good.

ANNA: I was curious about the first volume, but now I’m sort of glad I skipped it.

SEAN: Another Puella Magi Madoka Magica spinoff begins, with Homura’s Revenge. Can’t be a depressing manga with a title like that!

Prison School is a much anticipated omnibus that many said was too ecchi to actually get a North American release. But no, here it is. I wonder what it’s about?

ASH: B-but it’s by the creator of Me and the Devil Blues! (I’ll admit, I’m curious about this one.)

So I Can’t Play H! has a 2nd volume, and gloriously no light novel license yet, meaning I only have to worry about this for the moment.

Lastly, we get the final – I checked this time – volume of Soul Eater NOT!, bringing the Soul Eater franchise as a whole to a close.

Is there something in this giant list that catches your eye?