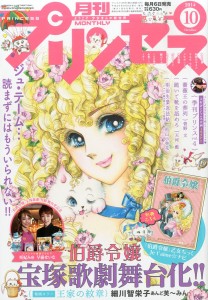 We’ve had kings galore here on Magazine no Mori, with Young King Ours and Dengeki Daioh, and we’ve met the Queen of all Shoujo, Nakayoshi, so it seems fitting that we’ll spend some time with a princess or two. In Monthly Princess (プリンセス) magazine, everyone is royalty.

Princess magazine is wall-to-wall stories about the rich, the powerful, the magical, and the beautiful orphaned daughters of dukes with whom they fall in love. The stories may take place in far-off places and times, fantasy settings, or may be set in current school or office, but the concepts are the same. The woman (who is no longer always in need of rescuing) will be the center of attention. Ironically, the series pictured on the cover of this issue never originally ran in the pages of Princess. Hosokawa Chieko’s “Hakushaku Reijou” was a series that ran in Hitomi Comics, from 1979-1987, but which has been resurrected here to celebrate the Takarazuka version of this oh-so-classically shoujo manga series about an orphan who is actually a duke’s daughter, the powerful man who saves her life, but lies to her, and her cat, Mimi. (A performance that I was honored to be able to see in person and my goodness, was it chockful of shoujo tropes!)

The Princess website instilled in me a sense of deep cognitive dissonance. On the one hand, the  page lists Princess, Princess Gold, Elegance Eve, Petit Princess and other wholly girly magazines, but just above them are listings for the Champion family of magazines, including Champion Red, which is openly women-loathing and misogynistic in ways that make my jaw ache.  The fact that these are all bunched together almost makes me suspect of Princess and it’s apparently-wholesome-but-actually-not-at-all obsession with love. Romance, it seems to say, is the opium of the female masses. The website itself is more informative than interactive. Akita Shoten, perhaps more used to selling to hardcore otaku, doesn’t seem to want to look you in the eye as it talks.

Princess monthly has been published since 1974 and reading it gives one a sensation of stepping into a more innocent past. And only a very few of the titles that have run in Princess have skipped to other media – they are few, far between and unknown here in the west. At 630 yen ($5.30 USD at time of writing) per issue, for about 600 pages, you’re getting a lot of fantasy bang for your buck.