SEAN: The final week of May brings us a manageable and tasty selection. If this week is too much manga, next week is juuuuuust right. 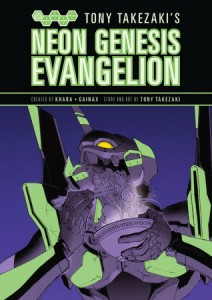 When the Evangelion Comic Tribute came out, one of the more popular contributing authors was Tony Takezaki, who long-time manga fans may recall from a manga called Genocyber. His take on Evangelion, though, which Dark Horse puts out next week, is pure gag format.

Technically this is out this week rather than next, but as always I never know when a Fantagraphics title comes out till I get a shipping notice. But who cares if it means an 8th volume of Wandering Son, woo hoo!

MICHELLE: I feel like a poseur for saying “Woo!” when I am so far behind, but “Woo!” nonetheless.

ASH: I just got my copy! It makes me so happy that this series is being translated.

ANNA: I will join Michelle in also saying “Woo!” and being behind in reading this very worthwhile series.

And there is also an 8th volume of The Seven Deadly Sins.

MICHELLE: Interesting. I wasn’t aware of this one, at all. Not sure I could stomach that many hard-to-like characters, though.

SEAN: One Peace has a 2nd Aquarion Evol, which is spelled correctly and also not a villain after all.

ANNA: The first one for sure seemed like it would appeal to fans of the anime, but the volumes are a bit slim on the page count. 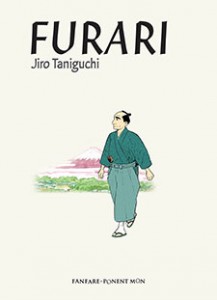 SEAN: Meanwhile, Ponent Mon has another Jiro Tanaguchi volume, this one set in the Edo period, called Furari. Every Tanaguchi release should be greeted with joy. (I could swear this has come out before in some way, shape or form. Am I wrong? Ponent Mon does tend to re-release…)

MICHELLE: I’m not sure. I know it’s been sitting in my Amazon cart for ages, but possibly that was because it was supposed to come out a while back, but never actually showed as “In stock.” In any case, yay for more Taniguchi!

ASH: I believe it was initially planned to be released last year or the year before and that we’re only now just seeing it after a significant delay. Should be good, though!

SEAN: Seven Seas gives us another Alice volume, this one with the Twins as the boyfriend du jour. I hated the last volume focusing on them; hopefully this will be an improvement.

They also have an 8th volume of gaming fantasy World War Blue.

Vertical has a new Attack on Titan novel, Kuklo Unbound. This one will seem more familiar to those reading the Before the Fall manga.

ASH: Yeah, I’ll probably be reading this one.