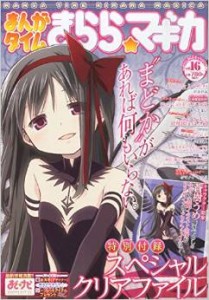 When an anime or manga franchise is exceptionally popular in Japan, it is often marked with special issues of a current magazine, or a short run of a dedicated magazine of it’s own. You can see examples of this with a long-lived franchise like Gundam. Gundam has been around for decades in one form on another – so long that it is effectively a genre unto itself. One almost expects that the anime and manga world honors Gundam with a dedicated magazine.

The Puella Magi Madoka Magica franchise was almost the complete opposite. It was designed from the outset to fully saturate the Japanese market. Anime and manga, otaku merchandising, high end accessories, make-up, clothing (for men and women), bags, movies…for a while you couldn’t walk through a shopping arcade in Japan without stumbling across something that was Madoka-themed. And so, although the series is not long-lived in any meaningful way, it isn’t all that surprising that Hobunsha, the publisher of the many Mangatime Kirara imprint magazines also has a Mangatime Kirara ☆ Magica (まんがタイムきらら☆マギカ) magazine. (Hobunsha is also the publisher of all the spin-off stories of the Magica franchise.)What did surprise me was the magazine’s longevity. It’s currently at 18 issues. If you’ve ever tried to publish a magazine, you know that that is a lot of content. For a relatively recent series, it’s an amazing amount of content.

Mangatime Kirara ☆ Magica is a hybrid magazine. Because it is focused on a specific franchise, the pages include gag comics, slice-of-life, action, comedy and tragedy stories. The characterizations are as much “fanon” as they are canon, with popular pairings and fandom-created character quirks used freely. But, this magazine is, ultimately, a corporate created tie-in meant for fans of the series, rather than truly fan-created derivative work.

The magazine does have a website, which is mostly focused on selling the manga, artbooks and other tie-in publications for the series. The website has individual spin-offs and publications reading samples, costs and purchase data and not much more. Because this is specialty magazine, there are no circulation numbers available. The magazine costs 780 yen an issue ($6.52 at time of writing) for 250 pages, plus a series-themed gift. (The above issue came with a fetching clearfile of Devil Homura, as seen on the cover. Which is why I bought it. ^_^)

This is a magazine for fans of this series, full stop. No one else would care to read 200+ plus pages of jokes about Kyouko being hungry, or Mami at home or maid Madoka. But for 18 volumes so far, enough people do that Mangatime Kirara ☆ Magica is alive and well, with stories of Magical Girls living banal lives in our world and fighting Witches in their magical world.