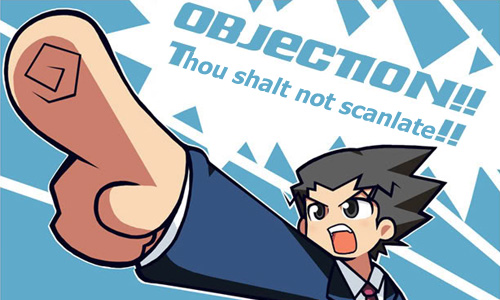 Um, I guess this is the best image I could find? Credit to AnimeKon.

It started this week, when Ash had posted a link to Kodansha’s Tumblr that weighed in on piracy. Interested in reading what they said, I checked it out, and after sitting on this idea for a day, I decided to get in contact with all the manga publishers in the US and basically asked them for a response to that query. So a shout-out to he or she who decided to ask the question, and to Ash for linking to it.

I should already preface this by saying that, after reading the responses by the publishers, feel free to discuss your overall position on the situation, because discussion is good, and especially for those who live on the side where you do read manga that has no chance of being published in English for a multitude of reasons, it may be something you want to know. Or maybe not know about!

Note: as a heads up, this post may be updated with publisher thoughts as the day goes on. It’s their choice whether to respond or not.

Anyways, here they are (let’s start with the one who started this chain off):

Today, here’s how our process works. We read series as they begin serialization in Kodansha’s magazines, and we keep an eye on the promising ones. If it’s by an author or from a franchise we’ve had success with, that’s a major bonus. Kodansha Japan will come to us to with the series they want to push in the future. We also consider which series may get an anime presence. All of these factors are more important than fan requests online. Though there was a time when most publishers referred to scanlations during licensing, and maybe some still do, we don’t. The other manga publishers I’m familiar with don’t either.

This is not because we don’t pay attention to our fans. It’s because we’ve learned from experience that highly-requested series usually produce sales that come in under expectations. The biggest reason is that, unfortunately, heavy social media users are just not representative of a majority of English-language manga fans. But it can’t help that most of the target audience has already read the series online, and thus isn’t very motivated to buy.

When series, usually seinen series, that are frequently requested on social media as a result of scans do get licensed, sales might be okay for Vol. 1 and sometimes 2, but they drop far below expectations on Vol. 3+. My personal hypothesis here is that people who’ve read the scanlations maybe remember to buy Vol. 1 or 2 because they want to support the artist, but by Vol. 3 and later they either forget or feel they’ve done their part. But the publisher is still on the hook for five, ten, fifteen more potentially money-losing volumes.

So, given the choice (and we usually aren’t), I would rather start from zero with a series I strongly believed in and try to build an audience for the legal release than be forced to compete with illegal scanlations that people have already been reading for months or years.

It doesn’t mean we’ve given up on “fan favorite” series. Vinland Saga was highly-requested and highly-scanlated for years. We took lots of extraordinary measures to try to break the “seinen curse,” producing premium hardcover editions with a bonus story, exclusive author Q&A, and other extra content. We also made them 2-in-1 editions to reduce the number of volumes we’d have to release. Whether that has worked or not is still an open question. Though Vol. 1 is doing well, it is discouraging to see basically no change in the popularity of the scanlations since we licensed the series.

Finally, consider: We’ve received some asks about whether having a manga available in English on a legal manga site makes a print version less likely because people have already read it. Well, illegal scanlations have an impact that’s many times bigger than any legal manga site. Something to think about.

So, what can you do? Well, you can stop reading scanlations, and encourage friends to do the same. I have never read more than a single chapter of a series in scanlation, and I have read a lot of manga (not all of it in Japanese). There is enough excellent manga out legally in English to fill all of your leisure time. ALL of it. And it’s increasingly available digitally at an affordable price.

If you still need a little piracy in your life, the least you can do is stop reading series that have been licensed. If you want to see what happens next, wait for the official release to catch up. You’ll survive the wait, I promise. And please spread the word about licensed releases! It can be hard for publishers to get scan readers informed about the legal version.

I don’t think it’s a “bad thing,” mainly because I don’t think that value judgments like “good” and “bad” are useful to the conversation. The assumption implicit in this question is that the legitimacy of scanlations should be measured primarily by their potential impact on sales. While that’s no small issue, it’s not the main one, which is this: with a few notable exceptions, every mangaka and doujinshika I have ever spoken to about their work being scanlated hates it. From the creator’s perspective, the point is not whether the work is officially released in English or any other language, but that their work has been appropriated by people they don’t know and then used in ways they never consented to, even if it’s being done with good intentions.

— If fan interest online ever compelled them to go back and take a second look at a title?

You can basically copy and paste Kodansha’s Tumblr post on scanlations here. In other words, no. As fans ourselves, we’re definitely aware of what people are talking about online, but in our market there’s not necessarily a direct correlation between what’s popular online and what people actually buy. In fact, sometimes there’s an inverse correlation, not only with seinen and josei, as the Kodansha post indicated, but also markedly with shoujo. Also, if a midlist or potentially more modest-selling title has been heavily scanlated that can act as a disincentive for us to publish it since we know we’ll be faced with diminished sales out the gate.

When was it ever a good thing? This is not a good or bad thing. This is an issue of right or wrong. It is wrong to take un-consented or unlicensed materials, scan them, translate them and distribute them. This is stealing- YES, stealing. This is never OK. This is WRONG. Knowing this and you still want a “scanlation-like” action in your life? Come work for me at Digital Manga Guild, and we’ll pay you a portion of the sale. I could always use more translators and letterers.

Not really. There is no magical publishing formula that says “this book will sell well because it has a huge fan interest on line.”

Justin is the Editor-in-Chief of Organization Anti-Social Geniuses, an anime and manga blog. Currently is on an anime backlog adventure. You can follow him on Twitter @Kami_nomi.