I didn’t get much reading done this week besides Fairy Tail Vol. 36, of which I will be writing a review shortly. I did pick up the first volume of The Seven Deadly Sins, and will be giving it a read through this week. But let’s jump right ahead into the latest Weekly Shonen Jump chapters.

Seraph of the End Ch. 014
I admit to finding myself a little bit intrigued. I still do not consider Seraph of the End a good manga, but the concept of the humans using what appear to be some kind of fallen angel based power, is actually somewhat intriguing. So often powers in manga are derived from demons or monsters, but to see powers derived from angels is rare. And for those angel powers to be more dangerous, if not quite what I have in mind when I think of angels, is all the more curious. It’s enough to make me wonder what happens next, but I still hate all the characters and all the past baggage this manga has been dragging along. 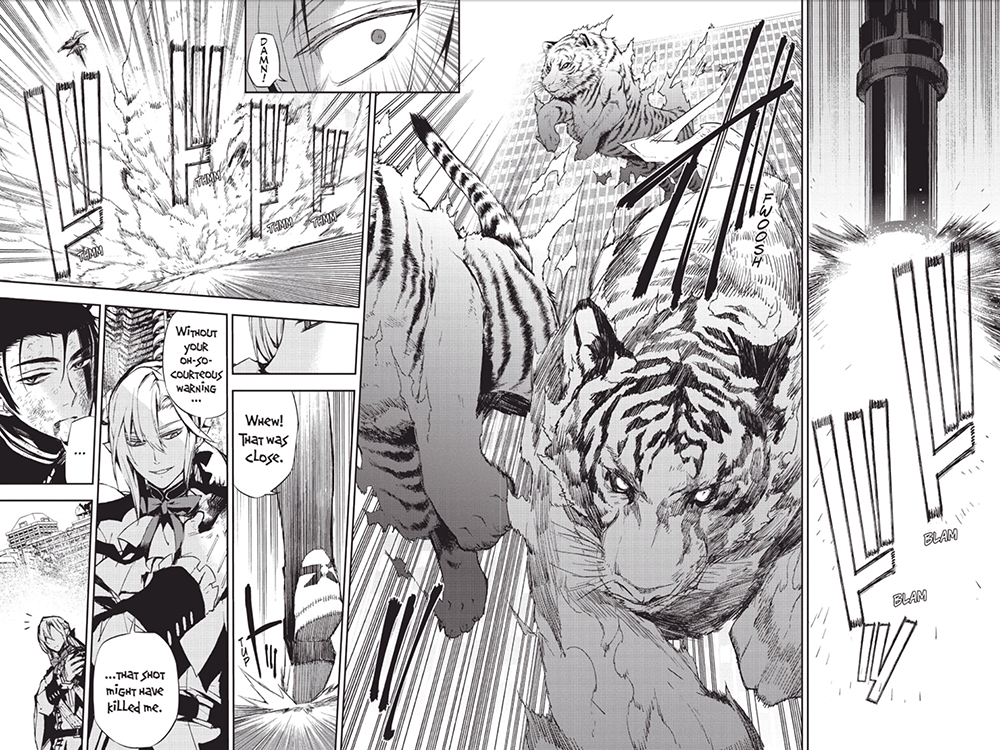 One Piece Ch. 742
Talk about a range of emotions, from being heartbroken at the tragedy that is Kyros’ backstory, to being disappointed at Usopp’s foregone defeat, to being amused and somewhat terrified by what has to be the wackiest, and most frightening, set of faces Oda has ever drawn. I don’t want to go into spoiler’s on Kyros’ backstory, let’s just leave it at “stuff’s messed up yo” and look forward to the mess that DoFlamingo will have to deal with next week when all the toys turn back into humans. 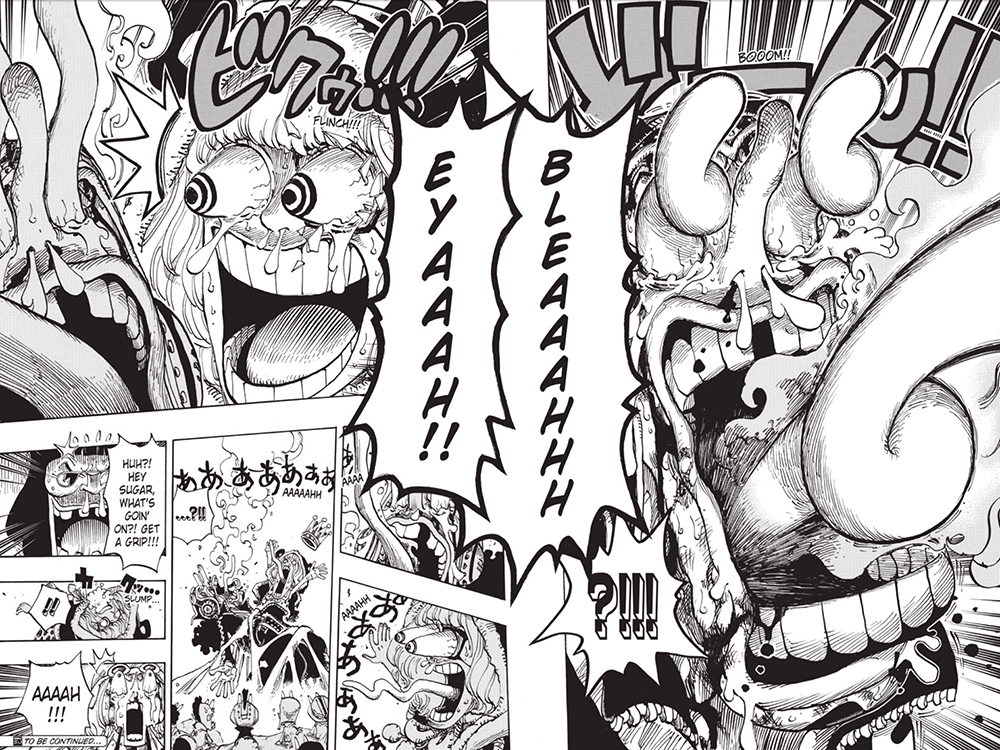 World Trigger Ch. 054
The ongoing action in this story has been excellent. We end with another cliffhanger, but it’s once again one of the good ones, and not the cheating kind where a piece of information is withheld. Rather we continue with cliffhangers of the “They’re boned” variety. The humanoid neighbors are turning out to be just the right level of powerful to really push the power limits while also not going overboard. There’s a certain balance to this story that I can’t help but appreciate.

All You Need Is Kill Ch. 010
Not only do we get an explanation to all the weirdness going on, we also end Rita’s flashback. The information shared about the story is certainly interesting, but the way it is shared with the reader is a bit strange. Rathe than focusing on the viewpoint character we learn all this information without him having learned it. It comes across as being incomplete, and doesn’t really fit how this kind of story should be told. It definitely feels more like how a novel would be written, with a narrator changing who the viewpoint character is, which feels very out of place to the story as it had been told before this flashback.

Naruto Ch. 670
Every once in a while I’ll read a chapter of Naruto that makes me feel a little bad for how much I like to dump on the series. And then I get a chapter like this one. Which shows just how inept the writing has gotten. Not only is the comedy middling at best, but the central focus of the story, and I feel no shame in spoiling this, is about how Naruto is the reincarnation of a character we were only just introduced to this very chapter. See, this kind of reveal loses some of its impact when half of the reveal contains information that was not important enough to be introduced to us until just now. Granted it’s the weakness of the serialized medium, you can’t go back and insert foreshadowing where you want, but there is a certain gravity that revealing a character is the reincarnation of a historical figure who we’ve known about for the entire series, versus the complete apathy the same kind of reveal incurs if said historical figure did not exist in the series before this chapter.

And to make things worse, what started out as a subtle “Naruto and Sasuke’s battle has happened before with other characters”, has become hammered in so heavily that one would think Kishimoto doesn’t trust his readers to get it. We got it back when the parallel was between Naruto, Sasuke, Sakura, Jiraiya, Orochimaru, and Tsunade. We became a bit annoyed when that parallel was again brought up with Kakashi, Obito, and Rin. Now with the parallel being brought up again with the Sage’s son’s I’m a bit insulted that you think I didn’t get it the first time. And if there turns out to be a girl involved in that third parallel then I might just go from insulted to irately enraged. If Sasuke turns out to be the reincarnation of the older Son, which he inevitably will, then I’m done with this series. 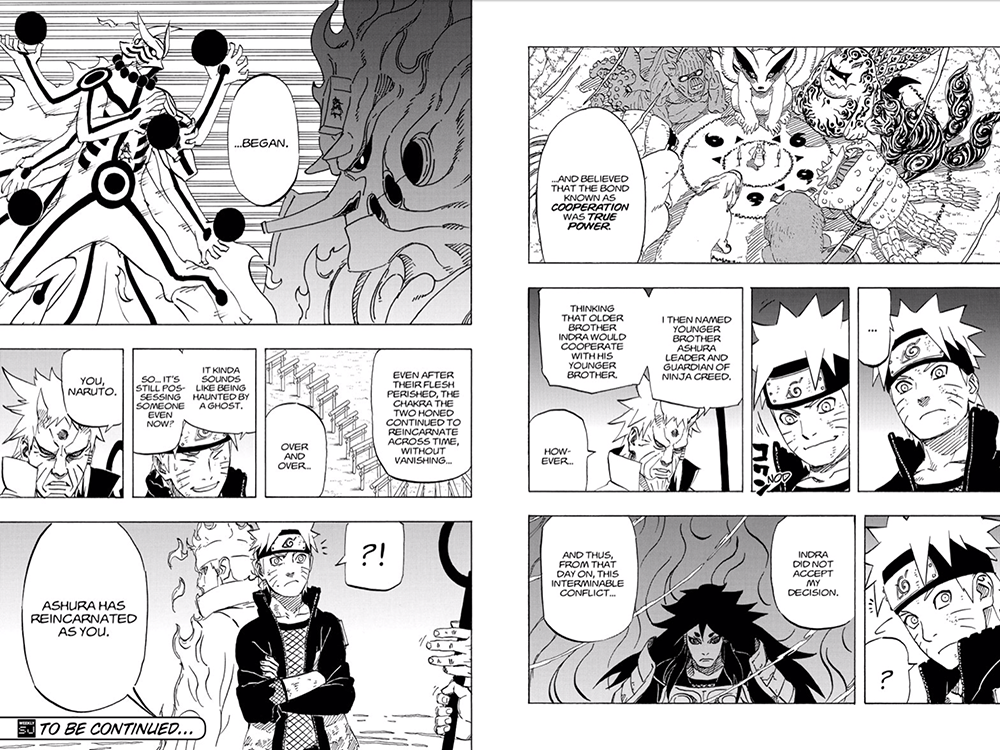 Toriko Ch. 271
Sometimes humor is out of place. But with Chichi the Nitro (I think he is at least), I think I’ll let it slide. There’s just something about him that I can’t help but like. Even if he brings out the sleaziest parts of Toriko and the gang as they start bartering for Chichi’s help with women’s clothing. Jeez, Toriko, you’re not even married to Rin yet and you’re already exchanging her clothes for services. Well, at least you’re not like Goku who offered up Bulma’s breasts to that old Kami pervert and then had the gall to insult his own wife by saying her breasts were not firm. Yes, this is a thing that happened. Look it up and try and disagree with me the next time I say Goku is the worst husband.

And yet, I enjoyed this chapter because it foreshadowed exactly how much bigger this series is going to get. 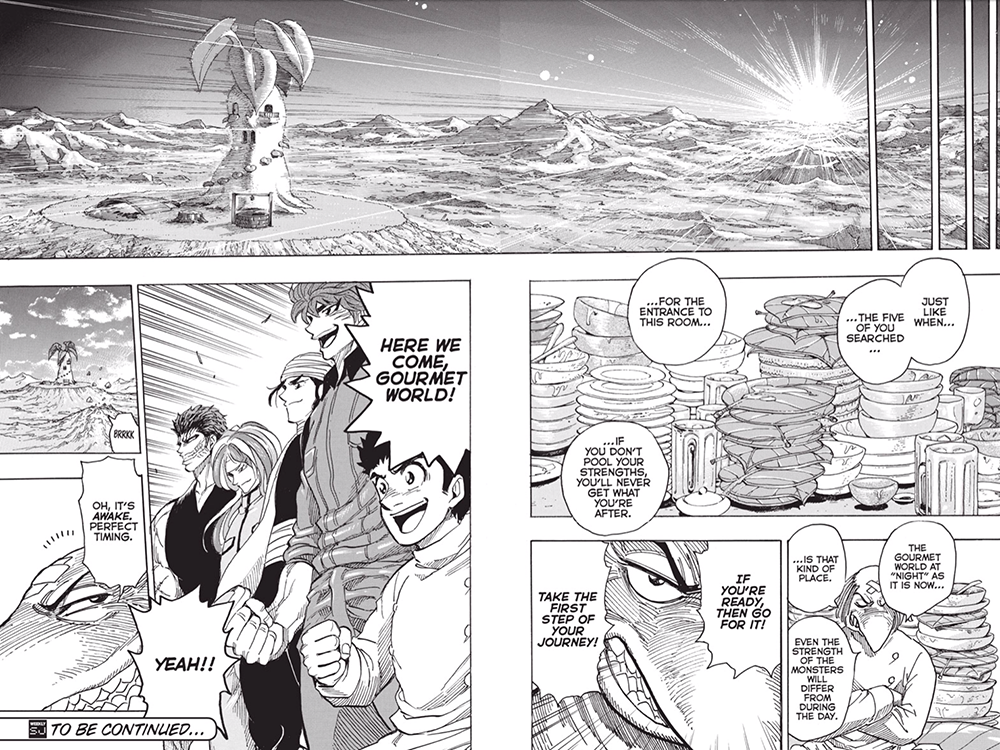 Nisekoi Ch. 116
After the excellent Ruri story I’m a bit disappointed that the followup chapter would be so lackluster. The story itself is fine enough, but the age old “the girl is a terrible cook” has already been done here. And to better effect as at least Onodera makes food that looks good. Though I do appreciate how Chitoge at least isn’t being unreasonable about Rakku eating her food. At least she appreciates his effort.

Stealth Symphony Ch. 006
At the moment this manga is stuck in the phase where all I can really say is “it’s a manga”. This is because it has neither done anything horrendously terrible, nor has it done anything amazing yet. The concept that Jig is going to be fighting against the first friendly people he’s met is certainly interesting, but it does feel like the relationship between the characters needed to be developed first before we got this confrontation. A few more one off chapters wouldn’t have been amiss. There’s a reason some of our favorite manga started with single story chapters before moving onto larger stories, it’s to build up the characters. At the moment I don’t have any particular attachment to the characters so I can’t really say that I’m particularly invested just yet. I’ll need a better reason to root for the characters, other than the fact that they are there.

Bleach Ch. 574
Remember those old roleplaying forums, where people would create characters and write up stories together without any set rules for how the characters’ combat abilities worked? This chapter felt like a battle between the most hated participants in those role playing forums. The guy who had no limits to his character’s powers, and just made it all up as he went along, and the guy that had no imagination at all, but would constantly insist that his opponents attacks did nothing.

That is, 100%, exactly what this chapter is. And seen from that point of view it is actually kind of glorious. Already the stupid action that any Kenpachi fight is was entertainment enough. But with that realization I skyrocketed this chapter to quite possibly one of my all time favorites for Bleach. And now you too can enjoy this chapter in a way you never could before. You’re welcome.