SEAN: Before we begin with next week’s books, apologies to Yen Press, as I accidentally forgot one of THIS week’s books in my last post. Wolf Children: Ame and Yuki is a deluxe omnibus hardcover based off the movie franchise, and in a similar vein to Summer Wars. It’s definitely worth your time.

MELINDA: I’ll definitely be reading it! 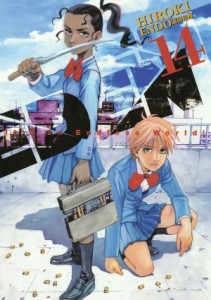 SEAN: Now let’s see what actually is out next week, and we’ll start with a long-awaited release from the purgatory of Dark Horse Poor-Selling Manga. Eden: It’s An Endless World has reached its 14th volume, a mere 2 1/2 years after its 13th. That said, it’s here now, and I’m sure it will be worth the wait for its many… well, selected fans.

MICHELLE: I am ashamed to admit that I actually completely forgot this series existed.

ASH: I’m still glad that Dark Horse found a way to keep this series in print. Plus, I can actually read the tiny text in the larger omnibus edition.

SEAN: And Dark Horse also has the 2nd Shinji Ikari Detective Agency, which I believe is also the final volume. This shoujo take on Evangelion ran in Kadokawa’s oddball shoujo magazine Asuka, and is for Shinji and Kaworu fans in particular.

This month’s Alice in the Country of Clover gives us a new love interest, in case we were tired of Blood or Elliot. Nightmare has sort of been an eccentric mentor to Alice in the previous books, we’ll see how he steps up into the role of lead male here, in his eponymous book.

SEAN: I’m pretty sure this 5th Dance in the Vampire Bund omnibus wraps up the main series. 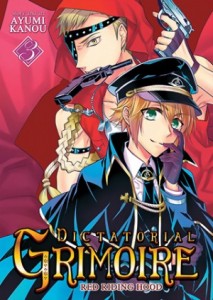 I’m not sure why the final Dictatorial Grimoire volume is separated out from the others with the Red Riding Hood suffix, but in any case, feel free to think of it as Vol. 3.

This volume of Strike Witches: Maidens in the Sky is also the final one for this particular series, but expect more Strike Witches spinoff manga soon.

Bleach has hit Vol. 60! Though if you take out the chapters involving someone showing off their Bankai, it’s actually only 15.

SEAN: Dragon Ball is still in Full Color for this 2nd volume, and I think is still actually Dragon Ball Z. Someone needs to verify this for me.

The 8th and final Hana-Kimi omnibus will interest even fans who got it the first time around – this has the “After School” chapters that got a separate release in Japan, but I don’t think were ever published here until now.

ANNA: Oh! I have all the original volumes, but I might be picking this up if there are new extra chapters!

Happy Marriage?! gets halfway there with Vol. 5, so I guess we’re halfway to happiness? At least there’s sexy times now.

MICHELLE: This brings to mind an Anya quote about being “upside down and halfway to happy land.” :)

ANNA: I do enjoy this series!

MELINDA: As do I!

SEAN: I believe that with the publication of this volume of Hunter x Hunter, the 32nd, we are caught up with Japan, where its creator is on another extended hiatus. 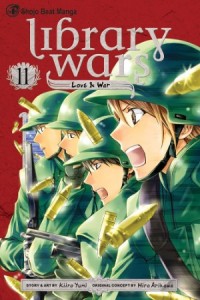 I love Library Wars, and simply can’t wait to dig into this 11th volume. It’s gotten better as it’s gone along, too. Shoujo action at its best (well, OK, Dengeki Daisy is better, but not by much).

MICHELLE: Library Wars has definitely gotten better as it has progressed, to the point where I’m surprised by how much I like it now.

ASH: I always loved the premise of Library Wars and am happy to see the series starting to really live up to its potential.

ANNA: I have also always loved this series, even if it helps to suspend disbelief a lot at the idea of library censorship battles being fought with military action. It really does get better as it goes along.

SEAN: After One Piece 70 earlier this month, and Bleach 60, we naturally have Naruto 65, splitting the difference. Is Sasuke still evil?

And because today is Shonen Multiples Of Five Jump Day, here’s Nura: Rise of the Yokai Clan 20.

Sweet Rein 2 has taken a while to come out, but I’m hoping this volume of a Santa and her reindeer will be as quirky yet sweet as the first one.

MICHELLE: I’ll be reading it!

ANNA: This is a very cute series.

SEAN: Lastly, will our heroine be able to hold onto her princely voice at last and move up in the voice acting world? Here’s Vol. 4 of Voice Over: Seiyu Academy to tell us.

There’s pretty much something for everybody here. What are you getting?