World Trigger Ch. 051
Have I ever mentioned how much I hate fake cliffhangers? You know the type, the ones that make it seem like something shocking has happened, but then turn out to be not at all what we thought? This chapter only gets away with it because Kitora was absolutely badass the entire chapter through. And it’s at the end of this chapter that we get the true “they are so screwed” cliffhanger.

Kitora has easily become one of my favorite characters for the whole series. It would have been so easy to have her been an antagonistic kind of character, and in some ways she can be, but she also backs up her attitude with action. And even though she had to be saved by Yuma during her first battle of the series, this week we see how she takes that moment and uses it as motivation to win against the strongest type of trion soldier we’ve seen this entire arc. Too bad it took so much out of her to defeat just one of them, now that she’s left facing several I don’t see this ending well for anyone involved. I can only hope someone has the presence of mind to force a bailout for all the C Rank agents before they get captured. 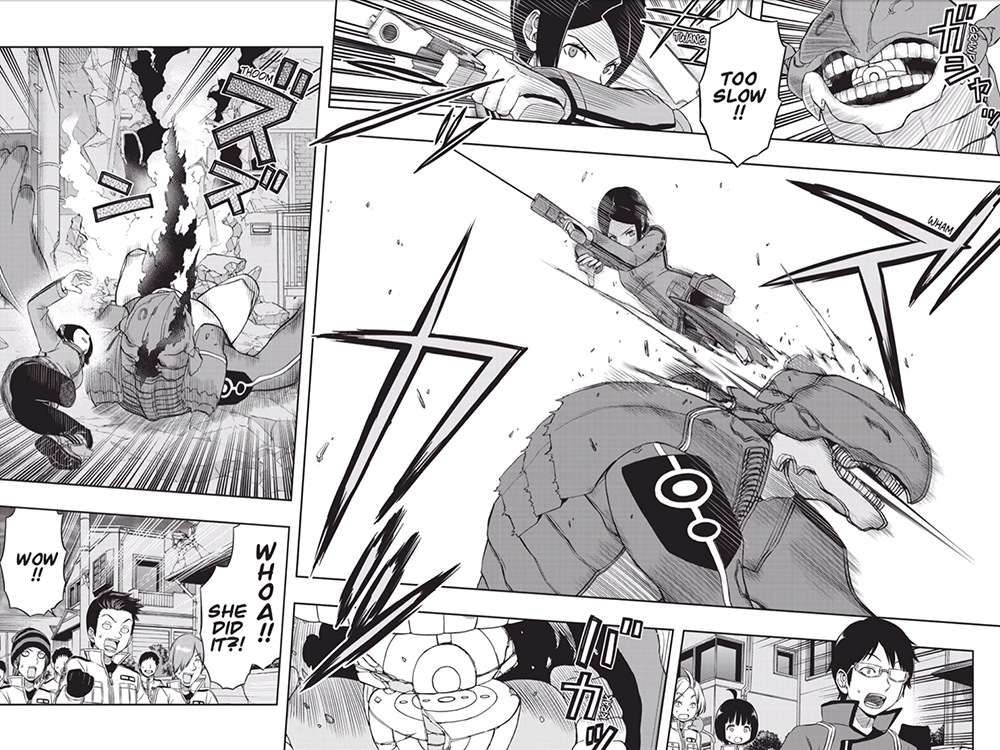 One Piece Ch. 740
For a moment, as I skimmed through this chapter again to think of what to say, I found myself at a loss. Stuff happens this chapter, but none of it really stands out. Though I did enjoy Baby 5’s interaction with Law as a bit of comedy. Then I got to the last two pages, saw that Robin had been turned into a toy, and remembered exactly what I wanted to talk about this week.

Usopp’s reaction to being mistaken for some great hero was funny and all, but in the past he’s reacted like that but he’s always come through for his friends when they need him. Which is why the last page of this chapter pisses me off to the point where I am barely able to keep my language at a level appropriate for an all ages audience. Usopp running away this chapter is quite possibly the worst thing he has ever done in the entire series. It’s not like he’s even running to draw the enemy away. He is literally running because he’s too chicken-sh…cowardly, to stand up to his opponents. He’s not making a strategic withdrawal, he fully intends to abandon the Tontatas, and Robin (though he doesn’t remember her anymore). What happened to “I can’t laugh with my friends if I’m not willing to fight like them”?

This is character regression pure and simple. Now perhaps Oda has a plan, he usually does. And I’m willing to wait and see how this goes. But if Oda intends to just laugh it off later on then I will have to call bull…crap…on this most boneheaded of moves. If this is meant to be taken at face value, without any twists in Usopp’s actions later on, then it’s nothing but Oda showing that he can’t think of anything else to do with Usopp. It’s already annoyed me how he continues to be a coward despite his progress throughout the series. I feel that we’re at a point where the cowardly Usopp character just does not work anymore. After all he’s gone through, he can’t bother to man up at all?

Again, like I said, maybe Oda is going somewhere with this. So until then I will reserve judgement. I will just simmer in frustration, waiting for the tipping point where I either calm down or explode in a rush of fury and fanboy indignation. 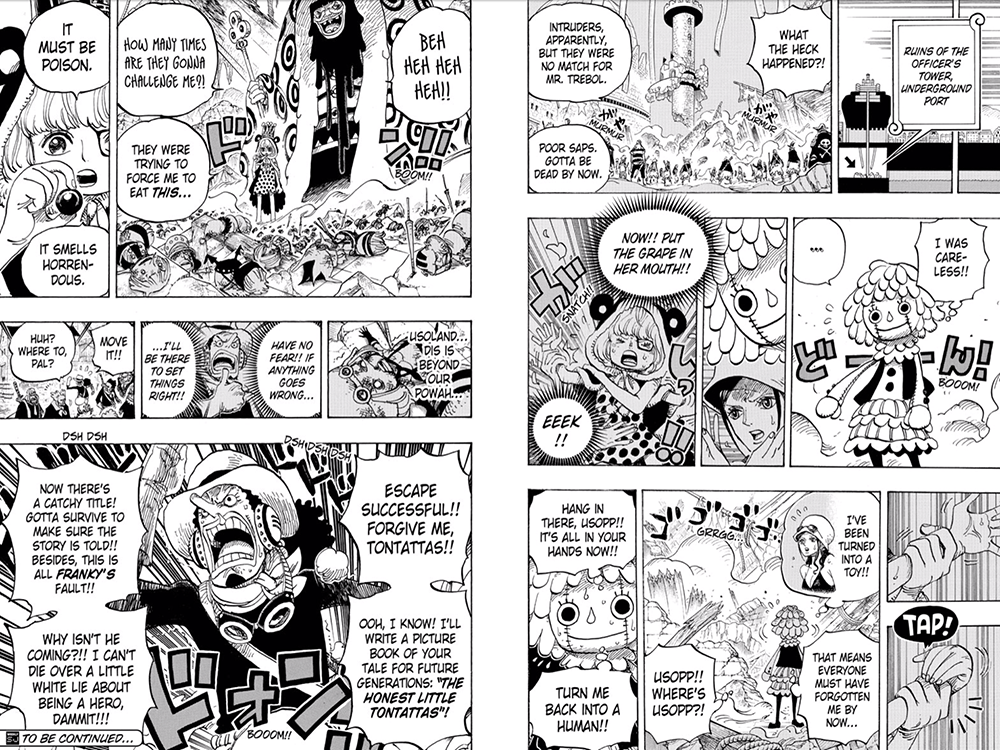 Nisekoi Ch. 113
While Raku playing the fake boyfriend again is amusing, I kind of wish this chapter had just been about Ruri and Shu. Just imagine how much funnier it would have been had she been forced to pretend to be the girlfriend of the one guy in the cast she completely despises. But, I suppose that will have to wait for my eventual fanfic, the story as we got it was excellent.

Ruri has always been one of my favorite characters of the series, even though she doesn’t get much focus. I just can’t help but enjoy the deadpan snarky characters. And seeing young Ruri’s pictures were particularly funny. And her grandfather, while following the typical goofy grandpa archetype, has a certain charm to his design that I haven’t seen before in any of the other manga I’ve read.

The sudden tone shift at the end I could have done without, but the way the scene is set suggests that I might just get a stronger focus on Ruri and Shu without Raku next chapter. Which would be much appreciated. 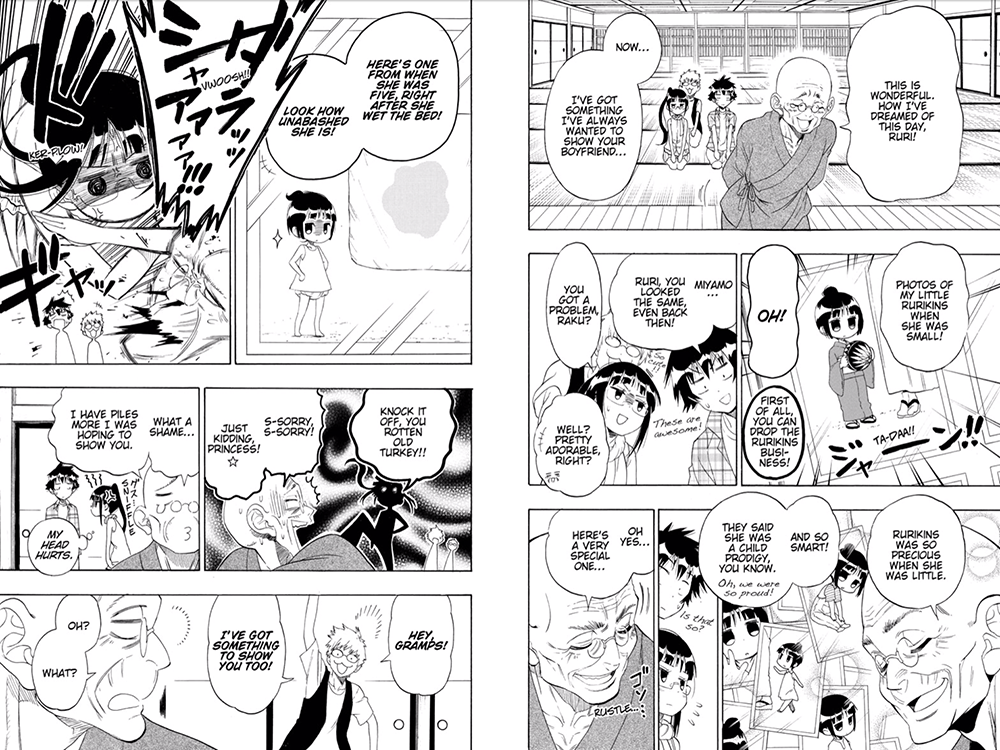 Naruto Ch. 667
It is my opinion that it is a sign of a weak, unimaginative mind to always go for the sexual reference. But I mean come on! 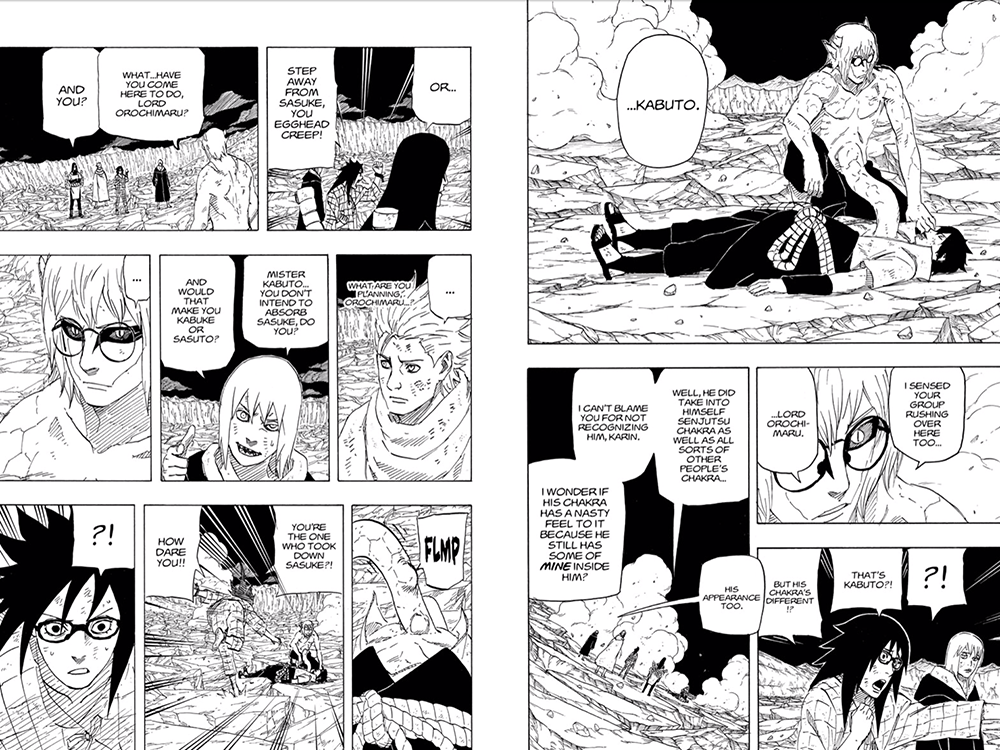 The imagery in this page is so phallic even the cover art of the Little Mermaid VHS Tape is thinking Kishimoto has gone overboard. Sure it’s coming from his stomach, and not his crotch, but I dare ANYONE to look at that and not immediately think “Penis!”. I can just see Orochimaru thinking, “Damn, Kabuto beat me to it!”

From there we get a pretty strong focus on Kabuto being a changed person, and I don’t care because Kabuto was never my favorite character.

On the other hand, Gai’s half of the chapter was great. Methinks next week we’ll get to see him go out in a blaze of glory, though I really was hoping to see Rock Lee jump in and save the day. Just randomly he shows up, beats up Madara, and becomes the new hero of the series. I wouldn’t even be mad if that happened it would be such a troll move by Kishimoto.

I imagine we’ll be seeing Samui and her brother making a return next chapter, since apparently TenTen is playing around with the Sage’s artifacts, so I can only imagine this is Kishimoto’s way of getting those characters back.

Stealth Symphony Ch. 003
It’s refreshing to see the old trope inverted this time around. Rather than having Jig automaticaly join V&V Security it turns out he’s actually not qualified. I imagine he’ll eventually join them, because one cannot escape tropes forever, but for now it shows a level of awareness on the part of the writer that will serve the series well.

Souya also appears to be an interesting character that I imagine will be around for quite a lot of the series, and the way the assassins guild operates in the city is in its own way quite intriguing. While we are only three chapters in I like how the story has been handled. Nothing groundbreaking yet, but in its own way it is shaping up to be a competent little story. Whether it can keep it up or will lose steam has yet to be determined. 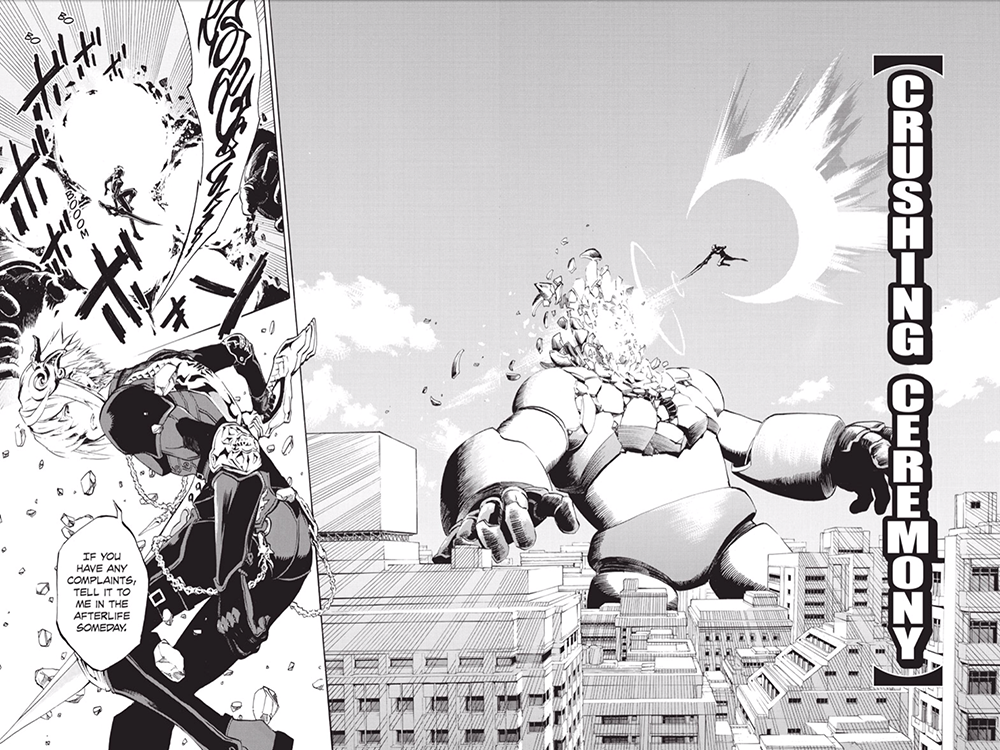 Bleach Ch. 571
Now this was the first chapter of Bleach in a long time that I can legitimately say I really enjoyed. Bleach has been in the limbo of not being terrible yet not being great either. It barely manages to be good most of the time instead opting for being dull and confusing. This time around it feels like Kubo is back to his old form. The power Gwenael Lee (whose name I refuse to remember, much like the names of any of the other Stern Ritter) is quite imaginative. Though it does have the problem a lot of the other Stern Ritter powers have in that I keep asking myself how exactly they still Qualify as Quincy.

But seeing Yachiru kick ass is entirely worth it. And her shikai release feels so nostalgic for Pre Hueco Mundo Bleach that I can’t help but enjoy this chapter entirely. I can only hope that we get to see the releases for all the other Soul Reapers that we haven’t seen yet. 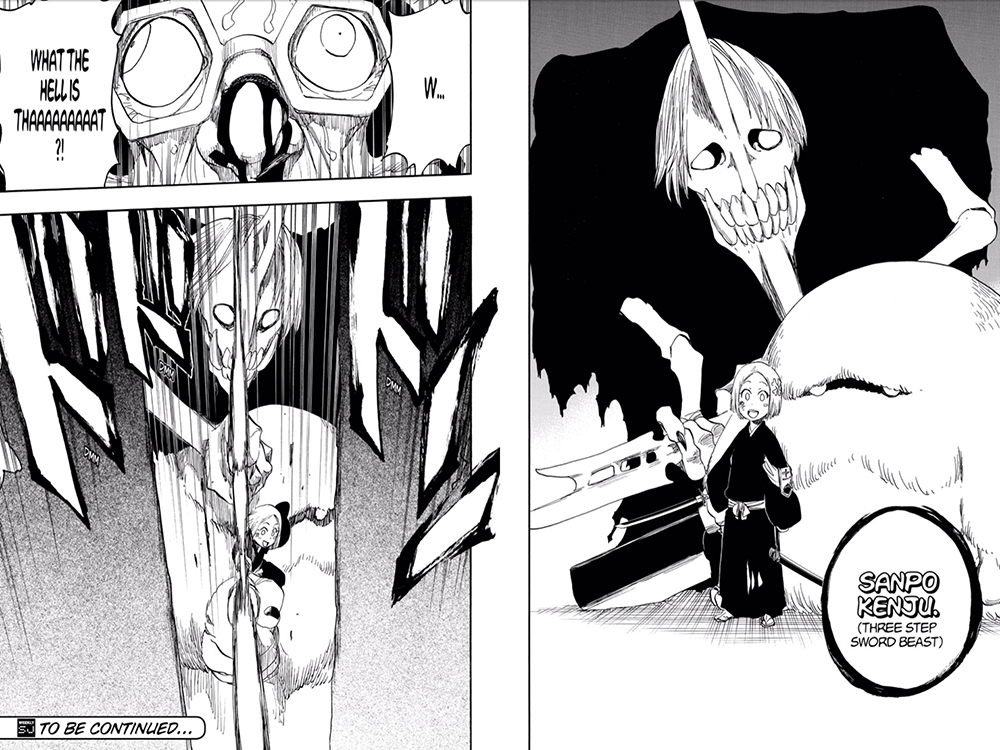 One-Punch Man Ch. 034
After seeing Saitama defeat so many enemies easily, I’m looking forward to what Boros can do. It’s pretty ridiculous, though that’s the joke, that nobody but Saitama can reach invincible status. But as the series has grown more and more serious it would have been a bit of a stretch to have every enemy be easily defeated by Saitama. I can only wait and see what happens next chapter, as One-Punch Man moves into what I can only describe as a new era. Can it keep up the quality even as it becomes a more generic battle series? 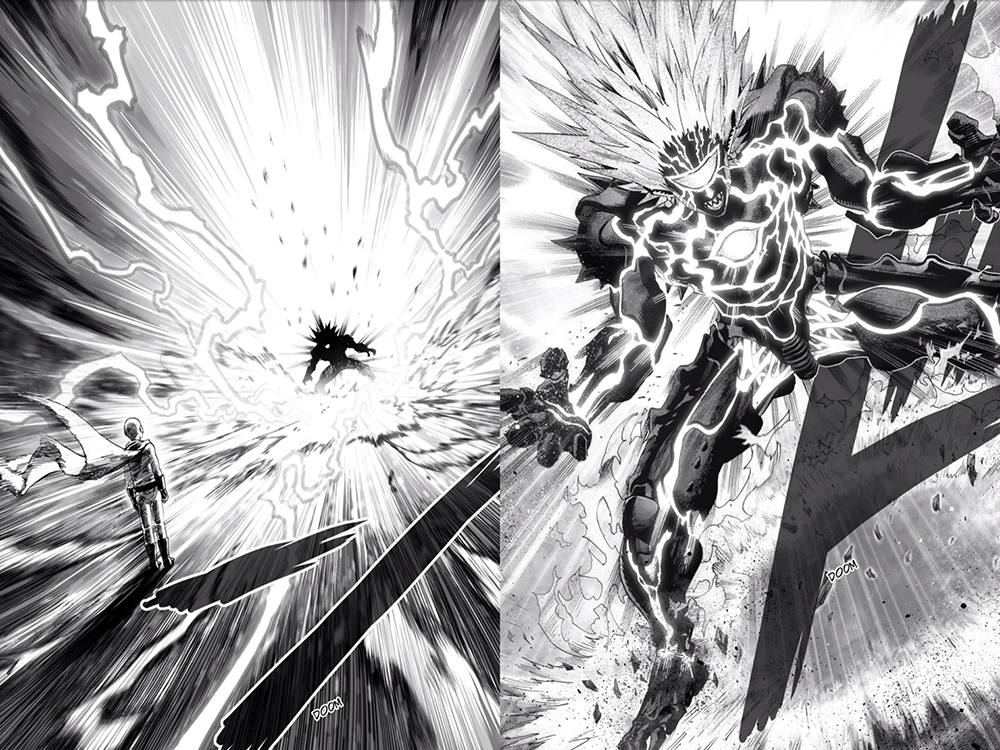 Toriko Ch. 269
Methinks Shimabukuro has been in a shippy mood, now with Komatsu interacting with Nono for the first time, though we’ve seen her express interest in him in the past. While personally the image of Komatsu hooking up with Melk the Second is more entertaining (I don’t know why, but for some reason short guys with tall women amuses me. Must be why I still like Tom Cruise despite his crazier antics in the past). And I find it odd that they are going back to the Gourmet World so soon. And while I don’t mean to focus so much on the relationship aspects of this series, I can’t help but wonder whether Toriko and Rin plan to get married before he goes to the Gourmet World, or if she’s planning to wait until they return which would make no sense since they don’t know if they’ll be back. Or maybe she’ll go with them, I don’t know. I’d prefer the latter, it would be more entertaining.

Still, I wish for this arc to be over with. I’ve had more creepy pedo scientist than I can stand. And the more I see Shima playing the traitor the more I don’t buy it.