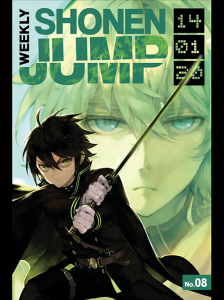 I think this was one of those rare weeks where I enjoyed all the chapters. Well, almost all, there was one or two I didn’t care much for. But I can’t say there were any terrible chapters this week. I’d almost say I’d rather have a week where all the chapters are good rather than one or two chapters be amazing while all the others are terrible.

Unfortunately we start the week off with one of the less than great chapters, which during my first read through did not bode well for the week.

Seraph of the End Ch. 009
Pro Tip: If you want me to give a chapter a good review, perhaps consider not starting it with underage nudity. When I started reading this series I thought that we would be subjected to many things, but I never would have thought blatant underage fanservice would have been something I’d have to deal with. I guess my naiveté got the better of me this time around. Still, this makes me wonder how exactly Shokugeki no Soma is too risqué for the manga when they just published some pretty heavy nudity in this manga.

Besides getting off to a bad start, and the attempts at humor falling as short as always, the rest of this chapter wasn’t actually terrible. The fights were good, we had a decent enough twist halfway through the chapter. So overall it was the most tolerable Seraph has ever been. Though it does raise questions such as why the Imperial Demon Army would abandon people outside their walls. Sure maybe they don’t have space. But they aren’t exactly abandoning these people to death per say. They’re abandoning them to become the nourishment of the enemy. Last time I checked it was good strategy to deny your enemy resources whenever possible. Ancient armies would often slash and burn their own crops to deny sustenance to their invaders. I doubt vampires would be very hard to fight if they were denied food. So methinks the Demon Army is fairly incompetent. Not only are the abandoning their own people, but they’re doing it in a way that only makes the enemy stronger. 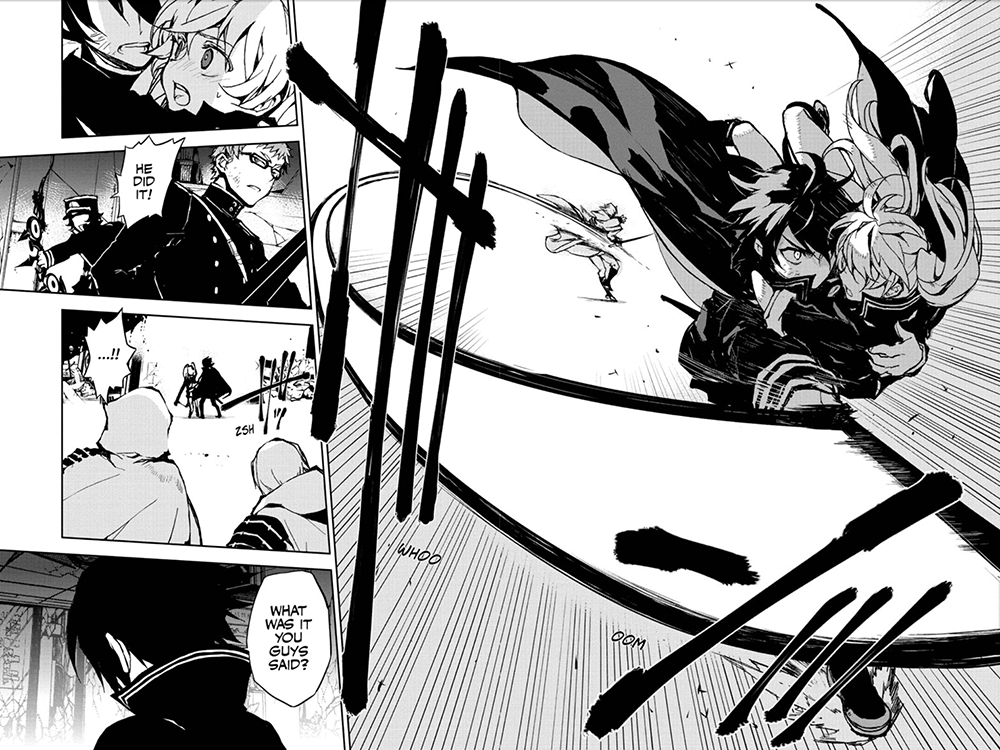 One Piece Ch. 734
I’ve been waiting for Cavendish to get that little extra something that would round him off as a character. He was already better than expected, but still missing that extra flair that Bartolomeo had gotten several chapters ago. And this week we finally got it. Cavendish having a split personality may not be the greatest twist, but I think that’s because I may be unfairly comparing him to Bartolomeo who is easily my favorite character of the arc.

This week is another chapter that mostly spends its time setting up the final climax of the arc. I can’t say how long it will last for, but we are moving into the phase of the story where characters start pairing off for battles. And considering we haven’t seen all of Doflamingo’s group I’m particularly looking forward to what happens next week. 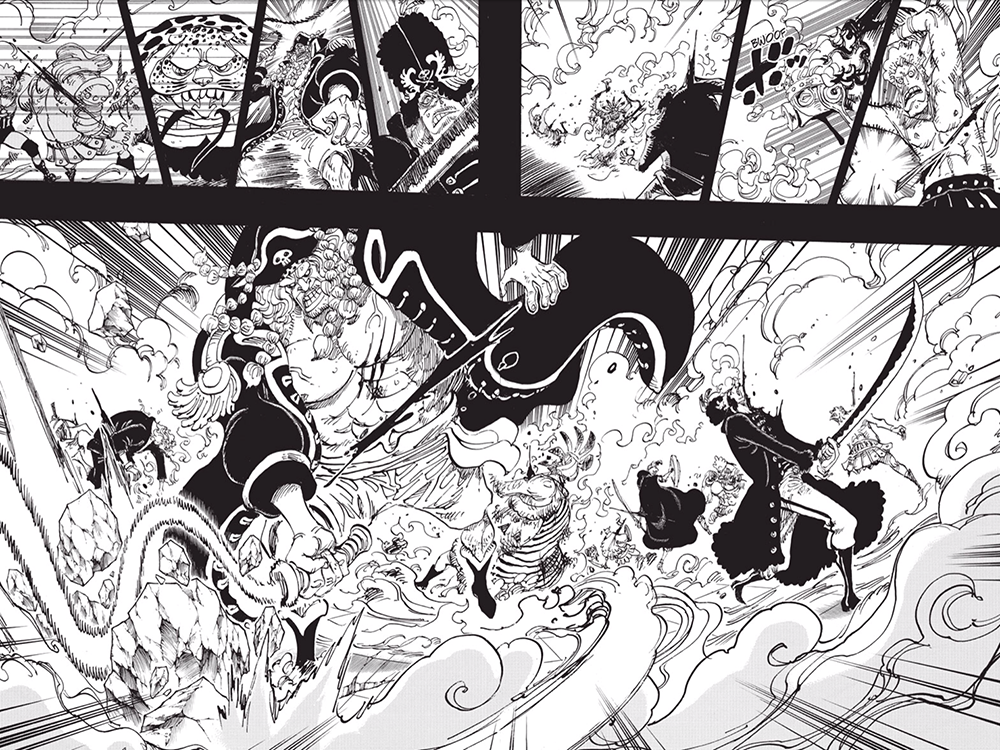 Naruto Ch. 661
This week, despite Madara going on about stuff we’ve already heard about, was actually pretty good. We’ve got plenty of dramatic tension with Naruto in the process of dying to make up for Madara’s verbosity. And to make things better Madara finally does what I’ve wanted to do this entire series! So all things considered this chapter is a win.

Bleach Ch. 564
I’m a bit worried that Kubo is going to go the route of “Everyone gets a power up because they didn’t actually know their bankai’s name”. It works once, and only once, but if it happens again it will only be because Kubo likes power ups, even when it makes absolutely no sense. 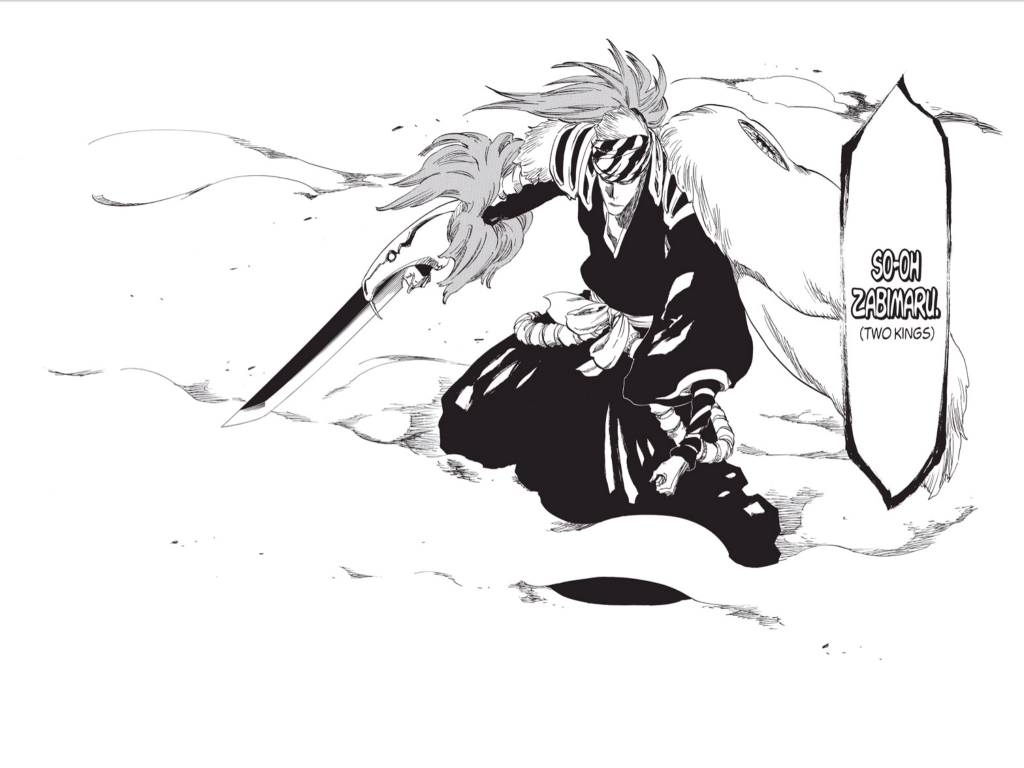 Still, seeing Renji actually win a fight makes this chapter worth our time. Though I will miss his previous bankai, which I thought was really clever, if underpowered.

World Trigger Ch. 046
After seeing an incompetent army in Seraph, it’s nice to see some competency in Border. The majority of the chapter focuses on figuring out how to defeat their enemy. And since it’s done in an intelligent way with the setbacks caused not by the incompetency of the characters, but rather by the advantages of the enemy, gives me hope for the future of this manga. It’s just good writing to have setbacks in conflict be caused by the enemy and not because the enemy hasn’t done anything special, the main characters are just moronic. So yes please, more intelligent characters please. 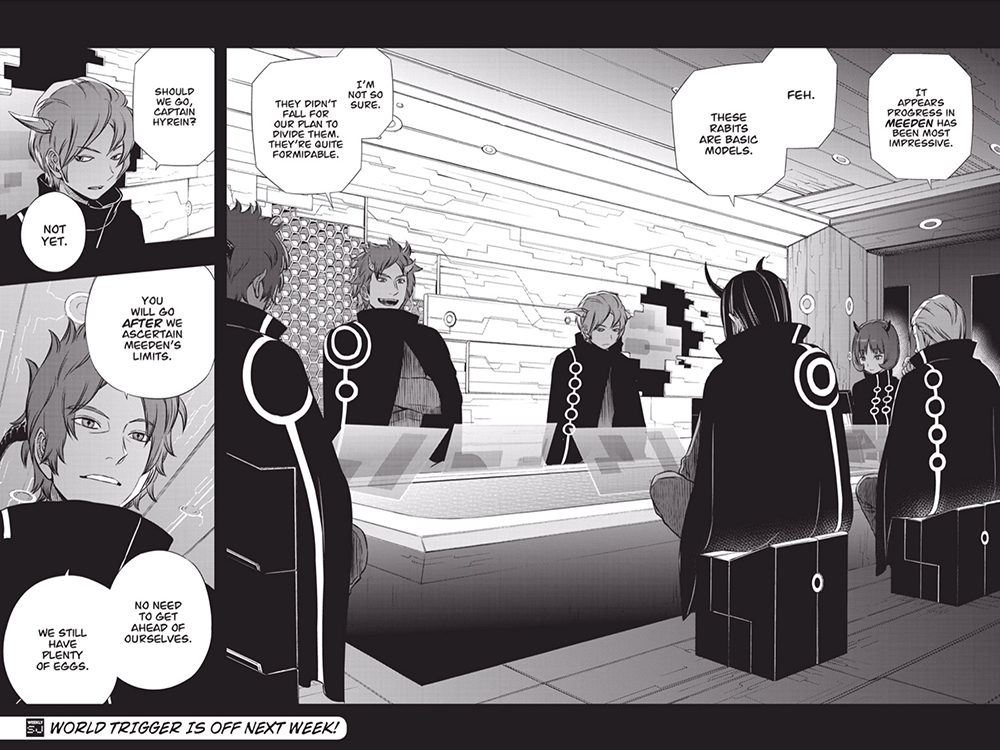 Nisekoi Ch. 106
Sometimes seeing fictional characters suffer is hilarious. And considering that Nisekoi is all about the facial expressions for me I have to rate this chapter quite high. There was almost an overload of great faces Chitoge made throughout the chapter. And the resolution of her lost hairband was perfectly paced for a one chapter story. It seems a lost art among manga to write single chapter stories. Which is a bit of a shame, but probably happens because writing an ongoing narrative is an easier way to keep interest. One still needs to write it well, but I think the individual chapters need to be much better in single chapter stories to get readers back the next week. An ongoing story, while good, can have some chapters that are setup and don’t have proper payoff at the end, and readers will come back because they want to know how it all wraps up.

Dragon Ball Z Ch. 047
One of my big peeves with Dragon Ball is how a lot of the problems are made worse because Goku refuses to end the threat in favor of getting a better fight. It makes him seem dumber than he actually is, but at least this time around Goku acknowledges that his desire to keep Vegeta alive is a bad idea. It doesn’t make it any smarter but there’s something to be said for someone that knows they aren’t very smart vs. someone who has no clue.

With the fight finally over we can get back to some more character moments before we move on to the next conflict. Personally I prefer those chapters so I look forward to next week.

Like I said, this was a good week. Even the series I normally love to hate were actually enjoyable on their own merits and not because of the joy I get from ripping them apart. Though in the case of Naruto, again, it’s because I’ve wanted to do what Madara does at the very end of the chapter for years now.