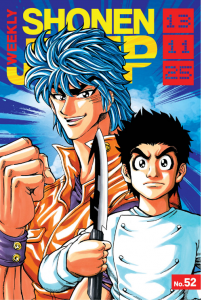 It’s another one of those weeks, where I must apologize for galavanting about being a responsible adult and not making time to write about manga. For this I sincerely apologize. And to save you all from having to read through three separate reviews I say we keep things simple this week and just give a basic overview of my opinions the past couple weeks.

Nisekoi Ch. 98 – 100
Nisekoi has been great the past few weeks. Getting a backstory for Onodera was unexpected but much appreciated. I particularly enjoyed seeing things from her point of view because all of Raku’s reactions in the chapter can be explained by the fact that he’s got a crush on her, but she has no idea. The Tsugumi chapter was great, even if it followed a formula that this series has used before. The fact that it focuses on something a bit less stereotypically girly probably helps. And of course, with chapter one hundred we get an entire chapter focusing on Chitoge. And while she isn’t my favorite character of the series, this most recent chapter provides all of the goofy expressions and comedy I’ve come to expect from Nisekoi. So there are no complaints. Though now I wish the series was about Chitoge’s parents instead of her and Raku.

Naruto Ch. 654 – 655
We finally got rid of Obito, and it looks like he’s going to get his redemption yet. Which I wouldn’t mind, if it weren’t for the fact that Kishimoto has basically been making him more annoying with each passing chapter. And, if nothing else, we get an entire two page spread with all the cast of Naruto looking like they’re completely constipated. And no, I am not above making those kinds of jokes.

One Piece Ch. 727 – 729
If there was any doubt that Doflamingo was a bastard, well these past several chapters executed those doubts gangland style. Kinda like what just happened to Law. The absolute destruction of the faith the people had in King Riku wasn’t bad enough, but then Doflamingo goes and kidnaps the King’s daughter and forces her to work for him in exchange for her father’s life. It’s confirmed that Violet is Viola, Princess of Dressrosa. Which would explain why she destroyed the TV showing Rebecca’s fight, what with that being her niece and all. Right now the question remains, who of Rebecca’s parents was the child of King Riku. My guess is her father. I could go into more detail here, but so much happened and a lot of it is spoilers, but it certainly looks like we’re moving into the final stages of this arc. 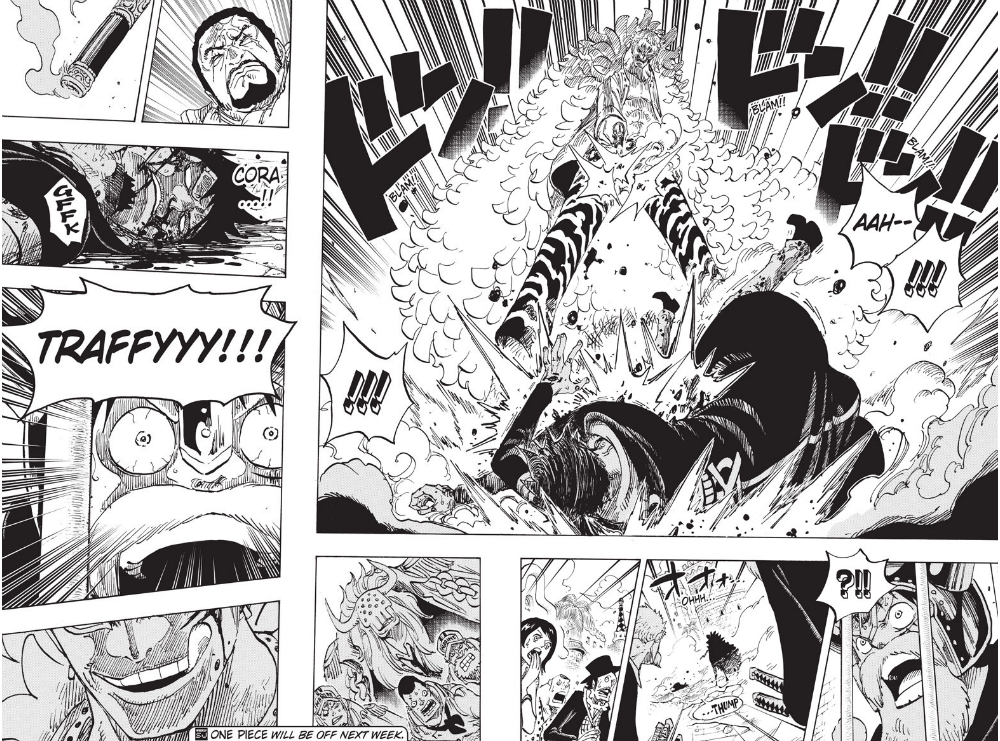 Seraph of the End Ch. 4 – 5
So not only does our main character continue to be awful, but now we discover that this series contains worse vampires than Twilight.

No, that is not a typo. This series knows less about vampires than the series that spawned the Sparklers. First of all, why does the vampire queen have the body of a twelve year old? When Mikaela was turned as an actual twelve year old and is now looking like a fifteen year old. So he aged? Vampires age? At least Twilight had the decency to stick to vampires never growing older. But this series just bends the rules whenever it’s convenient. I can’t see how anyone could possibly enjoy this series. Especially when we discover that the Demon Army is less like an actual army and more like a Tite Kubo version of an army. In other words, all the most incompetent people in charge and all letting their personal issues get in the way of actually being an army. Lovely. I look forward to reading more of this like I look forward to cutting out a hangnail.

World Trigger Ch. 38 – 40
World Trigger on the other hand has actually been quite enjoyable. Seeing Yuma bet the tar out of an arrogant twit is always enjoyable, and now we can actually appreciate it after actually getting to know him. The pacing is still terrible, but at least we’re willing the time away with interesting scenes. Which isn’t exactly what I could have said about this series after the first chapter.

Toriko Ch. 257 – 258
The past two chapters of Toriko were quite good. While they were aftermath and transitionary chapters where not too much happened actionwise, we still get a lot of good character moments sprinkled here and there. The moment between Chin Chin and Chiyo was particularly appreciated. Shounen manga aren’t known for their great portrayals of adults and their relationships, so seeing one dealt with quite well here really worked for me. Other than that, it looks like Neo is going to be moving to the Gourmet World, and after the near destruction of the human world I don’t think we can avoid it any longer. Toriko and his friends will have to step into the Gourmet world. Whether to save Komatsu or not, but certainly to go after Neo and get food for the now starving masses. 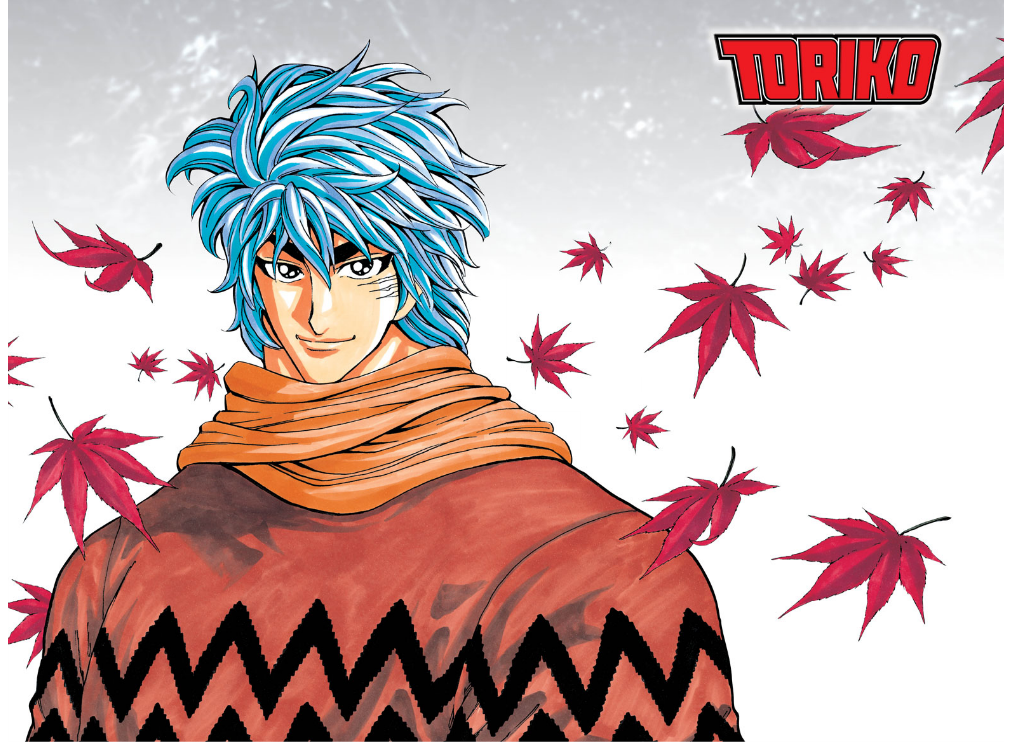 Bleach Ch. 556 – 558
Komamura’s fight against Bambietta was actually quite solid. It set a good pace, gave us proper development for the new power sets and all that. And for the most part explained what was going on properly. I’m a bit iffy about some parts that took up much more space than they should have, but for the most part I’m satisfied with the past several weeks. Which is not something I can say for other chapters. 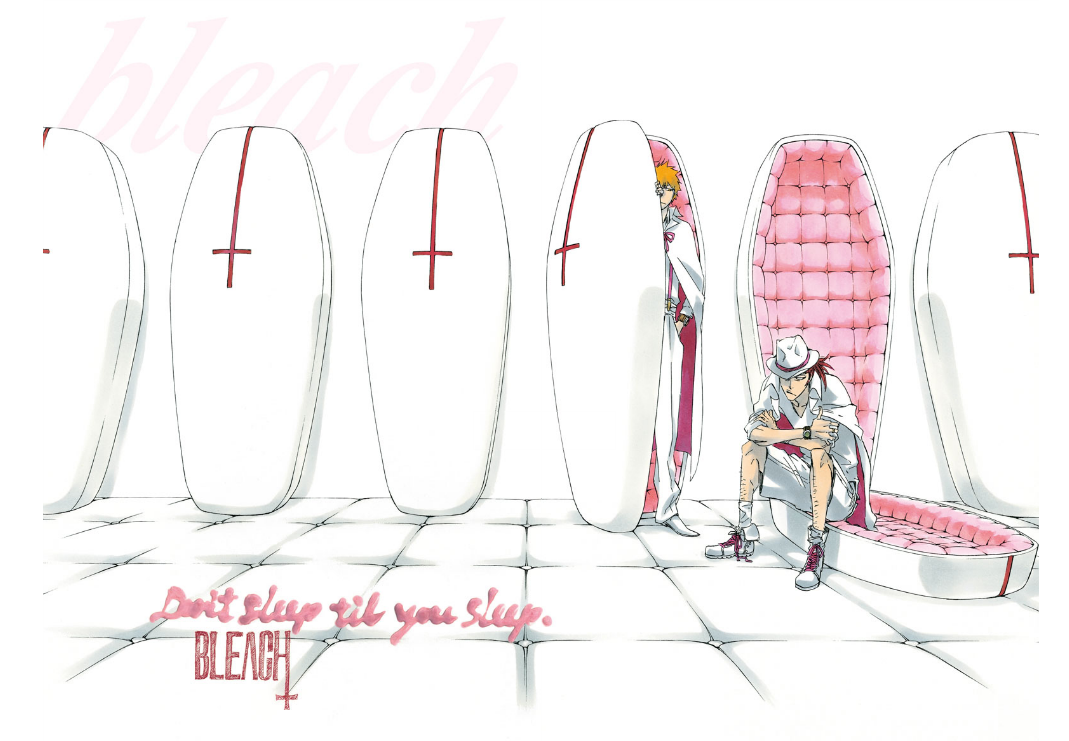 Dragonball Z Ch. 39 – 41
We’re almost through the final battle of the Saiyan arc. This is really where the new Dragonball starts to shine. We get some great moments with the characters, some great designs, and of course some great fights. Fights that are a lot more brutal than I remember from the repetitive anime. 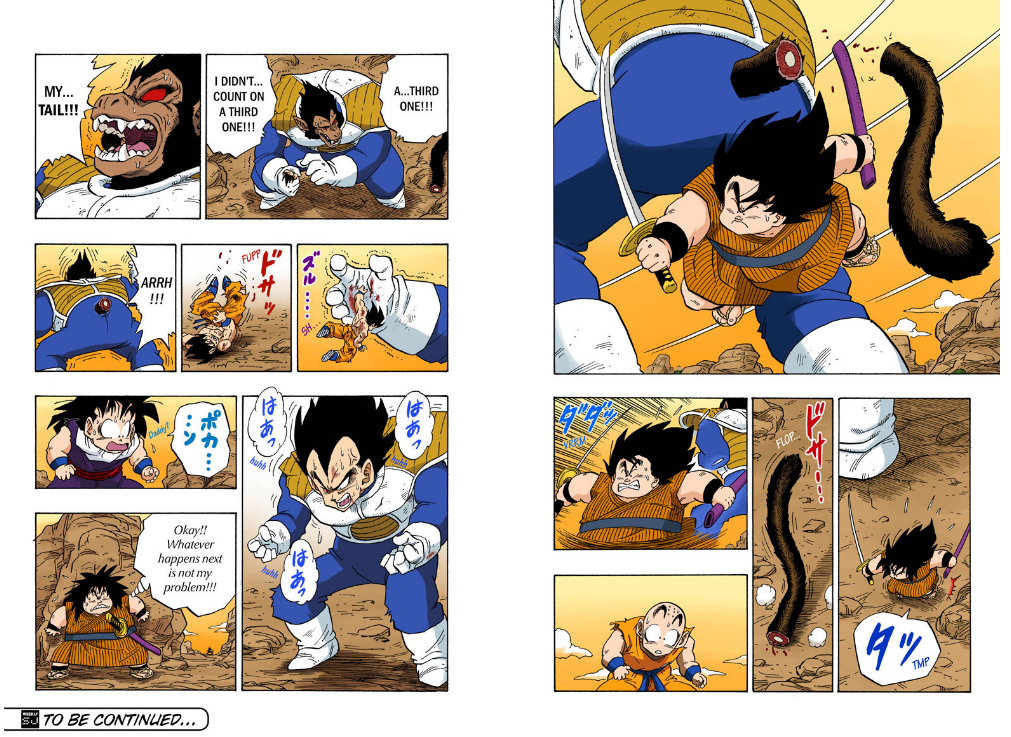 Let me know how the last three weeks of manga have been for you. Personally I’ve been checking out some of the Crunchyroll chapters, which I recommend you take a look at. If you want a break from Shonen Jump, try out some Kodansha chapters. But before you do, which series was your favorite the past three weeks?