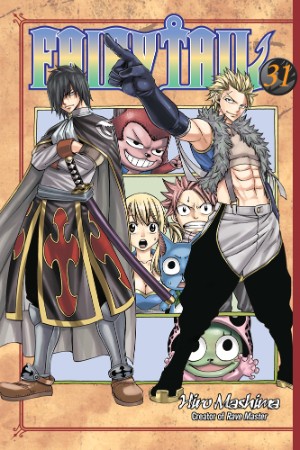 After Lucy learns of her father’s fate, she and her friends return to Fairy Tail, where they discover that their seven year absence has put a significant gap between their powers and those of every other mage in the world. To make things worse, Fairy Tail is now the lowest ranking guild in the country. So they decide to enter a tournament to show off their stuff and rise back to the top. But they only have (insert time) to make up for seven years missed time.

Ever since the timeskip, I’ve been wondering why exactly Mashima felt the need to move his story seven years into the future. Fortunately this volume provides somewhat of an answer. What it allows Mashima to do is weaken his characters down from their excessively powerful levels and give them more of a challenge. I won’t say I like the development, but it does have a reason behind it beyond Mashima deciding to change things up on a whim.

This volume we’re introduced to two new Dragon Slayers, Sting and Rogue. For the most part they’re generic bad guys without being fully evil, but there’s something about their cats, Lecter and Froesch, that I just can’t stand. They just manage to have little to no character and yet the bits of character they do have is pure annoyance. And they haven’t even done much this volume!

Fairy Tail goes through phases, usually the beginning phase of an arc is pretty good and it’s not until later that the story starts to fall apart. So for what it’s worth, the story this volume is actually a lot of fun. ANd there are plenty of jokes that actually made me laugh, including a moment where Happy breaks the mood of a dramatic sequence in a way that actually works. It’s rare to see manga authors who know how to pull that kind of humor off so I have to give credit where it’s due.

Whatever you do, if you pick up this volume do not read it in a public place, because we not only get a beach scene, but a hot springs scene as well. If you don’t want people thinking you only read manga with lots of T&A then I recommend making this an “only in my room” reading.

While there are a couple concepts brought up that never see the light of day again I have to admit that I came away from this volume a lot more positive than I’ve been about past Fairy Tail volumes. For fans of the series this is definitely an enjoyable read, while new readers won’t find all that much besides a few jokes. If this was the first Fairy Tail volume you read and you laughed more than once, then I’d certainly recommend checking out earlier volumes.