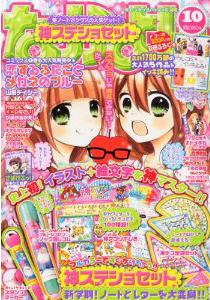 In a world of stories about and for Princesses, Nakayoshi is Queen.

Nakayoshi Magazine, published by Kodansha Publishing, is the oldest continuously-published manga magazine for girls. Begun in 1954, Nakayoshi sells 170,834 copies a month, according the the Japanese Magazine Publishers’ Association. Nakayoshi has disctictively colorful covers wrapped around 500 pages of stories that range from the most light-hearted magical girl to far more serious travails of love, life and even adventure.

In the 1990s, Nakyoshi branched out into anime. Sailor Moon, a popular series running in Nakayoshi at the time, is widely considered to be the catalyst that broke shoujo out of being a small, self-contained niche, into mainstream anime and manga awareness, both in Japan and the West. Now that Sailor Moon is on the verge of a revival for it’s 20th anniversary, the pages of Nakayoshi are once again filled with teasers, and themed goods for the series.

If you’ve been reading manga for more than a few years, I’d bet dollars to donuts that you’ve heard of, if not read, a Nakayoshi series. Sailor Moon, Card Captor Sakura, Magic Knight Rayearth and Saint Tail are all “gateway” series for folks who came to anime and manga in the 1990s. Recent popular series are Ghost Hunt by Inada Shiho,  Shugo Chara! by Peach Pit and Jigoku Shoujo and Jigoku Shoujo R (Published in English as Hell Girll) illustrated by Etou Miyuki.

Nakayoshi, like its competition in the girls’ manga market, comes packaged with “furoku;” small gifts, jewelry, accessories, stickers, etc., branded with series from the magazine, or with the Nakayoshi brand itself. The current issue, for instance, contains a paper stationary set. Nakayoshi has a website on which each series is given a page with character introductions, links to published volumes, available downloads and other typical website features. Trial chapters of current  manga is available on the website as are video trailers and promotions. Nakayoshi also has ongoing recruitment for new artists, a change from even a few years ago.

At 500 pages for 580￥ per volume, ($5.90 at time of writing,) Nakayoshi can surprise you with nearly every page. Following “DokiDoki Precure,” which as an extremely popular anime franchise in Japan, is a pretty straightforward magical girl story. “Watashi ni XXX Shinasai” is a comedy-romance, Andou Narumi returns with “Waltz no Jikan,” a love story built around that favorite of young girls everywhere…ballroom dancing. “Sabagebu~!” follows a transfer student who finds herself embroiled with the heavily armed Survival Game Club at her new school and has just been slated for 2014 anime. And even wildly popular music idols such as Vocaloids and AKB48  have a niche in Nakayoshi, as their manga runs in the pages. You really just never know what you’ll find in the pages of this Grand Old Dame of girls’ manga.