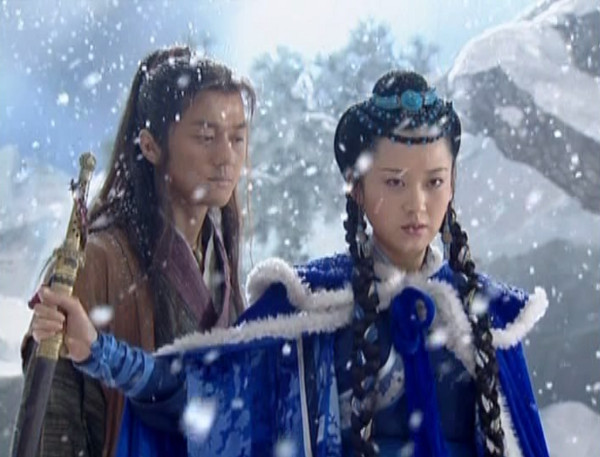 Ah, Laughing in the Wind. While I simply couldn’t resist putting this screenshot at the top, I think I should begin at the beginning.

I at first was planning to describe the opening scene fully, but then I realized that it would be easier to direct readers to Dramafever so they can watch the opening scene themselves. If you can, I suggest you watch the first eight minutes or so (up to the point where the horse-riders come in) before I share my observations. I realize not everyone can (for example, *I* cannot access this show on Dramafever, so I’m assuming that it’s the same as my DVD version), so I’ll try to provide enough description so that even those without access can follow along. 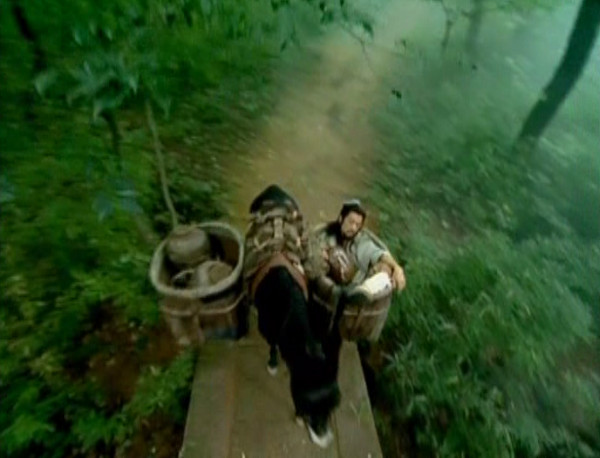 Then, we see two strangers get along very well, playing music and drinking wine. However, it turns out that these two strangers belong to different factions – factions which insist that the other is Totally Awful and Should Always Be Treated as an Enemy. The older man seems to have no problem associating with a member of the other faction, and offers his friendship in spite of the difference in faction. The younger man, however, refuses, because *his* elders forbade him from having any dealings with the Sun Moon Cult. 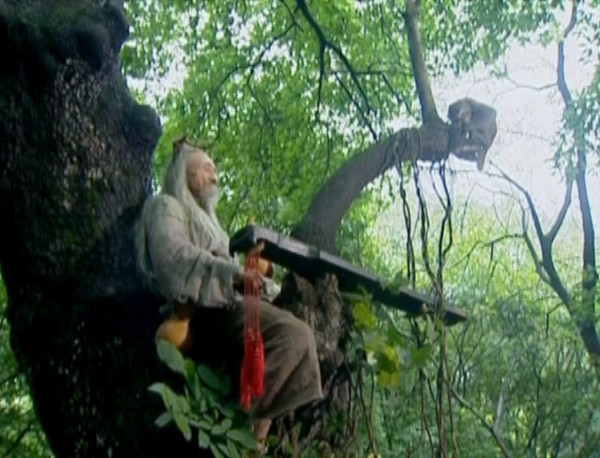 Thus, in less than ten minutes, the viewers learn what pretty much the entire TV show is about: Montagues and Capulets (with lots of music, swords, and wine, of course).

I’ve already summarized this story once as a political allegory, but I’ll summarize it again, this time time with a Romeo-and-Juliet theme.

There is a group known as the Montagues Five Mountain Sword Sects, and another group known as the Capulets Sun Moon Cult. They are bitter enemies. Romeo Linghu Chong belongs to the Huashan Sect, which is part of the alliance. He has some rather antagonistic encounters with Juliet ‘Shenggu’ (that’s Chinese for ‘holy maiden’ or ‘lady saint’), who is of course part of the Sun Moon Cult. 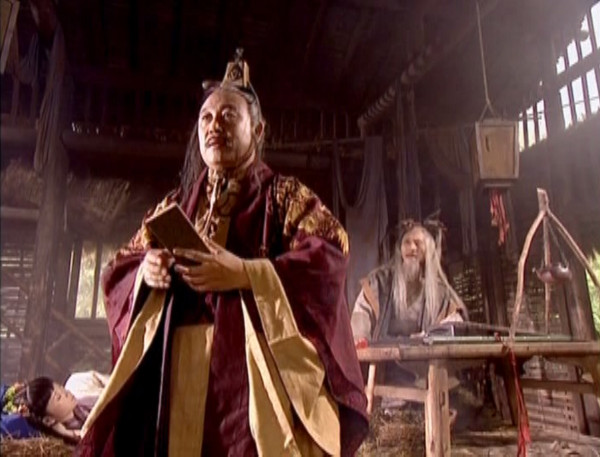 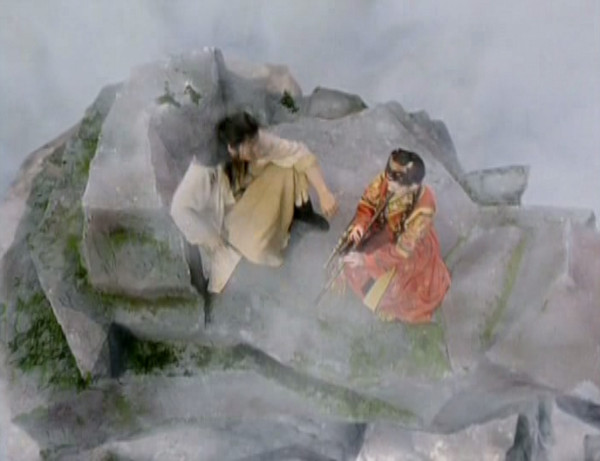 The thing is, Linghu Chong knows nothing about music, so he can hardly play the tune itself. Now, ‘Shenggu’ is a musical expert, but … that would require Linghu Chong and ‘Shenggu’ to cooperate. And if they cooperated by pooling the musical score (Linghu Chong) and musical skills (Shenggu), they might start liking each other, which would be fascinating dangerous. Look at what happened to Liu Zhengfeng and Qu Yang because of their musical collaboration. Might the tune ‘The Laughing Proud Wanderer’ cause Romeo and Juliet Linghu Chong and ‘Shenggu’ to have a similar fate?

This TV series is adapted from Jin Yong’s novel The Laughing Proud Wanderer (notice that the novel is named after the piece of music).

For many years, all of Jin Yong’s works were banned in China, and as Jin Yong’s most political novel, The Laughing Proud Wanderer was probably especially unwelcome by the Chinese Communist Party. The fact that this was the first novel they adapted is, to me, quite interesting. 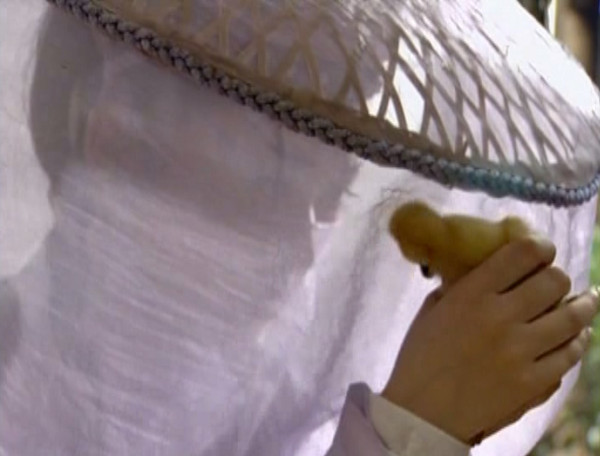 I wonder if the makers of this TV series ever felt like a chick in Shenggu’s grasp.

Just before this series was produced, Jin Yong revoked TVB’s (in Hong Kong) license to adapt his works because he strongly disliked their last couple adaptations. I’ve read that he sold the rights to Zhang Jizhong for a single yuan on condition that he produce an adaptation as good as his adaptations of Water Margin and Romance of the Three Kingdoms.

In other words, the people making this series had pressure on them. They definitely had pressure from Jin Yong, who might never allow another adaptation to be made in mainland China if they disappointed him, they had indirect pressure from Chinese censors (my understanding is that, even when Chinese censors do not directly interfere, it’s always a lingering concern), and most of all, they had to prove to fans that a mainland Chinese Jin Yong production could be good.

One thing which really stands out about this TV show is the embarrassing abundance of gorgeous landscapes. Mist-filled forests, serene waterfalls, lofty mountains, you name it. This is actually pretty common in wuxia (just as it’s common in Westerns), but I know of no other work of wuxia which excels at natural scenery as much as this series. 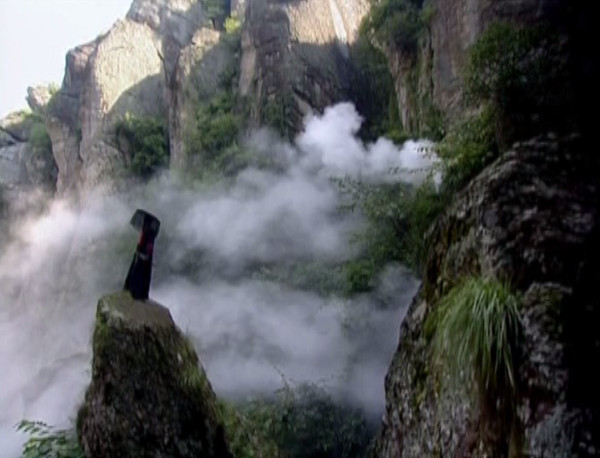 Obviously, some of the scenery is the ‘Wu Yue’ (Five Great Mountains), which according to this article are ecologically in better shape than equivalent non-sacred areas in China. 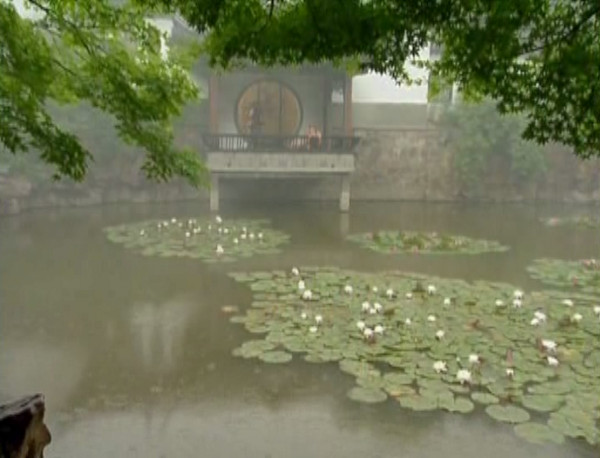 You gotta have a lotus pond.

I also get the feeling that most of this TV show was filmed in southern China – which would make sense since part of the story is set in southern China. The main reason I get this feeling is that much of the scenery looks similar to Taiwan, which (at lower elevations) is ecologically similar to south-eastern China. 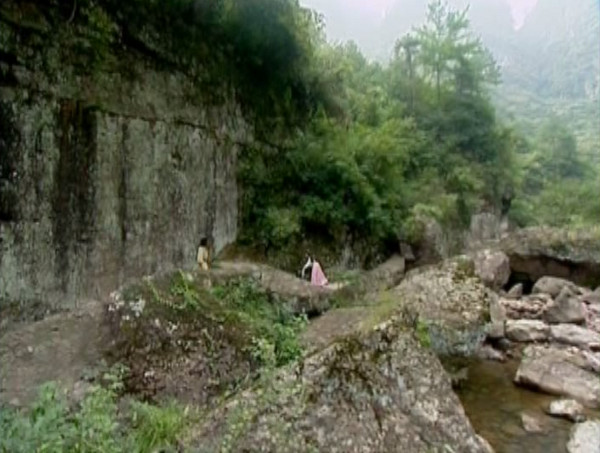 After moving to Taiwan, I’ve become an outdoor enthusiast – I generally try to go out to Taiwan’s forests/grasslands/waterfalls etc. whenever feasible. And I’ve developed a personal attachment to Taiwan’s environment. Much of the landscape in this TV show feels really familiar to me – particular the landscapes which looks like subtropical forests on top of sandstone. That the characters live in a place which looks very much like where I like to hang out in my free time gives me an odd yet warm feeling. 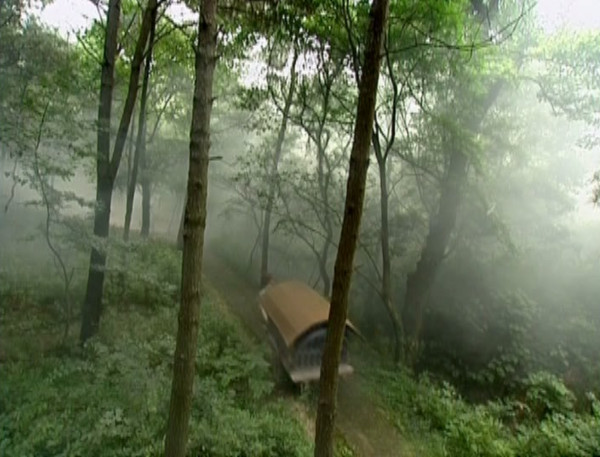 This does not look so much like Taiwan (though maybe one could find something like this in Taiwan at the right elevation).

Since this is an adaptation, some people want to ask ‘is this faithful to the original novel?’

My short answer is ‘no’.

That said, I still consider it an adaptation, rather than fanfiction. Most of the overall plot and characters come through. However, there are a lot of changes, most of them small, but they add up.

Two broad changes stand out to me:

– The ‘Romeo-and-Juliet’ Slant. My summary above might have thrown off people familiar with the original novel. Trust me, it reflects the TV show.
– Courtesy. The characters show much more tact in this TV show than in the original novel. I actually didn’t realize just how rude the characters are until I saw their rudest behavior stripped away. No caves full of blind men insulting their enemies’ grandmothers in this adaptation. While I think the outrageous comments are the most memorable dialogue from the novel, the story actually stick works very well without the rudeness. Plus, one side-effect of the characters’ cleaning their mouths is that this TV show is significantly less trans-phobic than the original. 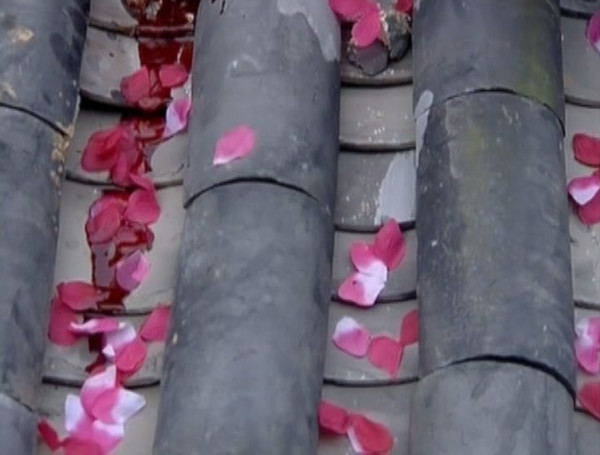 Blood mixes with flower petals as the lovers die (I’m not saying *which* lovers die, so this is not a spoiler)

I don’t mind most of the changes. If I want something exactly like the original novel, I should just go re-read the original novel (and let me tell you, some parts of the novel are so flawed that even the most faithful adaptations alter them). I demand quality, not faithfulness to the source.

Ren Yingying (aka ‘Shenggu’) has a much bigger presence in this show than in the novel. She appears in the very first episode, and appears in most episodes after that. By contrast, she doesn’t appear at all in the first half of the novel. 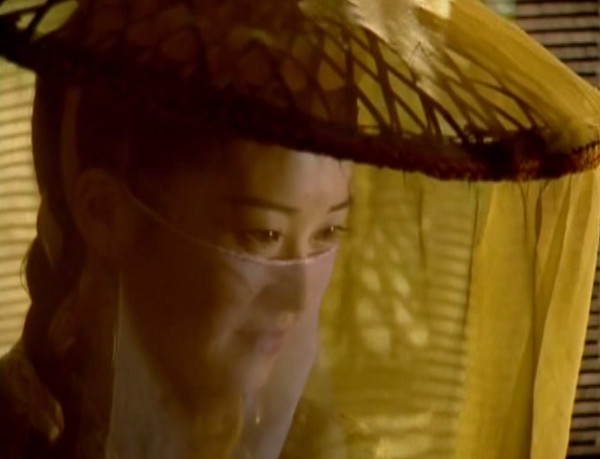 I had felt that the Linghu Chong / Ren Yingying romance was not as powerful as that of some of Jin Yong’s other romantic couples simply because they do not spend enough time together. This TV show definitely takes care of this, and I felt the rapport between them much stronger here than in the novel. Besides, some of the ‘new’ scenes between them are just plain fun (which, for me, compensates for the omission of Ren Yingying’s tartest comments in the novel).

However, it’s not just the romance which benefits from Yingying’s increased screentime – it’s her entire character development. 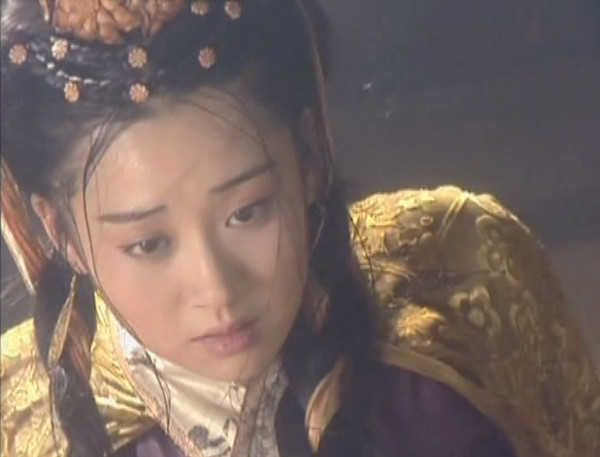 In the novel, Yingying doesn’t seem to grow very much. I know that, technically, she does change in the novel, but she doesn’t show up enough for me to really feel it as a reader. But here, in this TV show, her growth as a character is much, much, much more apparent. And I think a character as interesting as here deserves a bit more spotlight.

There is More to Come…

I am not done talking about this TV show, but I think this is a good place to pause. In the mean time, if I have piqued your interest and you have Dramafever access, you can watch it and form your own opinions.

One can learn quite a bit about somebody just from their book collection. Sara K. has a set of books about the wildflowers of Taiwan, as well as three books about hiking in northern Taiwan, two travel books about other parts of Taiwan, and some hiking maps of Taiwan. Just like China, Taiwan has its own ‘Wu Yue’ – Yushan, Syueshan, Xiuguluanshan, Nanhudashan, and Beidawushan, which, though less famous, are actually much higher than China’s Wu Yue.