ANNA: Flower Boy Next Door has a bit of a quirky premise for a k-drama. Go Dok-Mi (Park Shin-hye) has a severe case of agoraphobia, doing her editing work from her home, and almost never venturing outside. Her main outlet is spying on her handsome neighbor in the next building. Go Dok-Mi finds herself taken out of her familiar surroundings when she encounters Enrique Geum (Yoon Shi-yoon), a famous video game designer who spots her spying on his brother. Go Dok-Mi’s neighbor webtoon artist Oh Jin-Rak (Kim Ji-hoon) silently watches over her, and attempts to make sure her emotional equilibrium as a shut-in isn’t disturbed. Rounding out the cast are Cha Do-Hwi who is Go Dok-mi’s friend turned enemy from high school and Oh Dong-Hoon the assistant webtoon artist.

Flower Boy Next Door is available for streaming on Dramafever.

What did you think of this drama? 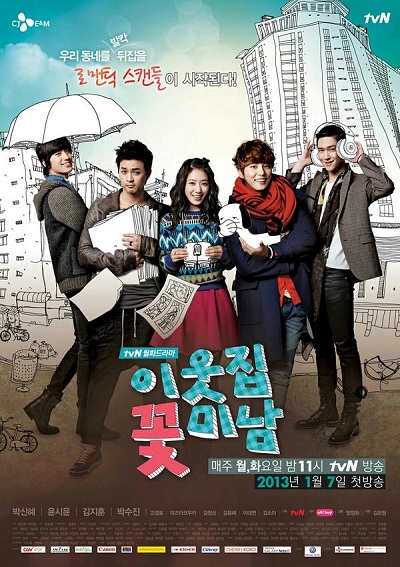 EMILY: I’ve really enjoyed this show. It has a very different look and feel to it than many other dramas I’ve seen. There is sort of a low key indie vibe to the production. I guess I’m used to seeing shows where there are chaebol/CEO type guys driving around in luxury cars and everyone has perfect hair and nice clothes (even the characters who are supposed to be poor). In this case, the drama feels a little more gritty. While many k-drama heroines face extreme hardship or past trauma, for the most part, they remain plucky and cute. Here we have a heroine who is actually damaged. She experienced past trauma, and it actually had an effect on her personality and how she lives. She didn’t just ‘try her best’ and keep cheerfully forging on; she shut herself in and hid from the world. Therefore, her character feels more realistic to me than other heroines. Her hair isn’t always perfect (or artfully disheveled) and she wears messy clothing. Her apartment is cluttered. 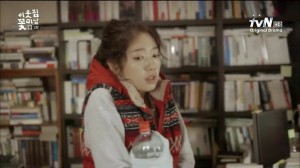 As for the guys, while their occupations are a bit less realistic, at least they aren’t living like perfect rich guys either. Mr. Webtoon artist has a whole pile of issues of his own, and Enrique also has a failed romance. I really enjoyed watching these three interact and change after meeting each other.

MICHELLE: I love this drama with every fiber of my being. I love that it doesn’t follow the usual Guy #1 (he’s kind of a jerk but you know he’ll ultimately get the girl) and Guy #2 (he’s super nice and therefore you know he’s got no chance) formula. True, Enrique is rich, but he’s also goofy and has uncanny insight into Go Dok-Mi’s true thoughts. He challenges her, and she needs this. Jin-Rak is nice and handsome (and played by someone who’s been Guy #1 in the past) and considerate to Dok-Mi’s plight, but he puts her on a pedestal and indulges her eccentricities in a way that isn’t helping her.

I haven’t finished the series yet, but this is one love triangle that I don’t find predictable in the slightest. It’s so well-done, with more subtlety and depth than the other dramas I have seen (which admittedly is a very small sliver of the population).

ANNA: I liked the series very much but I had a more measured reaction. I thought that the innovative cinematography and storytelling were a bit front-loaded onto the earlier episodes, but I did enjoy the more realistic and gritty vibe of the show. I was genuinely uncertain for a little bit who the heroine would end up with! One storytelling element that I liked a lot was how transparent Cha Do-Hwi’s manipulations were and how quickly the men saw through some of them. Usually no one but another woman would detect the evil strategies of the female antagonist. It was pretty hilarious that after Cha Do-Hwi engineered a broken heel in proximity to Oh Jin-rak in order to have an excuse to summon his assistance, the webtoon assistant Oh Doog-Hoon immediately comments that it was interesting that all her clothes were from the current season, but her broken shoe was so last year in style.

I was also a big fan of the cranky, sleep-deprived webtoon editor. 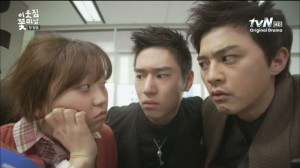 EVA: As usual, I went the other way. I was really turned off by the series at first (slow, plodding character, same things happening over and over, the obviousness of Cha Do-Hwi), but as I’ve gone on (I’m currently on episode 10), I’ve grown to like the characters, I care more about their issues, and I’m loving the non-K-Dramaness (that indie vibe Emily talked about). I LOVE that no one here is living in an inappropriately posh apartment or on somebody’s roof. I LOVE that Oh Jin-Rak’s webtoon editor is an overworked, exhausted crackpot. I LOVE that none of the romances are proceeding smoothly towards a finish line. And I especially love that (with the exception of Cha Do-Hwi, of course) people who say they care actually do care and try to help. It’s refreshing and lovely and I wish more tv shows (American included) were like this.

ANNA: I thought that the reliance on Enrique’s crazy fans as a plot element bogged down the middle part of the series a little bit. Also, I thought that Enrique was cute, but the romance between Go Dok-Mi and Enrique was a bit like showing what would happen if a woman fell in love with cute teddy bear. I much preferred Oh Jin-Rak, but perhaps I just find cranky men attractive. 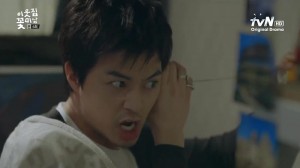 Keeping tabs on his neighbor.

MICHELLE: Jin-Rak is, by far, the studlier of the two, but I think Enrique is healthier for her. But, that said, he could probably have as good of an influence if he were just to remain her friend. Jin-Rak seems willing to be friends, but it’s more from a place of “it will stress her out if I confess” than any real feeling of contentment with that role in her life.

NANCY: I would watch this drama just for the stressed-out webtoon editor. She was by far my favorite. I liked how this series started out, and the characters were well developed, but I did have issues as the series went on. At first this drama shows a very personal view of a woman’s struggle to rejoin society, and then towards the end we are merely watching from the outside, wondering what her motivations are. They shut us out from the shut-in!! Plus there are many gimmicks used in the last (and first) few minutes of each episode to create false cliffhangers. They have nothing to do with the main plot and actually lessen the integrity of the characters in some cases. I’m also going to show my support for Enrique–this drama would have been unbearable without him. 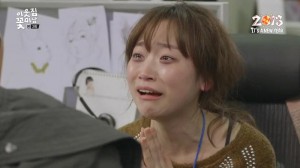 EVA: Stressed-out webtoon editor is the character I’d be if I were in this series. Her bits of comic relief are some of the best laughs I’ve gotten from this show.

I’ve made it through episode twelve and, yay for man-tears and dry kisses! But, yeah. I hear what you’re saying, Nancy. Go Dok-Mi’s internal monologue and/or the narration of her journal writing gives us an entry point to how she feels about her life as a shut-in, how her expectations have contracted, and how willing to compromise her own desires she is if it means she doesn’t have to confront the world. I’ve enjoyed having that window during the last few episodes I’ve seen.

Also, for the first time in this series, I missed the ubiquitous bitch slap/coffee toss. I wanted more drama during the confrontations between Go Dok-Mi and Cha Do-Hwi. Instead we got silent tears, some fainting, and an unsatisfactory blame toss. These two have history and I wanted to see what happened. But nothing happened! Bah. I’ll keep watching, if only because I hope to see more of a closure to this relationship than we’ve been given so far.

ANNA: I liked the way stressed-out webtoon editor managed to be both hilarious and poignant at the same time. She ends up in a very nice place at the end of the drama, which was nice to see.

MICHELLE: Speaking of hilarity, there were quite a few bits on Flower Boy Next Door that made me laugh out loud, and I’m not the easiest person to make laugh. There’s that absurd moment in which Enrique catches Dok-Mi spying on his brother’s apartment… whilst clad in some weird furry panda hat/cape thing. Or the scene where a drunken Jin-Rak—who I am still used to as the humorless lawyer from Stars Falling from the Sky—decides to go to sleep amidst the building’s recyclables, at which point Dong-Hoon thoughtfully covers him with a stray piece of cardboard. I guess when I describe them, these don’t seem like the most clever jokes ever, but they certainly appealed to my sense of humor. 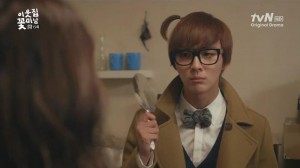 Enrique busts out his Detective Conan cosplay. As one does.

ANNA: I also loved the bit where the men were all pretending to be Spanish-speaking Italian mafia in order to punk Jin-Rak’s estranged family.

So, check out Flower Boy Next Door if you are interested in a k-drama with a slightly different sensibility than you might be used to. The combination of a gritty setting, camera techniques that evoke indie films, and some engaging characters in unusual situations make this a drama that is well worth watching.