Well, since everyone’s talking about Tamura Yumi and I just recently finished reading the newest volume of 7 Seeds, I think I will talk today about how some US company really, really, REALLY needs to license this awesome manga! 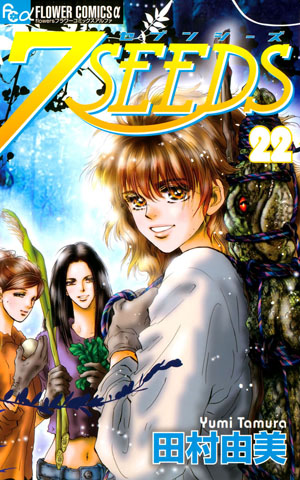 I’m sure many of you have read Basara, so you know Tamura Yumi can write amazing long-form post-apocalyptic adventure series. The cool thing about 7 Seeds is that it is also a long-form post-apocalyptic adventure series, but at the same time is completely different from Basara. Basara is set sometime long after humanity has recovered from their apocalypse and has regressed to a sort of feudal society. The actual apocalypse and aftermath don’t play any role in the story and to be honest, it could be set in a fantasy feudal Japan and not really feel any different.

7 Seeds, on the other hand, tells the story of five groups of young people who were cryogenically frozen in a government plan to assure humanity’s survival after Earth’s collision with a giant meteor. It’s a survival story and the apocalypse and the affect it had on Japan is constantly felt. There’s also lots of intrigue as we learn more about the 7 Seeds Project and what happened to everyone else on Earth after the meteor hit.

The manga starts off with Natsu’s POV, as she wakes up in an unfamiliar world with a bunch of strangers. No one told her or the other people in her group that they were chosen to be part of this project. The only person who knows anything is their guide, Botan. Later the POV switches to Hana, a girl on a different team, who also had no knowledge of the project, but is far more prepared than anyone else, having had a lot of wilderness training from her father. Occasionally the POV switches to other characters (like when we meet Aramaki, the sole survivor of his group, who thawed out fifteen years earlier than Hana and Natsu’s groups, in the icy wilderness of Hokkaido, or when Hana finds the journal of Mark, a guy who lived in a doomed shelter directly after the meteor hit, or when we meet the team whose members trained their entire life in order to be sent to the future as humanity’s great hope but who ended up being emotionally and mentally scarred by the experience), but for the most part it’s shared between Hana and Natsu.

This series has so many angles of appeal. Do you like adventure? Do you like post-apocalyptic stories? Do you like large casts with lots of great female characters? Do you like found/chosen family? Do you like intrigue and mystery? There is romance, too, as these are (for the most part) teenagers with lots of emotions and hormones and all that jazz. But romance plays even less of a role than it does in Basara, so if that was your main interest in a story then this probably wouldn’t be the story for you (but then again, it might, since there are loads of people to ship and at least one pairing that’s set up as the “main romance”). (I do love shoujo romance, but I’m also always really happy to find good shoujo series that aren’t primarily romance, because while there’s more of them in Japan than available in English, even in Japan it’s still a minority compared to romance-focused manga.)

One thing that really hit me in reading the most recent volume is that the theme of 7 Seeds seems to be “don’t look back.” No one knows how long it’s been since the meteor hit. Even the guides, who were prepared for this, know only that they were set to thaw when the computers sensed that the world was once again able to sustain human life. The flora and fauna and even the landscape of Japan, everything is alien. But the lesson seems to be that it’s humans who are the intruders, and in order to survive, they have to adapt to this new world, rather than clinging to the past. This is really driven home every time they encounter one of the abandoned shelters where those few survivors who weren’t part of the 7 Seeds project lived after the meteor hit.

I know some people don’t like her art and feel it’s dated (personally I think it’s unique and helps it stand out from the crowd), but she’s such a great storyteller that even if it had the worst art ever, I would still recommend this series to everyone because it’s that great. I don’t want it to end, so when it seemed like the groups were getting closer to finally all coming together (which will surely be the beginning of the end) in this most recent volume, I found myself cheering when they were separated even further as that meant the series wasn’t as close to the end as I’d feared. (There’s still so much to discover! So much I want to know!)

The longer this series goes on without being licensed (the most recent volume was #24 and it’s been running for over ten years now), the more I worry it never will be, since publishers are always more hesitant about picking up a long series (especially when it’s not shounen), but I really, really hope that someone will take a chance on it. As much as I loved Basara, I love this many times more and I want more people to be able to enjoy it!