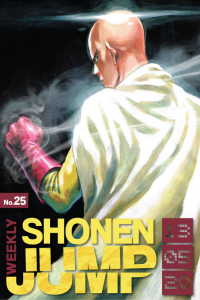 It’s actually been a while since the last time we had just a regular issue of Weekly Shonen Jump. As far as I can remember the past few weeks have included a few monthly series here and there. So I almost don’t know what to do with myself, finding that I’m back to basics this week. It’s also the first week where I find myself unsure what to think of certain chapters that I usually really like. I’ll try to do my best, but I can’t make any promises about the coherence of my thoughts, considering the current change in my work schedule.

One-Punch Man Ch. 017
Well then, if One-Punch Man is anything, it’s most certainly experimental. This was basically thirty two page spreads, thirty pages of a magazine, devoted to the most pure representation of what a fight in shounen manga should be like. No talking, just pure action, punching, kicking, laser…ing… It’s a cinematic approach that most creators don’t take because their page count is limited. But being a monthly series One-Punch Man manages to pull this off. Were I still writing my Combat Commentary column this would be a definite candidate for analysis. Still, it does run the risk of readers just skimming over it, which I recommend against, because you can’t get the full impact unless you take the time to examine each page. Protip: Don’t read it on an iphone, or any phone. Read it on a tablet or a computer. You’ll get the full effect that way. 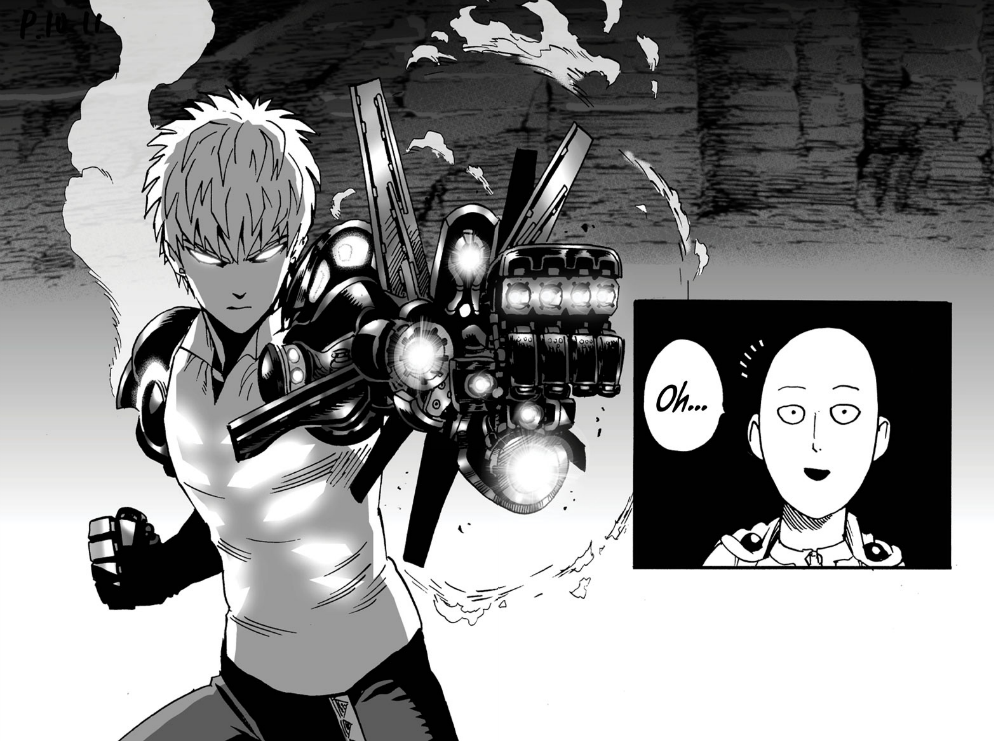 One Piece Ch. 709
I think most everyone was at least suspecting that B block would come out the way it did. I know I for one didn’t definitively call it, but it it was one of the possibilities I thought would happen. Though, I was impressed by Elizabello’s punch. I know we were told it was powerful, but somehow just having a really big punch that could only be used once an hour didn’t seem that impressive. And yet, here we are, with him taking out all the heavy hitters of the round except one. Though it did prove the main flaw of his attack—that if someone was prepared for it and knew what was coming, or could otherwise block it, the attack loses some of its effectiveness. Now it remains to see if we get a backstory for the island, or if we move on to the next set of fights next chapter. 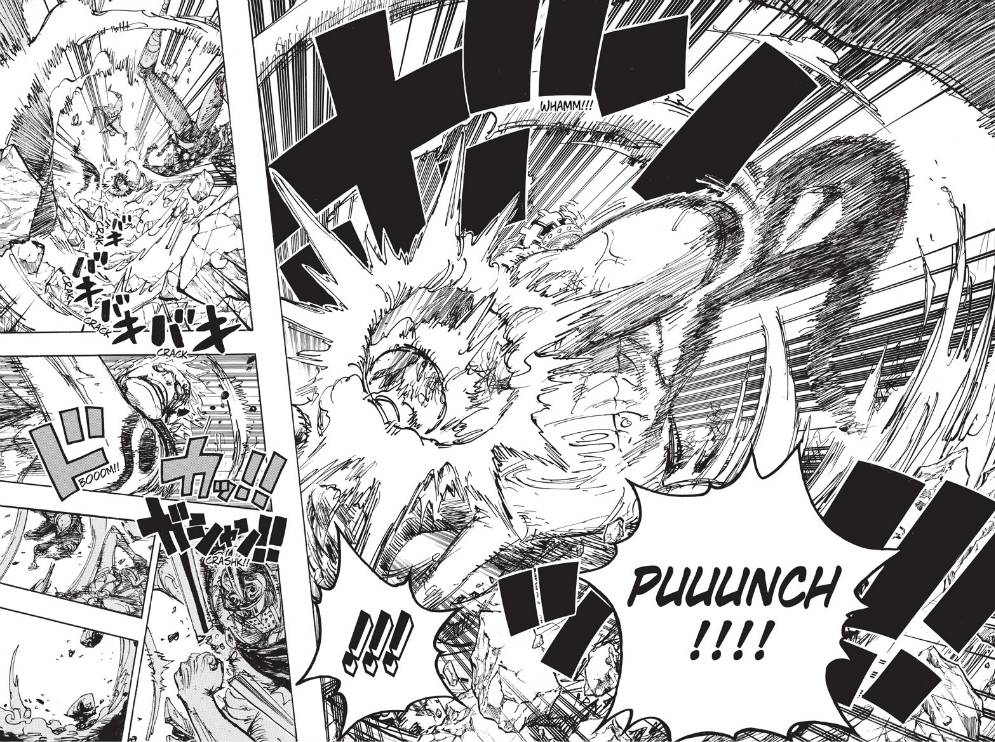 Naruto Ch. 630
Will someone please shut Obito up? He’s been saying the same thing for the past three months. It’s like Kishimoto doesn’t think we have the mental faculty to understand what Obito is saying unless it’s constantly repeated over and over. Then again, and I can’t speak for the rest of you, but I’m still reading this series, so I dunno if Kishimoto would be that far off in his estimation of my intelligence.

Though, it was good to finally get a response to the repetitive rhetoric Obito has been sprouting. Especially after he went completely coo-coo bananas with these past few chapters.

The rest of the chapter was inoffensive. And I’ll even go so far as to say that I quite enjoyed Minato’s appearance at the end. Even though I knew he was coming. Though why is Naruto not surprised that his dead father suddenly appeared? Is this series going to treat death the way Dragon Ball Z did?

It was also nice to see Sakura actually contribute. Remember her? She was the female lead at one point, before she was abandoned way at the beginning of this interminably long arc. I know more chapters means more money and all that. But there’s something to be said for quitting while being ahead. Instead Naruto is going to be remembered as a good series that went quite bad for a while, became tolerable, and then became absolutely awful at the end.

World Trigger Ch. 014
Seeing as how my time has become a lot more precious to me, I can’t say I have much to say about this week’s chapter. If nothing else the fight was interesting enough. But I can’t help but wonder why we’re supposed to believe a government agency would give sniper rifles to two kids not even eighteen yet. I know it’s a trope to have kids fighting the monsters in manga and anime. But in series like Evangelion we’re given a reason why it has to be kids. It’s not exactly a good reason, but it’s a reason. World Trigger expects us to just accept that a government agency is having teenagers fight with deadly weaponry for no other reason than that’s how it’s done in manga. I’m sorry, but I refuse to accept that. Give me a good reason. Are adults incapable of producing Trion? Can they not use the triggers? I need a reason. Any reason. Even a stupid reason would be marginally better than expecting me to just sit back and accept that a bunch of kids are the most effective fighting force around.

Bleach Ch. 537
While this chapter did retcon Masaki’s death, it at least makes sense in the context of what the flashback has established. We needed to understand how she could die against an easy opponent like Grand Fisher, considering she had her own powers that could take on hollow hybrids. And if we consider that she was sensitive enough to know the kid Ichigo was going to save was a hollow, then we could perhaps assume she had some kind of power. Still, it’s clear that the purpose of it all was to make Ywatch the ultimate bad guy. And yes, in that case it’s rather clumsy. But at least in the context of the flashback it holds together. Motivations of the author aside.

Cross Manage Ch. 033
This week’s chapter was a bit weaker than the last two, but mostly just because there was a lot less focus on the action. The character interactions, and general character moments, were really strong. Ryu also just happened to give me my favorite moment of the entire issue. I have high hopes that Cross Manage will continue to do well, and increase in the rankings so we can continue to see what Kaito can do. 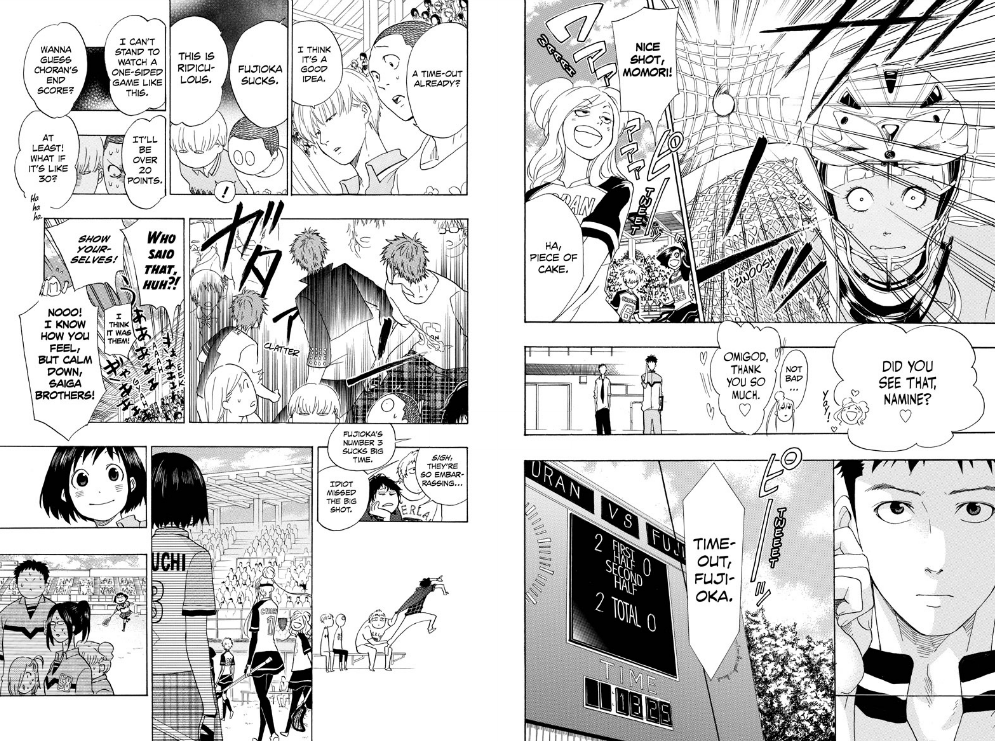 Nisekoi Ch. 074
I’ve found that the biggest problem I have with Nisekoi is that after Chitoge fell in love with Rakku she lost what made her unique from the other girls. She’s no longer the one that doesn’t like him, she’s just like the rest of them. And as strong as the rest are, Chitoge doesn’t have much else to back up her personality. In the long run she’s just less interesting than the other girls. I think it would have served the overall manga much better to put the inevitable moment where she falls for Rakku for much later, because the overall dynamics just don’t work as they are. She’s still enjoyable enough, and this chapter was a lot of fun, but I’ve found that I tend to enjoy her moments less. Which goes to show when I compare this chapter to recent ones. And that’s a big shame considering she’s the main romantic interest. If we don’t like her over the other girls, as well handled as the romance is, it just won’t be that satisfying when she and Rakku get together. And since that’s the whole point of the story it’s a big weakness that needs addressing. 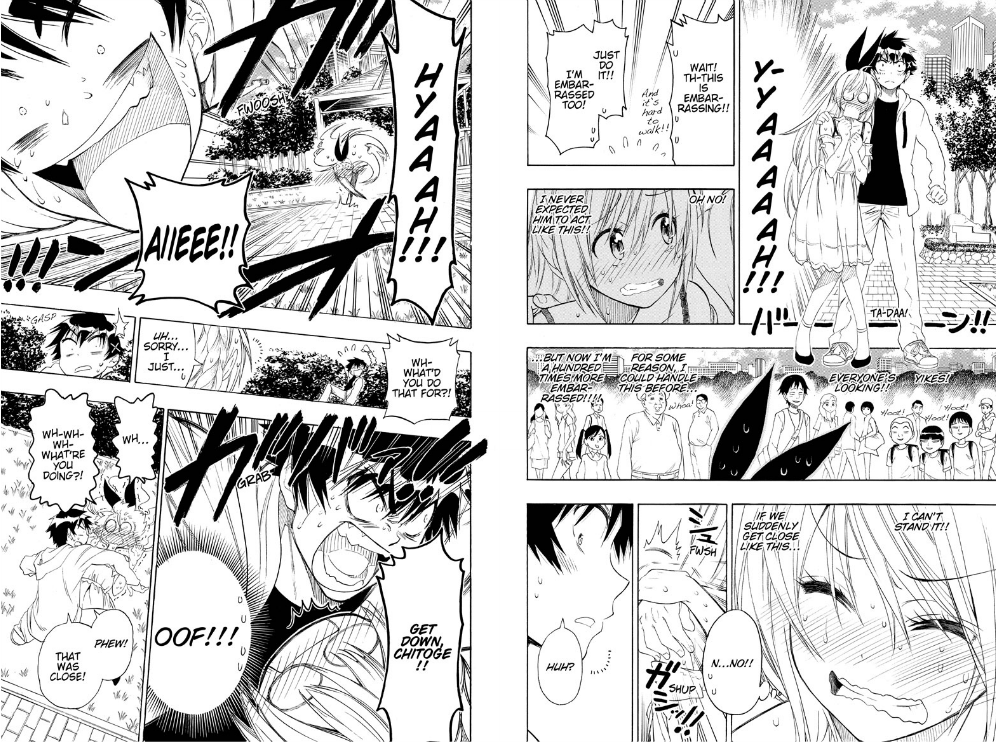 Toriko Ch. 233
This wasn’t the best Toriko chapter ever. The biggest weakness is of course how much time was spent on flashbacks, and the fact that the big reveal last chapter, that Toriko was beaten, is irrelevant. It was just meant to be a shocking moment, and now we move on to the real fight. It’s weak, transparent writing, and as much as I love this series I have to call it on this one. Emotional moments don’t work if they’re obviously being written to be emotional. Still, we can’t expect every chapter to be a winner, so I’ll give it a few more before I start really laying into it. I think Toriko deserves the benefit of the doubt.

Dragon Ball Z Ch. 015
Chi Chi may be one of the least liked characters of this series, but I really can’t help but feel sorry for her. Not only is her child kidnapped, but her husband has been murdered by the monster that almost murdered him before she and Goku got married. I’m amazed she isn’t traumatized by the events of the series. And of course, we get the beginning of Goku actually being a pretty terrible husband and father. Never mind that he’s leaving his wife and child behind to train, I know, I know, it’s to save the earth and all, but later on he does this exact same thing for no good reason. Still, this chapter focuses more on just blanket exposition and reminding us that Goku still has made any progression yet. But, it’s a good chapter, enough variety to make it more entertaining than some of the past few chapters have been.

And there you have it. I apologize again for this column being late, hopefully things at work slow down so I can actually get this taken care of in a timely manner. Anyone have any suggestions for blogging and working a fulltime job? Leave them in the comments, I need all the help I can get.

If you want to hear more, check out the Manga^3 Podcast Archives. Or go directly to last week’s episode, Episode 047 – May 13, 2013 – Gender Roles in Manga | Wandering Son. PS: We had Ed Sizemore on as a guest last week, he’s a lot smarter than us so last week’s episode is actually really good.