Ever since I started this column, I’ve hoped to eventually feature a Taiwanese puppet show. Well, the time has come. 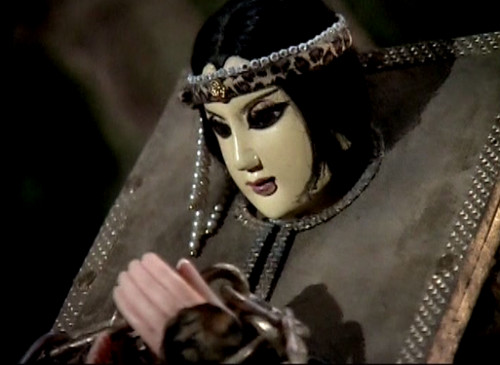 Khóohái Lúsînliông is a Tartar princess who has become a travelling sword fighter. She prefers drinking alcohol and kicking butt to acting like a princess. Various characters have trouble whether to treat Khóohái Lúsînliông as a friend or enemy. 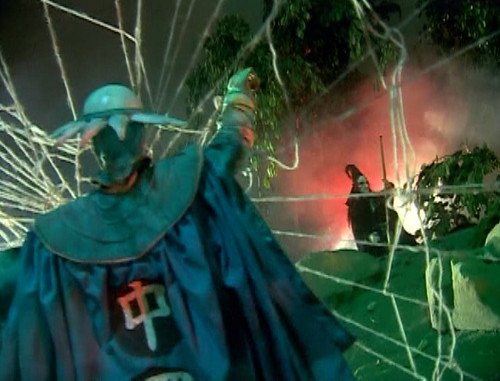 Tiònghuakióng is caught in a spider web!

Anyway, the plot keeps going on an on like this. Every episode ends with a cliffhanger, usually either along the lines of “character X and Y are about to fight, who will win?” or “What is the true identity and motive of Character Z?”

I’ll be honest, and admit that I had trouble following the plot. This is not necessarily the drama’s fault. I must point out that

1) This is in Taiwanese, and my Taiwanese comprehension skills suck.
2) I am not terribly familiar with The Scholar Swordsman, so I seem to be missing out on some background.

Glove puppetry has been extremely popular for as long as Chinese speakers have lived in Taiwan. Live puppetry used to be the most popular way to entertain masses of people.

Then something called “television” appeared in Taiwan. 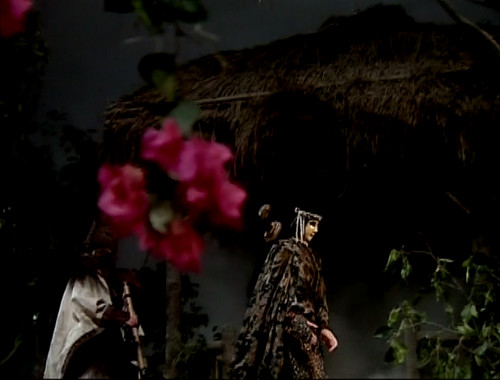 Is that television coming to Taiwan? No, it’s just Khóohái Lúsînliông going somewhere.

Did the puppeteers say “Oh no, television is going to take away all of our audience, we must stop it!!!!”?

Nope. They said “What a great way to reach more people.”

And that’s how the “Golden Light” puppetry style was born.

“Golden Light” first appeared around the 1950s, and is a style which has been adapted to work well both live and on the small screen, with a heavy focus on exciting special effects to dazzle viewers.

Throughout the 1960s, not only were many of the most popular Taiwanese TV shows puppet dramas, many of the top selling music albums were soundtracks from puppet dramas. Live puppet shows also did well.

When I talk to middle-aged Taiwanese people, if I mention puppet shows, their eyes will light up with nostalgia. 40-year-old men will become 10-year-old boys. It’s like talking about popular old Saturday-morning cartoons with Americans.

However, puppet dramas have gradually fallen out of the mainstream, and are now considered something primarily for fans. While puppet dramas used to be broadcast over the air, now they are almost only present on cable (that said, there is an ENTIRE CABLE CHANNEL dedicated just to puppet dramas). When I ask people why puppet dramas aren’t as popular as they used to be, I am told that there is too much media from Hollywood, Japan, Hong Kong, etc., crowding out the puppet dramas. 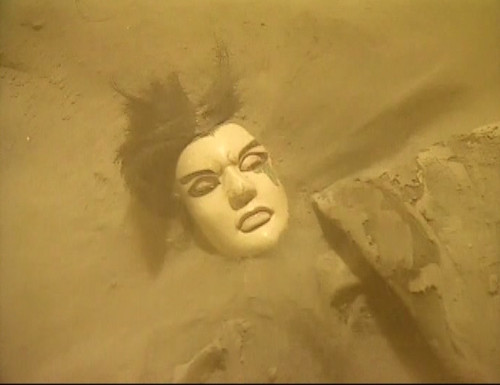 Even so, there is a very active puppet fandom in Taiwan. They have conventions. The puppets themselves can become collectors’ items which demand high prices. It is not unusual to see a 7-11 advertisement featuring puppets.

Many traditional events, such as temple festivals, often feature live puppet performances. I remembering seeing one just two blocks away from my apartment. However, while some people look on curiously for a minute or two, I have never seen anybody enraptured by a live puppet performance. It seems to be there as a ritual, not as a form of entertainment.

The Scholar Swordsman is the magnum opus of one of Taiwan’s most celebrated “Golden Light” puppeteers, Toshio Huang, who belongs to the third generation of a noted puppeteering family. The saga has been produced multiple times for TV, and has also been performed many times live. This specific spinoff seems to be a collaboration between Toshio Huang and his son, Huang Liwang.

The themesong, of course is “Khóohái Lúsînliông.” The song had originally been popularized by The Scholar Swordsman, and become a standard of Taiwanese music. I had actually been familiar with the song before I found out that it came from a puppet drama. The Youtube video above features the song.

One of the things that’s frustrating about writing this post is that stills taken from the show *completely miss the point*.

Though the puppets can move their eyes and mouths, the expressions on their face generally don’t change very much. Therefore, much of the expressive power of the puppets come from how they move. You really do have to see them in action to see just how skilled the puppeteers are in conveying personality, mood, feeling, etc., just by how the puppets move. Still images of the puppets look almost lifeless, whereas the puppets in motion feel like living people.

The show integrates both “real footage” and “puppet footage.” For example, sometimes they use shots of real deserts, forests, etc … and sometimes they have miniature puppet forests, deserts, etc. 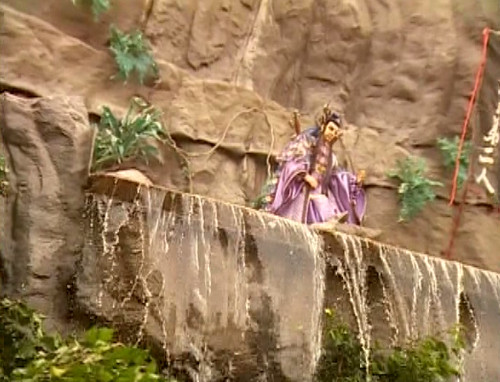 And I never imagined that puppet fighting could be so exciting to watch. The fights are really well done – detailed, easy to follow the flow of the action, variety, etc. And there are a lot of things you can do with puppets which cannot be done (ethically) with live performers. Cutting off their heads, for example. Also setting them on fire.

Obviously, this show is heavily influenced by wuxia, in fact, it *is* wuxia. But it’s not just based on wuxia. 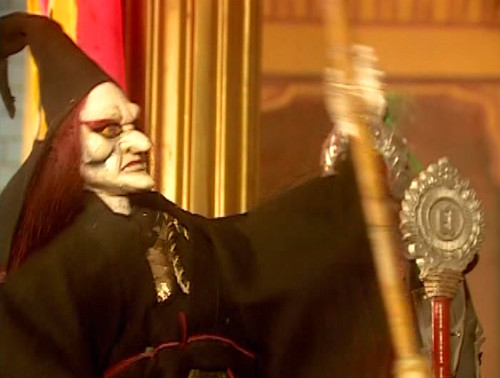 American culture does not take puppets seriously. Anything involving puppets is assumed to be cute and/or funny. I bet you can count on one hand every work of American puppetry which is neither a comedy nor for kids.

I’m an American too, and so it’s also my reflex not to take puppets seriously, even though I have been an (amateur) puppeteer myself. So while watching this show, there were time when I thought, “Oh, the puppets are travelling through the desert, how cute” or “Prostitute puppets, ha ha ha” (yes, some of the characters in this story are prostitutes).

However, I know that Taiwanese culture does not have this reflex. They take puppets as seriously as they take popular cinema, particularly the older generations. Puppet dramas can be for kids and/or comedic, but they aren’t necessarily so.

Encountering things like Taiwanese puppetry drive home the point that, yes, I am culturally American.

There is a movie, Legend of the Sacred Stone, which is available on DVD with English subtitles. Weirdly, the movie is in Mandarin – most puppet dramas are in Taiwanese (they also sometimes are performed in Cantonese). 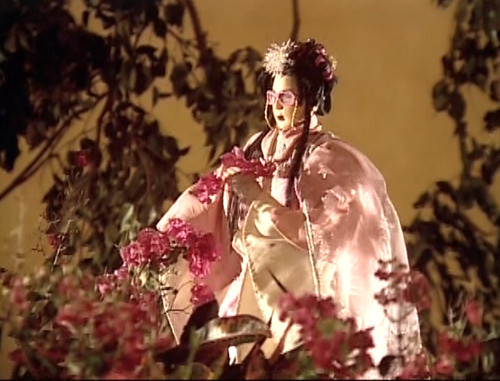 She works in a brothel.

Many Taiwanese people take a “the glass is half empty” view of puppetry because they know it’s not as wildly popular as it was a few decades ago.

I take a “the glass is half full” view because, even today, puppetry is way more popular in Taiwan than it ever has been in the United States.

What I take away from this drama is not the story, which, while somewhat entertaining, did not make much an impression on me. What I take away from it is the sheer creativity which goes into golden light glove puppetry as a medium. It feels new and fresh to me, and the special effects probably inspired a greater sense of wonder in me than the special effects of all the Hollywood movies I’ve seen in the last seven years combined.

Next Time: What the **** Are You Doing, Wei Xiaobao? The Duke of Mount Deer (novel).

One time, Sara K. was assigned the task of making bird puppets. She thought it would be really boring if they were perched, so she wanted to make it look like they were flying. It wasn’t enough for the wings to be outstretched – she wanted the wings to move as if they were flying. She found it was amazingly difficult to get information about how birds move in flight, and ended up reading a book Bird Flight about the science of how birds fly because she couldn’t find any other source. Who would have thought that taking a theatre class would lead to doing detailed research in physics and ornithology?