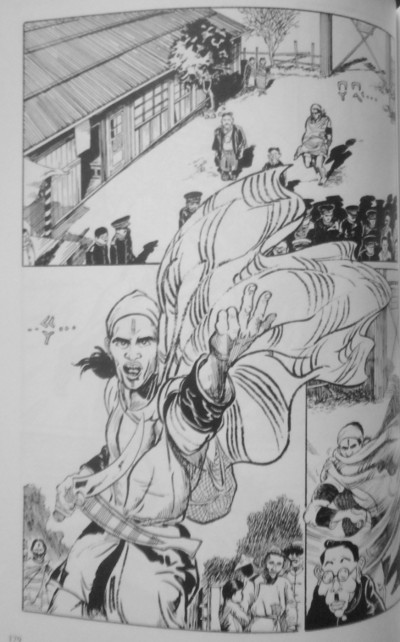 Practically everybody in Taiwan knows about Seediq Bale, the most expensive Taiwanese movie ever made. During my entire time in Taiwan, not a single other movie, Taiwanese or not, has made as much of a stir as that one. What few people know is that it was adapted from a manhua, The Wushe Incident (台灣第一部霧社事件歷史漫畫), which is gratefully back in print thanks to the success of the movie.

If I had to sum up Taiwan in two words, those two words would be “mountain island.” Those two words alone explain a great deal about Taiwanese culture, history, politics, geography, agriculture, economy, weather, etc.

For example, Taiwan is difficult to conquer/unify because it’s a mountain island. That’s why the indigenous peoples speak over 20 different languages – travel was so difficult that most people would never went far from their birthplace.

During my various trips to Taiwan’s mountains, when I didn’t have to deal with road closures, landslides, fog so thick that the driver can’t see more than a meter or two ahead, buses that got cancelled because the road collapsed, etc., I was lucky. To read about the condition of what until recently was one of Taiwan’s most important mountain roads, click here. Right now, I reckon at least half of the major mountain roads in Taiwan are closed or have major obstruction, and there hasn’t even been a typhoon recently. This is why Taiwan has been politically united for less than a hundred years. 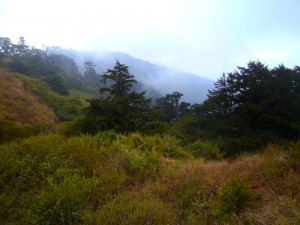 I took this photo near Wushe, where the story takes place.

Astonishingly, some of the “Japanese” mountain trails are still intact. I’ve been on a couple sections of the former Japanese Hehuanshan trail, which is one of the trails used by the Japanese to send reinforcements to Wushe. Along the trail there are the remains of Japanese police stations, schools to teach the indigenous children how to be more Japanese, and the graves of Japanese police/soldiers who died along the trail (most of them were killed by Mother Nature). Here is a description of an epic Japanese mountain trail running through Taiwan. 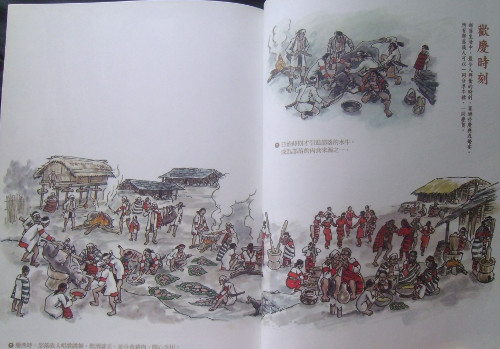 The manhua starts with a set of detailed color drawings showing various scenes of Seediq life.

The creator of the manhua, Qiu Ruolong, got stranded in Wushe (which is near Wuling pass, Taiwan’s highest mountain pass which is car-accessible – though I personally wouldn’t want to drive through it) when his vehicle broke down. While he was stuck in Wushe, he stayed with the local Seediq people, who gradually shared their history with him. This is how he first learned of the Wushe incident, and it fascinated him so much that he did more and more research – for example, he spent six months sewing traditional Seediq clothing. Eventually, he made this manhua.

The Wushe incident is historically significant as the last act of armed resistance to Japanese rule in Taiwan. 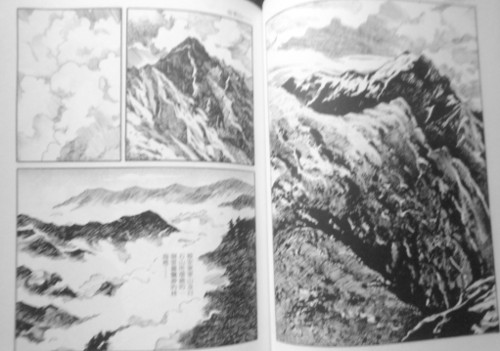 First of all, Qiu Ruolong manages to capture a bit of the majesty of Taiwan’s high mountains. Just flipping through the pages brings up memories of my trips to the mountains.

It’s not just that he draws spectacular scenery – he populates it with the characters, making both the people and the scenery look solemn and magnificent. 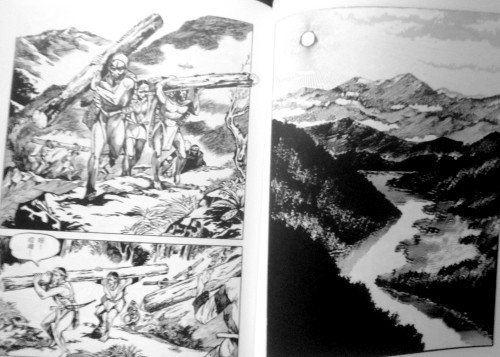 Sometimes, I just have stop and let my eyes rest on a page for a while. 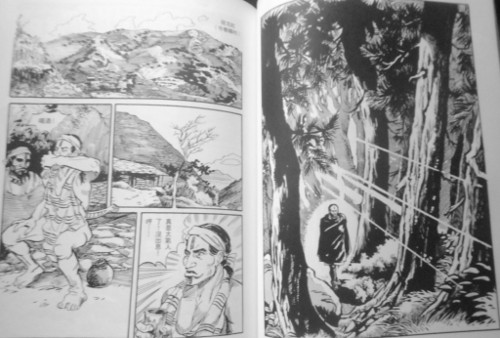 I love that halo of light around Mona Ludao as he walks through the dark forest, as the diagonal rays of sunlight frame him from above.

Which brings me to another point – Qiu Ruolong is great a compostion. 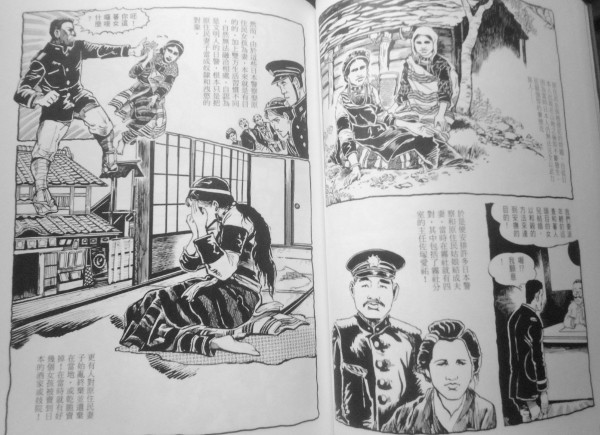 Take this page, for example. Here, Qiu Ruolong explains the way the Japanese treated Seediq women. These two pages can be split into about four parts – in the top-right, we see the Seediq women in their native village before any Japanese men bother them, in the bottom-right, we see the Seediq woman marrying the Japanese man and adopting a Japanese hairstyle (she does not look overjoyed), in the top-left we see the Japanese husband beating her, and in the bottom-left we see the Seediq woman weeping, isolated in the midst of Japanese architecture. Notice that the last section is the biggest, and the image of the weeping woman is the single biggest thing on these two pages. That makes that the center of this scene, and all of the other, smaller drawings are supports which explain the existence of this central image.

In the picture below, notice how all of the Seediq warriors with their backs facing the reader circle around Mona Rudao, whose front faces the reader. 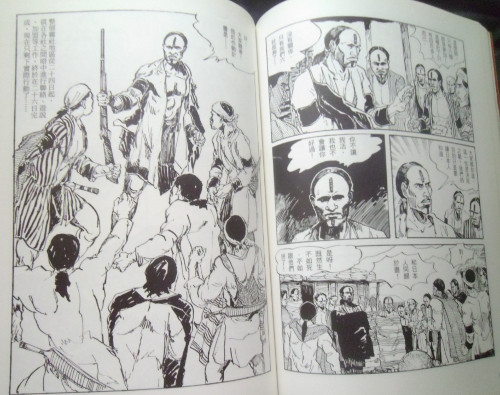 And in this picture (below), notice how the simple image of the stare, surrounding by black, contrasts with the detailed drawings around it. 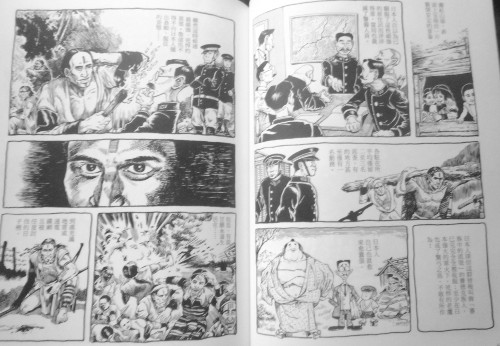 Qiu Rulong is a master of drawing violence. The way the Seediq warriors chop off Japanese heads is both silent and chilling. 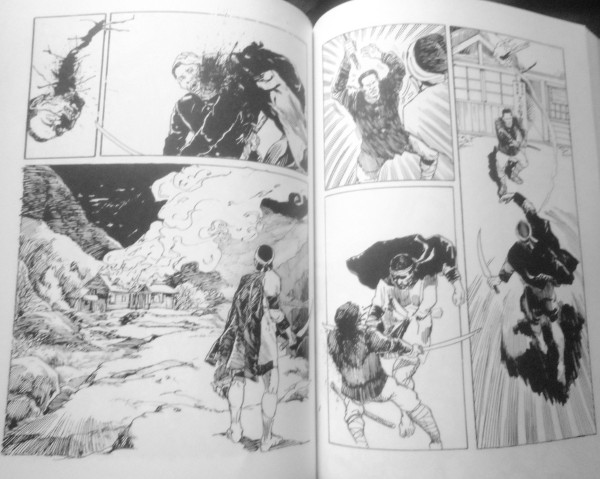 However, possibly the best part of the artwork is he really brings the Seediq people (and to a lesser extent the Japanese people) to life. This is partially because the drawings are so detailed, but it’s mainly because he puts a human in every figure. 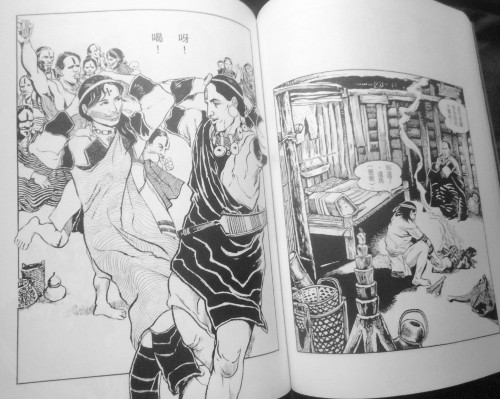 This is How You Make a Historical Graphic Novel

One of my biggest criticisms of In the Fires of 2/28 is that it didn’t focus on any specific characters, so it didn’t make the historical events feel personal. Qiu Ruolong does not make this mistake. While he often goes into digressions about Seediq life, historical background, etc., he centers the story around Mona Rudao and his family. Watching their personal journeys makes the story that much more powerful. 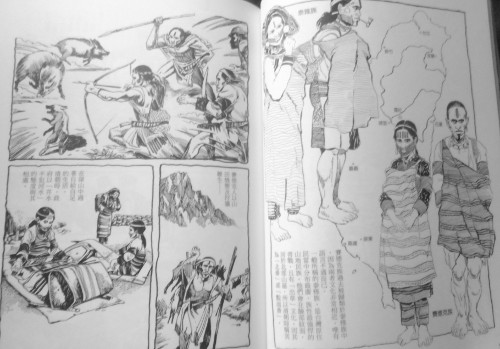 That said, I would have liked to have seen a bit more about the Seediq characters who adopted a Japanese lifestyle. The graphic novel shows just enough about them to intrigue me. 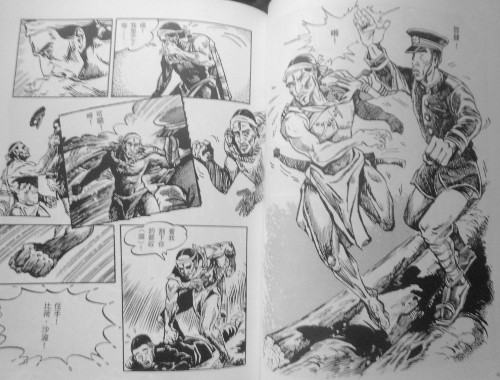 The Seediq people knew that the Japanese were treating them as objects, not as agents. They could feel it. The Japanese were constantly rubbing it in. And passively accepting it was destroying their psyche. 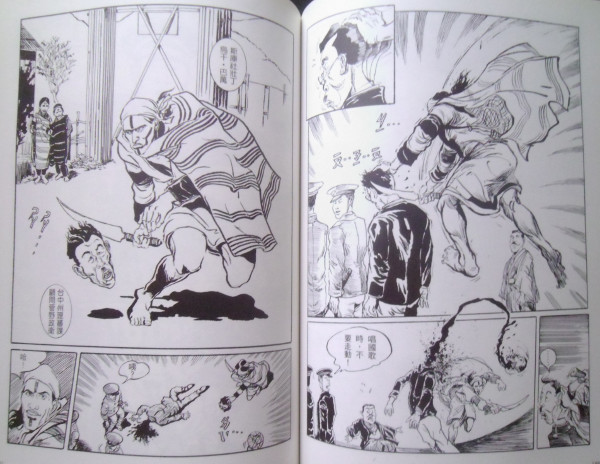 The Seediq knew that they were not strong enough to drive out the Japanese and restore their independence. But they felt they had to attack anyway. They had to prove to the Japanese, and to themselves, that they have some agency, and that they could not be oppressed without consequences. Suicidal action which proved they still had some power was better than powerlessly submitting to the Japanese.

This manhua is totally unavailable in English. And that’s a shame. This is a downright excellent graphic novel, and it’s only about 300 pages long – would somebody please publish it in English?

This manhua definitely exceeded my expectations. It brings out so many feelings … from relatively benign nostalgia of my trips to the mountains, to the horror of the humiliation and violence, to passionate desire of the Seediq people to assert power over their lives.

This manhua would not have been possible, or at least not as good, without Qiu Ruolong’s passion for the subject. I know the film Seediq Bale has been criticized for historical and cultural inaccuracies, and I cannot judge to what extent this manhua is or is not accurate. Accurate or not, it is clearly something that Qiu Ruolong cares about deeply.

Sara K. has had far more fantasies about living in the mountains that living by the beach. She is upholding the San Francisco tradition of disliking beaches (the beaches in San Francisco are at best unpleasant, and at worst life-threateningly dangerous). She is no doubt also influenced by her family – her father, who was born and raised in southern Florida, also has a distaste for beaches, as does her mother, who grew up on the coast of the Mediterranean. That said, it is still good for her to go to beach instead of the mountain once in a while. Heck, last week she went *swimming* for the first time in over five years.