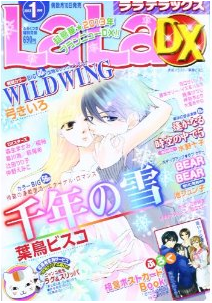 So, we’ve talked many times about the vague lines that differentiate shounen/seinen and shoujo/josei. In real life, there is no one age when all boys shift from caring about becoming ninjas to liking looking at girls in bikinis and there is no one moment when girls stop wanting to be a princess and suddenly start paying attention to the cute boy in class.

When we read manga that has been licensed from Japan, we’re often seeing the very best of the bunch—the Fruits Baskets and the One Pieces—and yet, when you see pictures of manga stores in Japan, there are acres of shelves filled with…what?

Today we’ll talk about LaLa Dx, one of those fields filled with flowers of shoujo romance that you are never likely to see here in the US.

LaLa is a relatively well-known monthly magazine, home to several properties that have made to our shores, such as  Yuki Midorikawa’s Natsume’s Book of Friends and Hiro Fujiwara’s Kaicho wa Maid-sama, because of the relationship Viz has with LaLa publisher Hakusensha. LaLa Dx was originally a supplement to LaLa and is now its own bimonthly shoujo manga magazine. Like most of the Bestu, Za and Dx issues of monthly manga magazines, LaLa Dx is smaller than it’s better-known sister—international size A5 rather than the typical B5 size for the monthly magazines. According to the Japanese Magazine Publisher’s Association, Dx comes in at about 67,050  per issue circulation in 2011 (as compared with LaLa‘s 155,950). Small, but packed, Dx comes in at a hefty 850 pages with surprisingly little advertising—none of these series are making it to anime. So for the 690 yen ($7.32 at time of writing) you’re getting a lot of love.

LaLa Dx has a website, but perched in that vague space between childhood and maturity, it’s not quite interesting enough to be appealing to children, and doesn’t quite have content for an older audience. Part of the LaLa family of websites, the site is mostly and advertisement for the current issue. Interviews and other features are integrated with the other magazines on the site. Giveaways are, as well. These days, you’re likely to find a LOT of nyanko-sensei items as LaLa gifts and contest prizes.

When one opens the pages of Dx, one is looking at story after story of young women and young men not getting together for any number of reasons—you know, typical romance stuff. The plot might be driven by horror or comedy, but the story is romance. Friendships will be torn, secrets will be revealed, kind faces will become stern and angry faces will prove to be protective.  This magazine is a field of smiles, of tears, of love. This is what you see, when you look at all those shelves in manga stores. And this is the space between pop idols and cute boy in class…with a little princess thrown in for good measure. ^_^