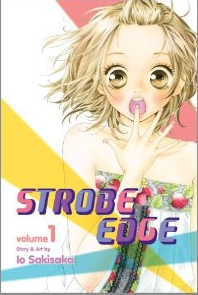 Here is your basic relationship equation: Girl (Ninako Kinoshita) likes school friend (Daiki Korenaga) but develops feelings for other school boy (Ren Ichinose). After finding out she might love Ren, Ninako discovers Daiki has feelings for her. So, Boy + Boy / Girl = Story. Not the most original idea but Strobe Edge uses what it’s got and delivers a good slice of teenage angst with some aplomb. Some parts I liked in its execution, some I did not. Shall we begin?

Understanding love is one of the fundamental questions of humanity. What is it? Why is so good and bad at the same time for us? Why do we need it so much? What does it feel like? For teenager Ninako, the fact that she’s never been in love, never been loved (that she knows of) and doesn’t know how it feels is the smartest and dumbest thing about this manga. I would like to say that there’s more to it than that but I respect when authors can just explore a simple idea and run with it, warts and all.

On one hand you want to scream at the girl for being so naïve that she doesn’t know what love is, presumably because she must be loved at home. I mean, I haven’t seen her family yet but she gives no indication that things are bad. Plus she has her friends in school, so she must know what love is! Yes, I know, love for your friends is not the same as love for a significant other. But the basic feeling is the same. I don’t understand why Io Sakisaka tries to present Ninako as laughing with her friends in school and then have her go into automaton mode around Ren. It’s like “What is feeling I have? I … feel? What is feel?” (Sorry, I’m being really simplistic with that last sentence but you get the idea). It’s a set of mental tracks that doesn’t seem like it’s going anywhere. I don’t know if I have the fortitude to root for a character who is that emotionally stunted.

Yet, in the same way, it is fun to watch her as she tries to make sense of these two guys and their attempts (or non-attempts) at getting her to like them. If I had to choose, I would say that Ren is a better character than Daiki. Daiki comes across as a nice guy but there’s something off about a guy who wants the girl but when he finds out that somebody who is dating his sister is interested in the girl, he warns them off from the girl but not his sister. I dunno, but Ren for all of his aloof slightly bad boy angle is a better idea in action as everybody, and I mean everybody, reacts against him. He doesn’t need to do anything and people take notice of him or are aware of him. Ninako is aware of him but as she gets into the mystery of who Ren is as a person we see her change as she realizes that by studying him, she fell in love with him. This is done in a slowly unfolding manner rather than BOOM! I LOVE HIM. Which would cheese me off as that isn’t what Sakisaka is possibly going for here.

The best way of describing the three kids; relationship is this: imagine if they were part of a solar system, OK? Ninako is in the middle of the system and Daiki is the sun. The sun in Ninako’s world is bright, happy to have her around and has always been in her view. But one day a gas giant, Ren, which had always been there but did nothing, suddenly exerts an influence over the planet in the middle. Not enough to completely dislodge it from the sun’s view but once the gas giant has started, a critical change occurs on the planet in the middle. Daiki isn’t going to give up Ninako to someone like Ren but I don’t think it’s as simple for them as “I must possess her!” because Ninako is trying to sort out her own head at the same time. Speaking of Ren, I don’t know why the author chose to insert that final revelation about Ren and his relationship with Ninako at the point she did. I can’t go into specifics without spoiling certain things, but it felt like it was an attempt to promote the idea that Ren really was too good to be true. I am not saying that it is unwelcome but it could have been left until volume two and that would have been a better jumping point for the cast to deal with in the rest of volume two. It’s kind of happily maddening, that’s how I would describe it.

Is there a point in saying that the artwork in this is gorgeous? It’s not master craftsmanship levels at work but the story that it tells, the work on display suits it perfectly and I don’t have a problem with the amount of daydreaming the cast seem to engage in as long as the art looks like this.

I am a bit of a soap drama watcher and while I don’t need to obsess over every episode of the shows I watch, I would say that Strobe Edge has some of that going on here. This first volume presents a few problems for me, that much is certain, but there’s just enough in the way Sakisaka presents the cast and the setup that doesn’t allow me to dismiss it out of hand without giving it a proper whirl. Much like those soaps I am not supposed to like.