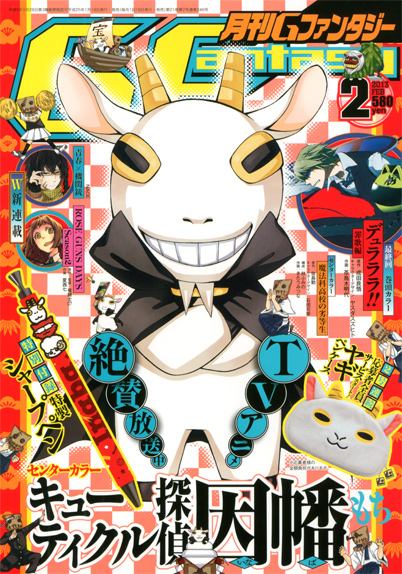 On Magazine no Mori we’ve discussed the issue of the demographic categories of manga several times. Today’s review is a perfect example of when those categories fail to be useful.

GFantasy, published by Square Enix, (along with what often seems like an endless number of magazines that have the word Gangan in the title) is listed by the publisher as a shounen magazine. And it is, quite likely, read by some number of young males. There is a lot of action in this magazine. But. The series best known from this magazine, has another audience entirely.

For GFantasy is the home of  Black Butler by Yana Toboso. It is true that Jun Mochizuki’s Pandora Hearts and Ryhogo Narita’s Durarara! have as much to appeal to men as women, however there is an extraordinary amount of “pretty boys in ridiculous clothes” and a fair dollop of slashable male pairs for a typical “shounen” magazine. A series like Cuticle Detective Inaba makes more sense, really, when you assume that the audience is female. Pretty boys with animal ears, shotacon, a cross-dressing boy…these are not typical tropes meant for a male audience.  GFantasy is really better understood as “shounen for women” with a fair bit of cross-over audience, as indicated by Peach Pit’s Zombie-Loan, and the Higurashi series.

As you can see from the many titles that have been translated, Yen Press has a pretty well-developed relationship with Square Enix and the Gangan imprint manga. (The anime for many of these series have been picked up  by Funimation and Sentai Filmworks.)

GFantasy began life back in 1993 as Fantastic Comic, had a few special releases and in 1994 was renamed GFantasy. There are no circulation numbers for GFantasy on the JPMA website. At 580 yen ($6.43 at time of writing) for 650 pages, it’s a good bet you’ll get your money’s worth, as long as you like fantasy adventure, perhaps spiced with a little romance.

The GFantasy website is quite good, with excited focus on the enclosed giveaway that month, news of series that have been transformed to anime and other media and a sample comic in 2 parts. More sample chapters can be found listed under “G Stories” and they have  a running prize for submissions to the magazine. (I really like manga magazines that do that. Recruitment for the next generation is an every-day job.) Unusually, the magazine has a blog on their website, as well as the usual news and fan mail form.  In my experience, this indicates a slightly higher than usual understanding of fan community by the editors and, probably, a slightly higher than usual engagement by the audience.