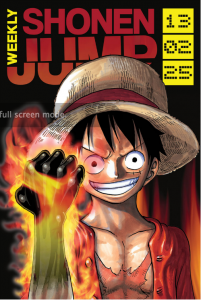 It has been said, that while one lives the other must die, and so on throughout the ages while memory still exists. I’m talking, of course, of two of the big Shonen Jump three—Bleach and Naruto. While listening to one of my favorite podcasts, Weekly Manga Recap (you should check them out, they’re pretty good), the hosts mentioned they’d noticed that when Bleach was good Naruto was bad, and vice versa. I’m not sure how accurate that is, but after this week’s chapter it’s certainly a thought worth considering.

One Piece Ch. 699
Chapters like this one always remind me that as good as the action in One Piece is, the comedy is just as good. Perhaps this is part of its secret of success, but either way there are a variety of different types of chapters Oda can write that will all satisfy. In this case a good chunk of the enjoyment came from the comedic value of this chapter. All I really need to say for this week is, Momonosuke is a quite possibly the most evil character in this entire series. Never have I laughed at, and simultaneously hated, a little child so much.

The reveal of Doflamingo’s decision not only came much faster than expected, but his choice was not entirely what I was expecting either. I look forward to see what Oda does next chapter, as the big seven hundred finally arrives. 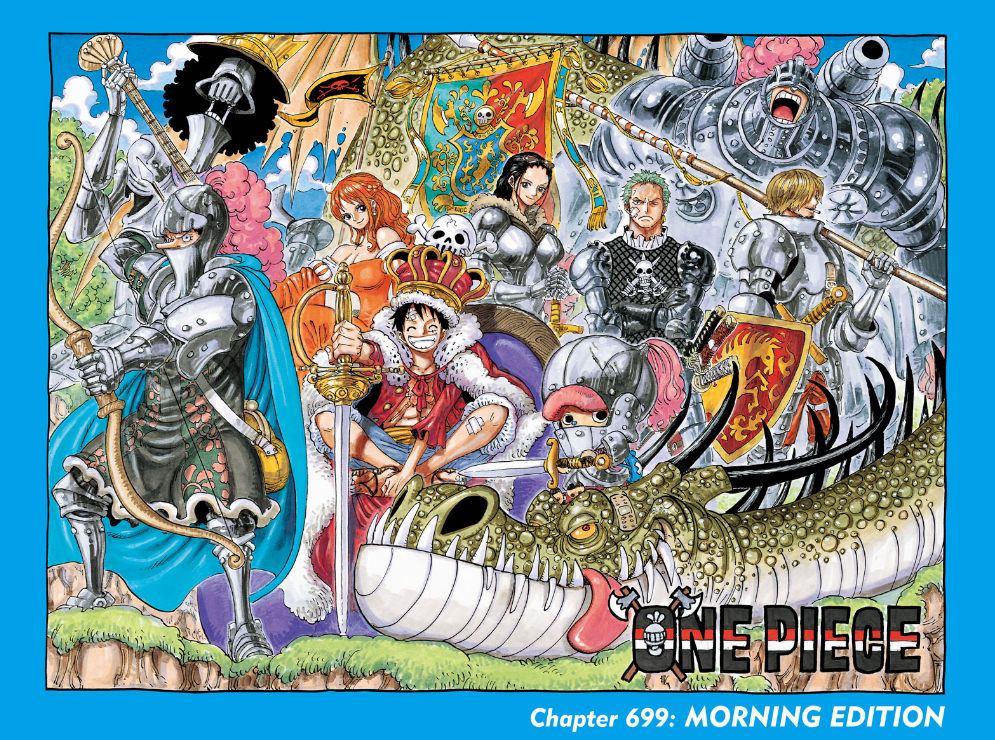 Toriko Ch. 223
Toriko this week continues the series’ current creed by giving us nothing but action, action, and action. Oh, and also a certain character turns out to be a woman in disguise. I wonder if there is some kind of connection between how much of a sausage fest this manga usually is, and the fact that we’ve had two women disguised as men in this series.

For fans of brutality in shounen fighters, Toriko has you covered in spades. While most fighter series don’t shy away from depictions of extreme violence, Toriko is the only one that regularly shows characters getting brutally maimed and treats it like it’s absolutely nothing. Yet somehow, despite the fact that even the lower level combatants are tough enough to survive lethal blows, each time someone gets seriously injured I still have to wince a little.

Naruto Ch. 621
What can I say, there was way too much fighting, though the thousand-armed kanon was a cool technique, for very little payoff. I like fighting, don’t get me wrong, I like it a lot. Why else would my favorite series be shounen fighters. But there has to be a reason for it. And going from a fight in a flashback, to not-a-fight in an even deeper flashback bugs me just a little bit. I imagine it will take a while before we get some sense for what is supposed to be going on, but for now I can’t say I’m particularly enjoying the ride. Manga on a weekly serialization schedule needs to make each chapter count, rather than asking readers to be patient for the payoff. Perhaps it would make for a good read in the collected tankobon, but on a weekly basis Naruto has been leaving a bit to be desired.

Nisekoi Ch. 063
I never realized how well cute and hilarious go together. I will let the page speak for itself, with just a little bit of setting. This page takes place right after Onodera finds out Rakku and Chitoge did not in fact spend the night together at a luxury hotel. 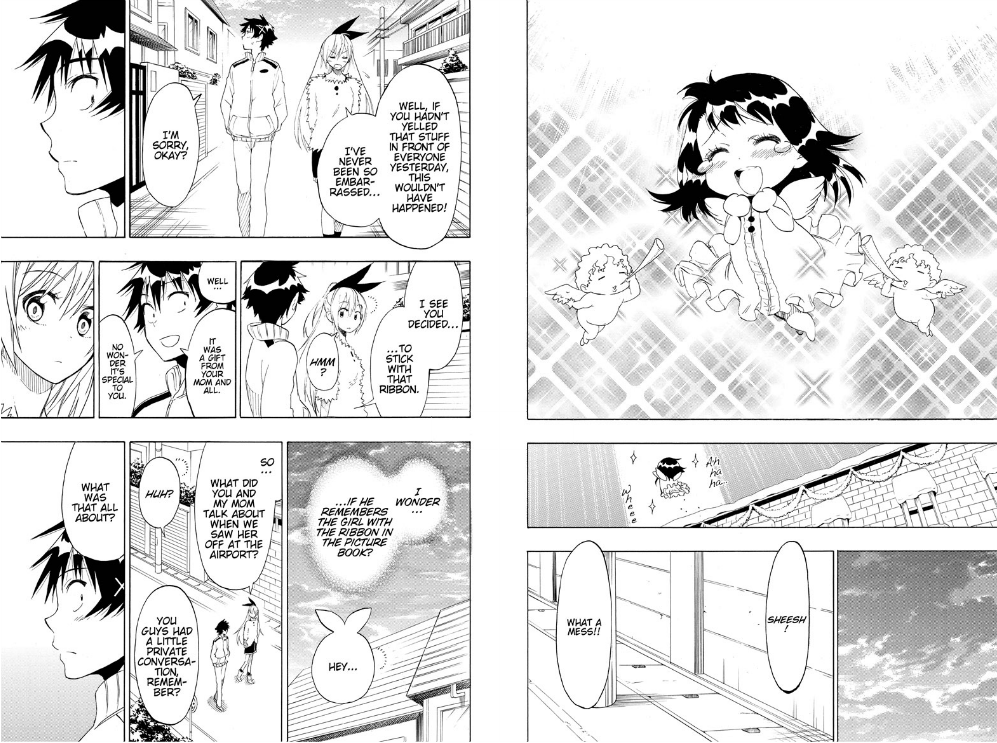 I think that speaks for itself. This was a great chapter, the reactions to the misunderstanding were great, and somehow the joke worked without getting stale. It’s not like this is the first time that characters have misunderstood each other. Perhaps what helps most is that Rakku immediately sets everyone right after finding out what everyone thinks happened. 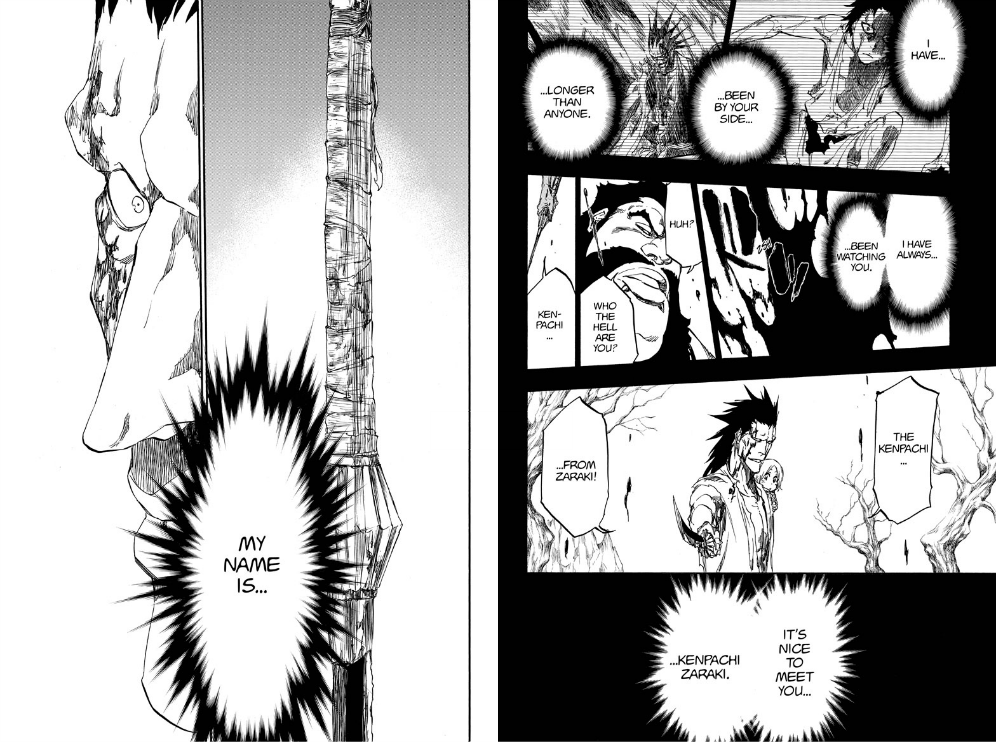 I have been waiting years, literally years, for this moment. And what’s even better is that it isn’t a disappointment. Kenpachi finally hears the voice of his zanpakuto. I’m still standing by my prediction that Kenpachi’s shikai isn’t meant for fighting at all, but that instead it will give him healing powers. Mostly because it would be a way to keep Unohana in the story, but also because it would be a fun bit of irony for Kenpachi.

World Trigger Ch. 003
Could we please stop with the bullies? They really aren’t that interesting, mostly they’re just cliche and the kind of villains I would rather wee disappear completely. I’ll admit that seeing Yuma intimidate them is amusing enough, but I just can’t stand seeing such an old cliche dragged out again. I will say, though, that I am intrigued by what Yume’s role in the story is. My current theory is that, as a neighbor, his presence is drawing the monsters to wherever he is. That would explain why both attacks happened so close to him.

Cross Manage Ch. 022
You wouldn’t think the fanservice chapter would be so good, but here we have it. This chapter was as good as I expected. Nacchi got the necessary character development she needed, and while the cheesecake in this chapter smelled of desperation to rise in the rankings, I enjoyed the rest of the chapter quite a bit. There were plenty of funny moments to go along with the character building at the end. I hope Cross Manage is able to survive the next set of cuts from the magazine. 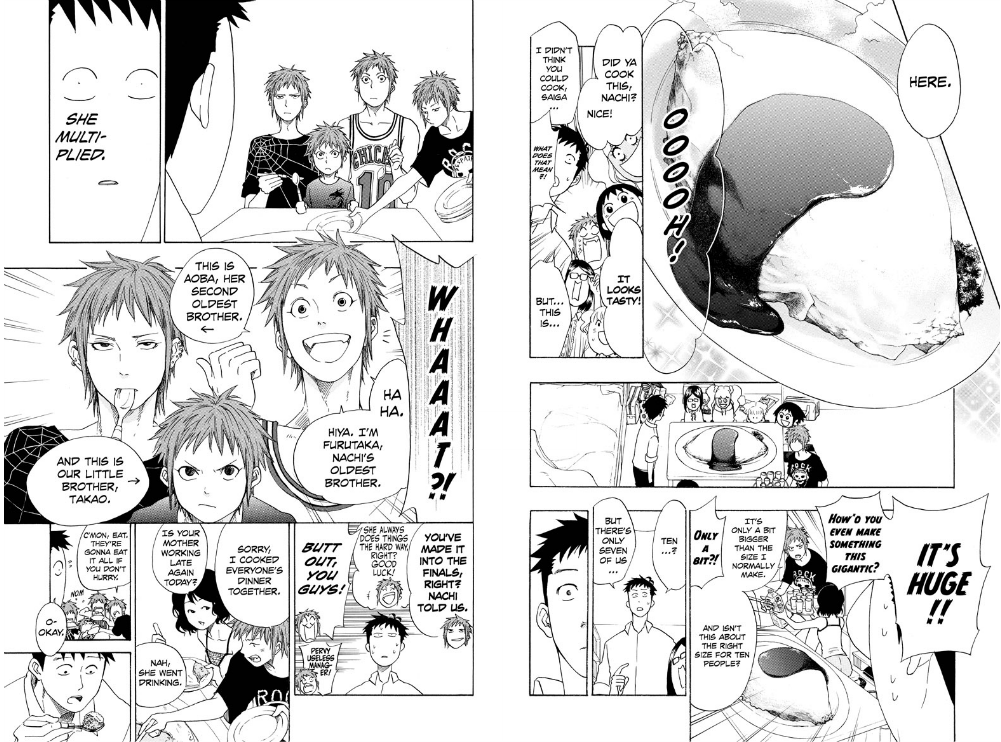 One-Punch Man Ch. 006
One-Punch Man continues to be great. Less time was spent focusing on Saitama, in favor of our new character Genos. I like where the series is going with him as the first proper supporting cast member. The joke of the chapter is of course the same as before, but somehow, despite being a straight rendition of the basic joke, it manages to still be funny every single time. Perhaps this week it’s because Saitama finally gets the catharsis of slapping a mosquito.

Dragon Ball Z Ch. 004
This is where things get good. Goku and Picolo team up to battle Raditz, and the story feels like it is really starting now. It’s a bit harder to review these chapters, mostly because I’ve read them before and don’t really have my gut reaction to go off of. Still, I’ve been enjoying the current run of chapters, and look forward to more. Reading them again after so long I do notice a few things here and there. Mostly how fast the plot seems to be moving forward. I know Dragon Ball Z isn’t exactly known for its speedy plots, but this feels a lot faster than I remember. And not necessarily in a good way. Keep in mind, the status quo of the series changed just now, with the revelation that Goku is an alien. It’s a lot of information that we’re supposed to comprehend right away. Granted we’ve had a few years to internalize it all, and most fans knew about this part of the story before the original Dragon Ball. Still, I can only imagine what it must have felt like reading this all those years ago. I wonder how many people were decrying Toriyama for jumping the shark.