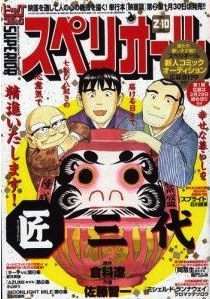 One of the tropiest tropes about manga culture in Japan is the old chestnut about salarymen reading manga on the train while commuting. While I have seen this only rarely in my times in Tokyo, it is still quite true that salarymen read manga. Just not so much on trains. You can find them after work hours, avoiding going home, clustered in front of the manga magazine racks in just about any convenience store. If they are reading manga (as opposed to just plain old men’s magazines) the magazines you are likely to see them reading are not the oversize phonebook-like magazines like CompAce or Ultra Jump, but thinner, staple-bound books like Biweekly Comic Magazine Big Comic Superior (ビッグコミックスペリオール).

While magazines like Big Comics Superior fill magazine racks at every corner store, you’re unlikely to have heard of many series from its pages. Ohtagaki Yasuo’s Moonlight Mile may have been made into an anime, while Team Medical Dragon by Nagai Akira and Koyasu Tamayo’s Aibo  have been made into popular TV shows, and Okuribito by Sasou Akira has been turned into a movie, these were “popular” in only Japan and not outside. If there is any one series that westerners are likely to know, it is because it is a staple of Japanese manga stores everywhere, Azumi by Koyama Yu. Oh yeah, and Mobile Suit Gundam Thunderbolt might ring a few bells, as well. ^_^

The Superior website, has the usual volume release info, and information on series being transformed into other media, but surprisingly, a great number of the series have chapters online. This offers readers a way to try out various series before buying the magazine. It’s nice to see a Japanese publisher moving  sample chapters online.

Biweekly Superior began life as a twice-monthly special issue of Big Comic Original, but when the sales equaled Original‘s, Superior was split off as a separate magazine in 1987. JMPA’s 2011 stats put monthly circulation at 186K,  down significantly from 2010 when it was selling 246K a month. Still for 300 yen, ($3.33 at time of writing,) the magazine is chock full of science fiction, adventure, drama and sports.

If you want to know what the office workers of Japan read, take a stab at being Superior for a day.