We’re just one week away from being up to date with Japan. And all I can say, as I sit here pondering these most recent chapters, is that I’m glad I don’t have to sit here with no new chapters, unlike those reading scanlations. My self control at not reading ahead has paid off.

The big news this week is that One Punch Man will be added to Weekly Shonen Jump (the Alpha has been dropped from the title). I haven’t read this series myself, but we did do an episode on it. I have to admit, this was not one of the series I was expecting to make it into our Jump. Still, I hear it’s a good series, and look forward to reading it. Now someone at Viz please get Beelzebub into Weekly Shounen Jump? And Sket Dance too, please.

What? Me? Demanding? Perish the thought.

Naruto Ch. 615
It’s times like these that make me glad I grew out of my shipping phase a long time ago—though not so long ago that I can’t still feel the sting of a sunken ship. That being said, I actually ran into spoilers about this chapter two weeks ago, because there is nothing in this world more vindictive than a “victorious” shipper. And they want to make sure everyone on the internet knows about it, even those of us who have been sticking to the legal release.

What? Am I sounding bitter? Huh, I wonder why that could be.

I could go into details why I don’t think this chapter is that big a deal, but that would only incite comments against me. Though, too be fair, I’m almost thinking that even those comments are better than no comments.

From a non-shipping standpoint, I feel that this chapter dragged a bit. The entire run was used to build Naruto’s confidence back up, and apparently build up the moment between him and Hinata. Frankly I would probably enjoy this more romance if Naruto weren’t so schizophrenically written. The biggest problem I find with this series is that I’m never sure exactly what Kishimoto intends to do. He rarely gives romance a focus, and when he does it seems to come out of nowhere because it’s involving characters who haven’t done anything in forever. And he seems to relish sending mixed signals, making it hard for the casual reader to really catch on to what exactly his end goal is.

The entire purpose of this chapter is giving Naruto and Hinata a moment, and since I’m not really invested in that relationship (personally, I’ve always thought Hinata was too underdeveloped to be really interesting), I can’t say this chapter did much for me. 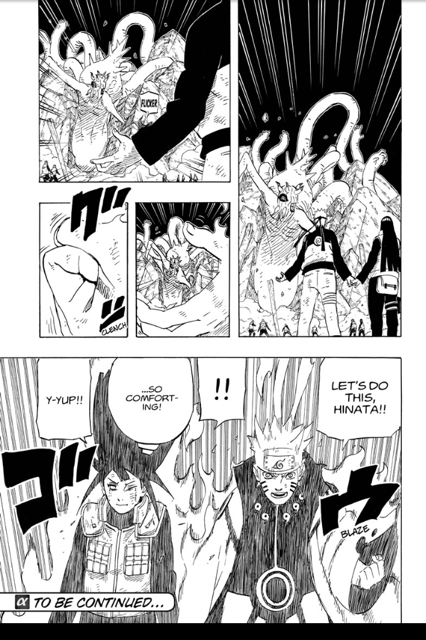 One Piece Ch. 694
All this talk about shipping makes me appreciate Oda’s no-romance stance all the more. It’s refreshing to know that I can read this series and when I go to participate in the fandom not all of the discussion is about romantic drama.

The main thing I feel worth noting is that Baby 5’s devil fruit ability raises some interesting questions. Is she a logia or a paramecia? If she’s a paramecia then she’s an overpowered paramecia since she can reconstitute herself. If she’s a logia then does this mean that those types of fruits aren’t limited to elemental forms? None of these questions are answered, but I hope that eventually we will get an answer.

The ending, well, I won’t give it away, but I have to say I did not expect the story to go the way it’s going. Monet’s supposed fate comes as a bit of a surprise, though I doubt this is the end of her, since hints in previous chapters have suggested that there’s more to her than we’ve gotten this arc.

With the exception of a bit of deus ex machina I have to say this was a solid chapter, and I look forward to more. As always.

Cross Manage Ch. 016
Oh hey, look, they’re playing a match. A sports match in a sports manga? What a novel idea. Though, to be fair, for this series the focus on the characters rather than the sport was established early on. It’s not about learning the sport as much as it is the sport acting as a vehicle for the characters’ personal growth. While seeing them grow as a team is interesting, I personally would have preferred some more development for the team members before moving to this stage. I can’t help but feel that this fast pace is the death throe of a manga about to be cancelled. But, if it does survive I wouldn’t mind reading some more.

Bleach Ch. 522
I suggested it in my last column, and it stands confirmed in this chapter. Kubo just wants to draw lots of attractive women, preferably with big breasts as well. Or maybe Nimaiya is Kubo’s current author avatar. But, sexy antics in the first half of the chapter aside, it looks like we’re going to get to see some fighting next chapter. I do like the idea of Ichigo and Renji having to reconcile with their Zanpakuto, and look forward to seeing what Kubo does with that.

Or, if he wants, he can just keep drawing sexy women. At this point I’ll take what I can get. 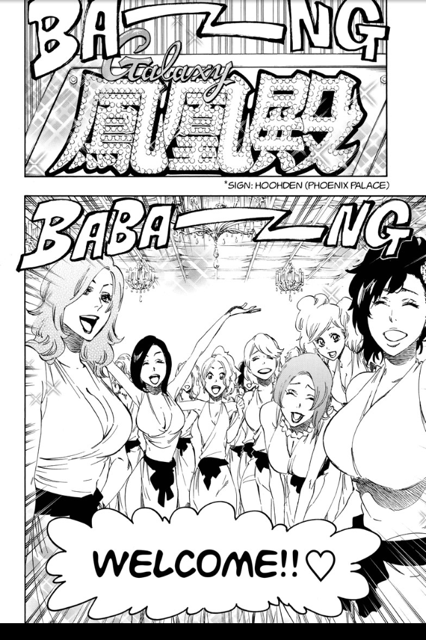 Nisekoi Ch. 957
Ah Nisekoi, you and your silly antics. I didn’t think it was possible to make me like ALL the girls in this series. It’s fairly obvious, since this is the way these series work, that Raku will end up with Chitoge. And while I have my own preferences, I have to admit that Komi Naoshi does a great job of making me like all the girls fairly equally.

Which is why this chapter works for me. If I didn’t like Chitoge I wouldn’t like this chapter. Her escalating attempts to get Raku to notice the little changes she’s making to her appearance are hilarious as they get more and more obvious and everyone but Raku seems to be noticing. And again, there are some great expressions this chapter. 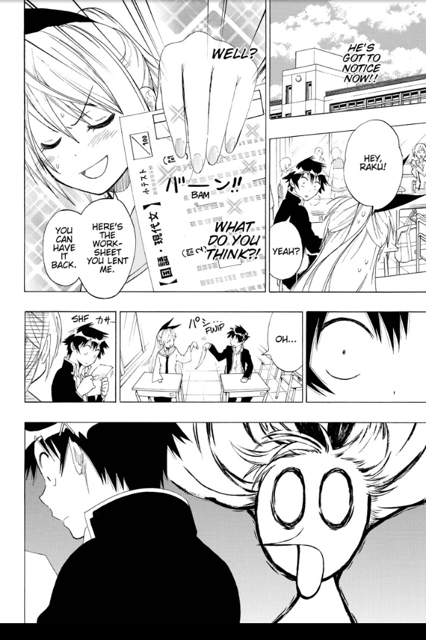 Toriko Ch. 217
The odd thing about Toriko is that it has a fairly large cast, but characters are constantly being introduced and then forgotten about, only to be brought back like it’s no big deal. Seeing Melk back was a fun bit of the chapter, I like that she actually came to meet Komatsu instead of just watching him from the the stands. Though it was odd that neither she nor Komatsu said anything to each other.

The other thing I have to say about this chapter is something I never thought I’d say. But, well, there’s a first for everything.

I really, really actually wanted to see the tournament play out. I know this is something nobody in his right mind would say. But I really like cooking and one of my favorite parts of Toriko is seeing the cooking. This was like an arc made just for me. And it looks like it will be cut short. Oh well, I’m sure whatever Shimabukuro does next will be interesting too.

Blue Exorcist Ch. 042
While I enjoy Blue Exorcist, it’s currently suffering from me not having the funds to buy all the volumes yet. So most of these chapters I’ve been reading don’t have a larger context for me to put them in. Sure, I enjoy the characters. Sure, the overall story, while unfocused from what I have read, is pretty good. But at the moment it doesn’t really have anything that it’s really building towards. Or at least that’s what it feels like to me. I don’t have a single goal to watch the characters progress towards, or at least they don’t seem to be actively pursuing that goal. Whenever a manga does that it ends up feeling disoriented and suffers as a consequence.

As far as this chapter is concerned, the further development that Yuki is undergoing (that he himself might be a demon as well), is pretty well-executed. The final page is especially creepy. As long as the manga does a better job than the anime did with similar material I think I’ll be satisfied.

Nura: Rise of the Yokai Clan Final Chapter
I’ve been a fan of manga long enough and seen enough series end to know that not all endings are as satisfying as Fullmetal Alchemist‘s. In fact, most endings are downright disappointing. Not that I was expecting much from Nura. I enjoyed it more or less while I was reading it, but eventually I got to a point where the flaws kept sticking out far too much for me to enjoy. It was a fairly decent shounen action series, but it suffered from lack of focus and severely crowded paneling. Were I to recommend something to the author were he to try the series again, I’d say the cast needs to at least be cut in half, and the distinction between Rikuo’s human and yokai self should get some more explanation.

As for this chapter, It was an ending to the series without feeling excessively rushed. The series never really got fleshed out further after the move from Shounen Jump, but for what it’s worth I’ve seen worse endings in the series that don’t make it past twenty chapters in Jump. For those, it’s mostly “there are more adventures but we can’t show them.” With Nura, at least it’s a conclusion. Sure there’s a fair bit that needed wrapping up that never did get wrapped up, but I’ve come to believe that sometimes it’s better to have something left open-ended rather than risk having it end in a way you don’t like.

I’m not sure how I would feel about this chapter if I were more invested in the series, but as it is I can look at it from an academic standpoint. The ending wraps up the main conflict, but it does it in a way that leaves absolutely no impression. The characters—of which there are too many to really care about—end in a place that is no better or worse than where they started. I probably would have liked to see some more development, but I can’t say I was really expecting it.

And that’s it for this week, if you want to hear my expanded opinion on last week’s chapters, go over and check out my podcast, Manga^3 Episode 030 – January 7, 2013 – Character Death and Fairy Tail Vol. 3.