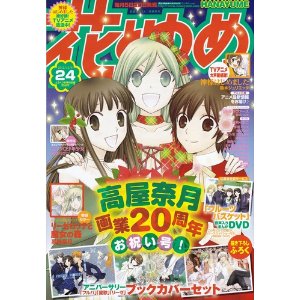 Here on Magazine no Mori, I seek to introduce you to the rich and varied world of manga magazines available in Japan. From kids’ books to the kind of thing you might actually see that mythical salaryman read on that mythical commuter train, I’ve barely scratched the surface. If I’m fortunate enough to continue this column for ten more years, I will still have barely scratched the surfaced, there are just that many manga magazines…and new ones popping up all the time.

Today I wanted to step off the unbeaten path I usually take through this forest of magazines, to look at what is arguably the best known manga magazine that no one in the west has ever read. ^_^

Hana to Yume (花とゆめ) magazine published by Hakusensha is the source material of a huge chunk of Viz’s shoujo imprint (and before that, much of Tokyopop’s shoujo in later days.) Just a random sampling of titles from this magazine will be instantly familiar to most western manga readers: Tachibana Higuchi’s Gakuen Alice, Suzuki Julietta’s Kami-sama Hajimemashite (published in English as Kamisama Kiss), Oresama Teacher by Izumi Tsubaki,  Nakamura Yoshiki’s Skip Beat.  Hana to Yume was also the magazine in which the record-breaking Fruits Basket  by Takaya Natsuki, ran. Two of the seminal (yes, pun intended) BL classics that comprised the vanguard of the Boy’s Love genre back in the day, Yuki Kaori’s Angel Sanctuary and Matsushita Youko’s Yami no Matsuei (Descendants of Darkness) also come from the pages of Hana to Yume. For as comprehensive coverage as possible on Hakusensha titles available in translation, check out Sean Gaffney’s blog,  A Case Suitable for Treatment  here on Manga Bookshelf.

In fact, so many titles are familiar to the English-language manga audience, it’s worth taking a look at the Wikipedia article for the magazine just to take stock of all the titles that *haven’t* made it over here, among which is one of my favorite series of all time – Shinji Wada’s Sukeban Deka, Which brings me to an interesting point about fashion in manga magazines. In the 70’s and 80’s, Hana to Yume was a “weird” magazine, full of speculative fiction series, action, and really off-beat stories. I picked up a recent issue to find that the current art style is significantly simplified and the stories, while they may have supernatural elements, are mostly romantic comedies.

Hana to Yume has a website, Hana to Yume. com,  with the traditional girly, pink, sparkly, flower-y look, previews of this and next month’s magazines, a game corner, and a branded “mangaka course.” The magazine also has a stripped-down Hana to Yume Online site, suitable for reading on mobile devices. The lack of decoration makes the exact same content suddenly appear more mature.  ^_^

Hana to Yume premiered in 1974 and now has supplemental titles,  Bessatsu Hana to Yume  and The Hana to Yume. These come in a smaller size than the monthly magazine, which sells for 350 yen ($4.24  at time of writing.), with about 500 pages per issue – and one of the strongest creator line-ups in manga. The most recent data from the Japanese Magazine Publisher’s Association put the magazine’s monthly circulation at 189,113 for 2010-2011. Thanks to English-language translation Hana to Yume series are probably better loved here, (as unknown as the magazine itself is,) than in Japan where its standing among girls’ comics magazines has been slipping – from 4th in 2006, to 7th in 2010.

If you’re a western fan of shoujo manga, Hana to Yume has probably been your gateway drug. ^_^

Hana to Yume, by Hakusensha: http://www.hanayume.com/hanayume/index.html