What Happened?
With the rest of the cast joining in on the attack on Central, Alphonse and Heinkel, the Lion Chimera, stay behind to detain the Homunculus Pride. Unknown to them, Pride calls for help, and is answered by the Crimson Alchemist, Kimbley, who easily takes out Heinkel and frees Pride.

What Happens?
Alphonse, badly injured by Pride, manages to create a dust cloud and tries to escape with Heinkel. When he refuses to leave Heinkel behind and save himself, despite the Chimera’s insistence, Heinkel gives Alphonse the philosopher’s stone he picked up back in the North. 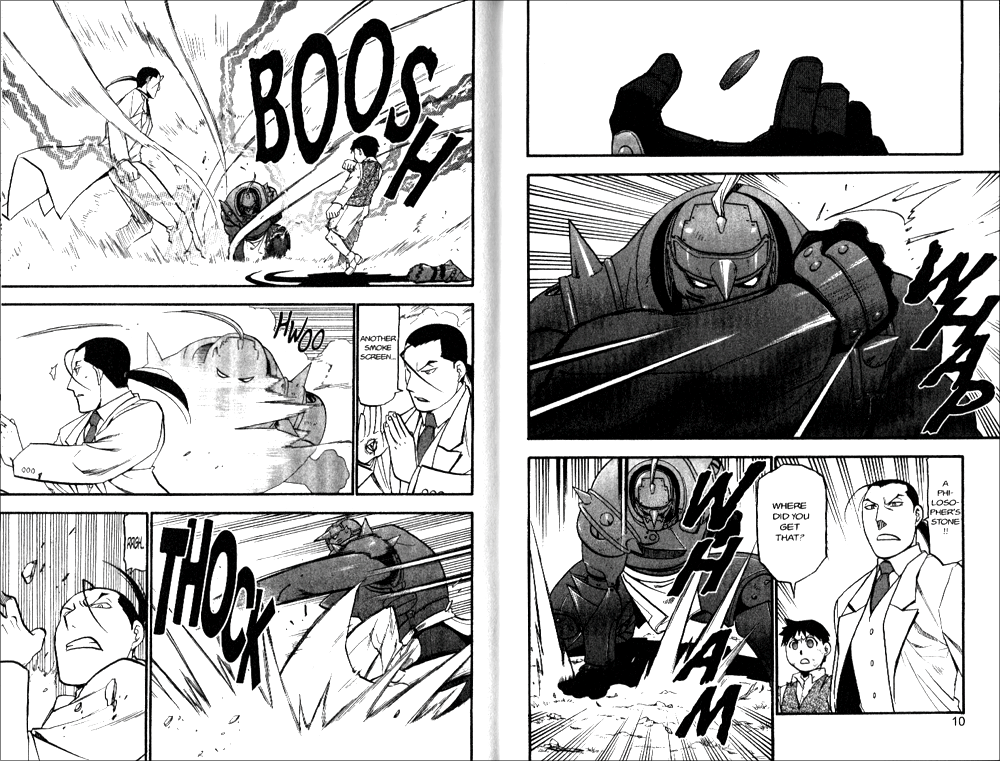 Armed with the power of the stone, Alphonse fights Pride and Kimbley, even going so far as succeeding in trapping Pride again. He and Kimbley share philosophies for a moment when Kimbley reveals that he has another philosopher’s stone hidden away. With it, he frees Pride and the battle seems to turn against Alphonse as he is restrained.

Alphonse reveals that he no longer has the stone, having given it to Marco who was using the dust to read the direction the wind was blowing. Just as he is about to warn Kimbley, the transformed Heinkel pounces from the dust and sinks his teeth into Kimbley’s neck. 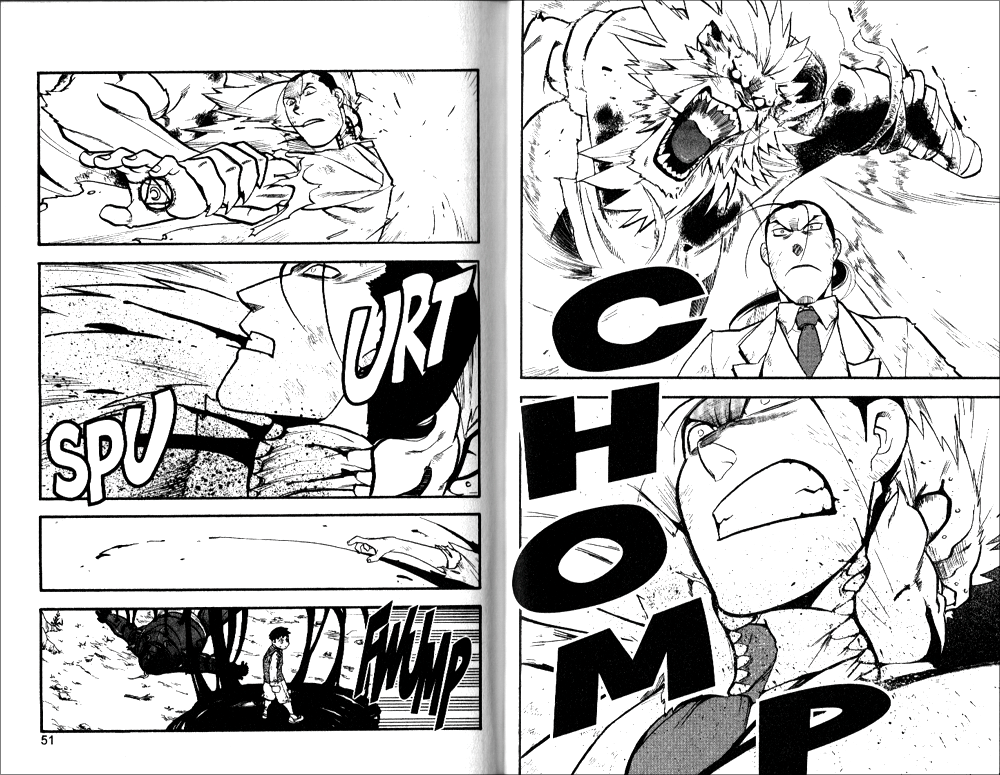 What Does it Mean?
It means that Hiromu Arakawa is a master of cliff hangers. Consider this, those of you that read these chapters when they were first published in the States. Imagine that you were reading chapter 92 as it was being released monthly. Really let that image sink in—consider that Kimbley was one of the biggest bastards in the entire Fullmetal Alchemist series. Imagine the sense of elation at seeing his doom. Imagine the nagging sense that maybe he would still survive. Was this the end for him? Characters in manga had survived worse. But then again, Fullmetal Alchemist was always more realistic about what kind of injuries could be survived. Imagine, if you will, all these thoughts racing through your head, all heading towards the realization that you had to wait another month before you get your answers.

That’s what it must have been like, reading this fight as the series was being published. Reading it from the volumes all one must do is turn the page for the next chapter. Reading it chapter by chapter as each new one came out, would have made that moment all the more sweet and frustrating.

But what about the fight itself? Well, for one it was Alphonse’s big character moment. He’d had his moments in the past, but this was the first time he really got to dish out some punishment, and he did it beautifully. In my last column about Fullmetal Alchemist I talked about the Armstrongs’ fight against Sloth. While I very much like that fight—as I do most fights from this series, of which there are many that will be covered in this column—anytime Edward or Alphonse fights it’s always a much more interesting fight. 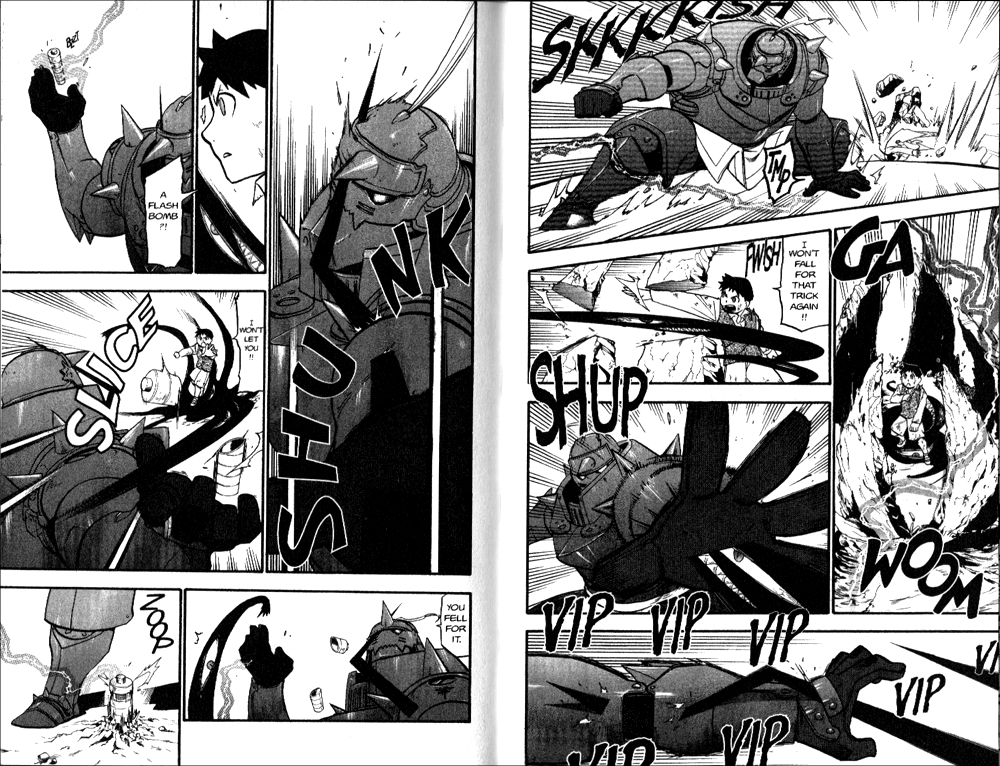 Rather than focus on just one type of alchemy, the Elric brothers can form almost anything they want, which makes for some very interesting fights that rarely get dull. This one especially used a lot of interesting trickery, which was necessitated by the fact that they were fighting a far superior opponent. Even at the end they are unable to defeat Pride and have to escape with their lives.

There are a lot of reasons to like Fullmetal Alchemist. One of my main reasons is perfectly illustrated in this fight. The deep imagination that went into the creation of this world, story, and magic system. It’s one of my all-time favorite manga, and I can’t wait to spend more of your time ranting about how awesome the fights are.