You may read Part 1 here.

It would probably be unfair to say that the fights in this series are just indiscriminate sword-clanging. But I think most of the fights are no more than one notch above that level. 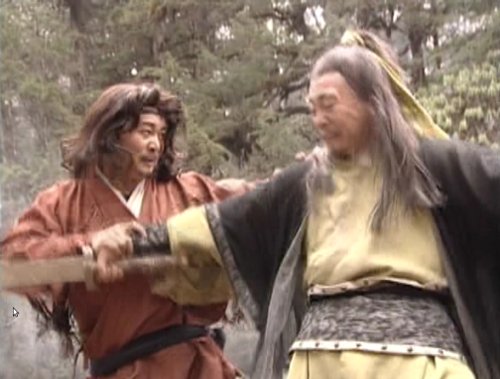 The thing is, to get good on-screen fighting, you need the following:

All of the above costs quite a bit of money. Particularly the rehearsal time.

I suspect this was outside this TV series’ budget.

Given that they couldn’t afford good fighting, I think they handled the fights pretty well. Though the choreography itself was not exciting, at least the fights moved the story forward. And Jin Yong writes his fight scenes so well that they would be engaging even if the performers were wet noodles.

The standout for me is definitely the big fight at the end of episode 25 / beginning of episode 26. I never expected I would say this, but this fight works so well because of the set. 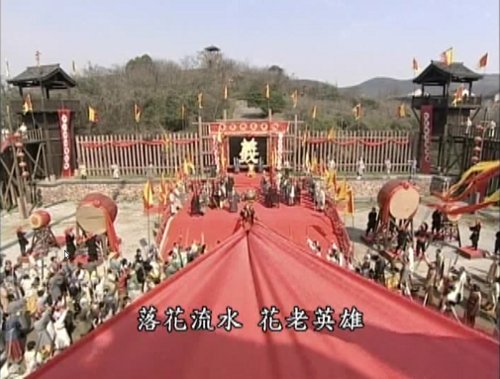 Look at that fantastic ribbon leading up to the stand. 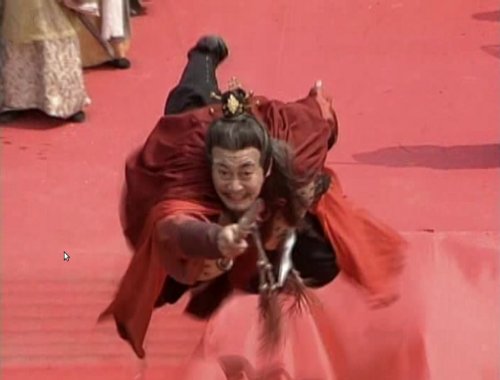 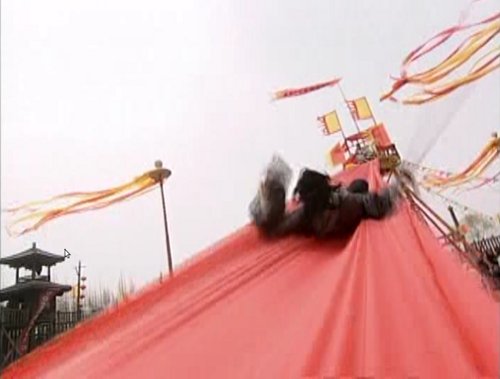 … and get kicked down. 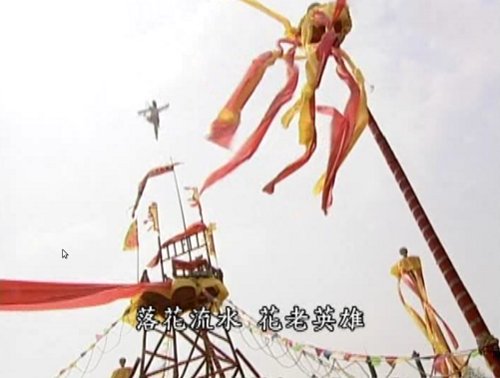 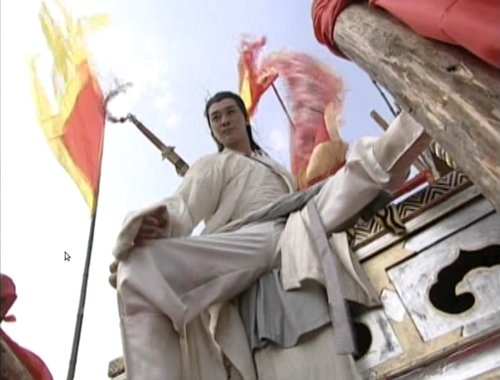 And that stand is a great place for the fighter to stand above the crowd. 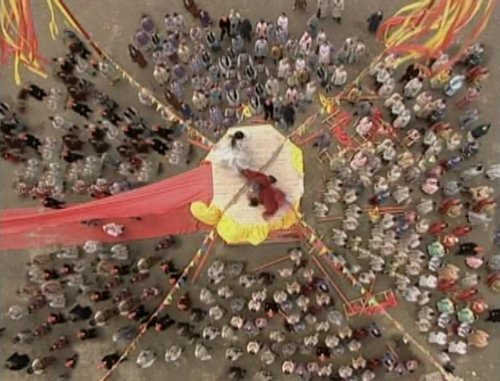 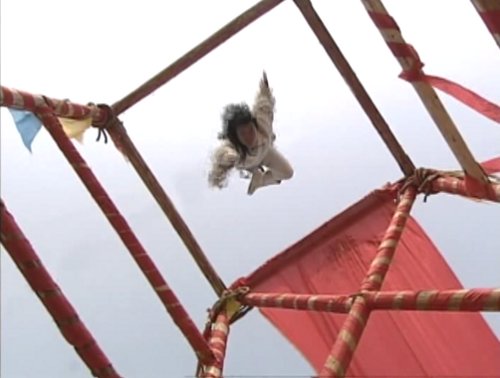 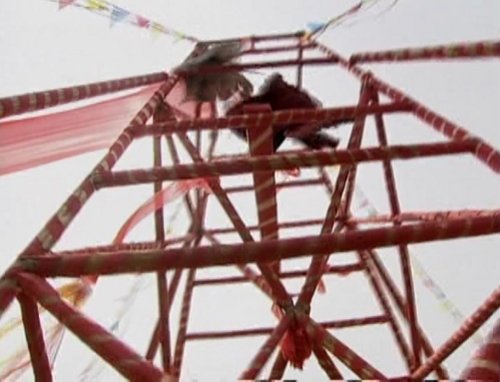 The stand gets destroyed in the midst of the fighting! 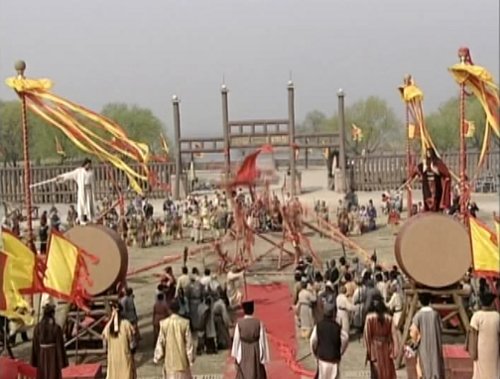 And we have the two fighters standing on drums, while the stand collapses. Now the space has completely changed. Notice that the fighters are still elevated above the crowd. And notice all of those nice tall yellow-and-red streamers, adding nice vertical lines to the scene. With a set like that, it’s okay if the fighting itself is mostly indiscriminate sword-clanging. 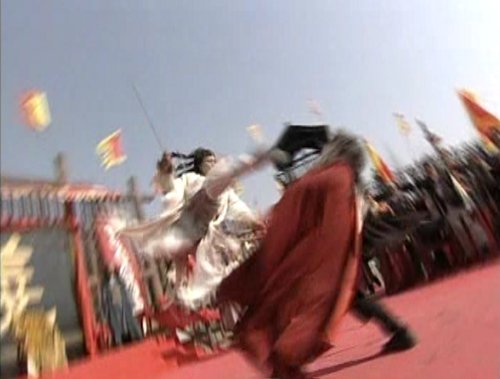 I also need to give points to the costume designer who gave Di Yun such a swishy white outfit. It makes his dancing sword-fighting look more graceful. 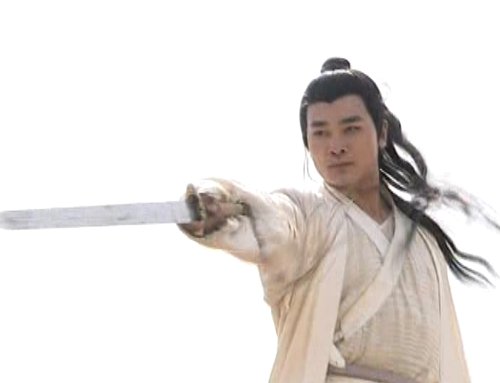 Even if you don’t understand Mandarin, I highly recommend watching this fight scene yourself, because I don’t think I can adequately describe it with words and screenshots alone. You can see it in this youtube video (it starts around the 17 minute mark).

Life in an Unjust World

In a way, this is the harshest, bleakest, and most relenting of Jin Yong’s stories. The world is full of greedy people who really aren’t concerned with ethics … and they ruin the lives of the people who actually do follow some ethical principles. Again. And again. And again.

Yet when money and power are not involved, the ‘bad’ guys can actually do good things and be very nice people. They don’t want to do evil. They merely don’t mind doing evil.

There is something called the ‘just world fallacy’ (TRIGGER WARNING for the link) – in other words, people want to believe that life is fair. It’s called a ‘fallacy’ because there is lots of evidence that the world is not, in fact, fair.

To pick one example (I could pick many other examples) a bunch of financial firms in the United States bribed politicians to loosen regulations, then violated even the watered-down regulations, committed fraud on a wide scale, blew up a giant housing bubble which made shelter less affordable for tens of millions of people, and which destroyed over 40% of the net wealth of middle-class Americans when it burst. Were the CEOs fired, the financial firms broken down, and serious criminal investigations launched? No! The financial firms got large government bailouts, the CEOs saw their pay increase, tens of millions of people lost their jobs and homes, fraudulent foreclosures are poisoning the centuries-old chain-of-title system which are essential to property rights, etc etc. Oh, and the statue of limitations on their crimes is coming up, which will make them immune to prosecution. This is not what a fair and just world looks like. 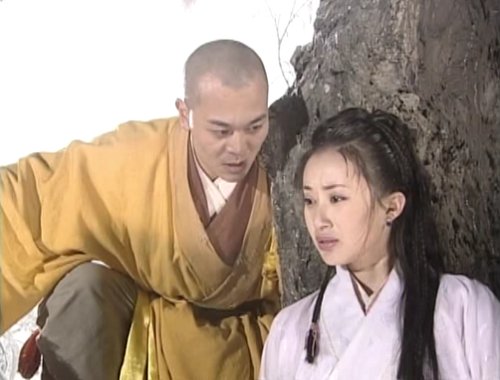 A variant of Sartre’s hell: being stuck in the mountains with somebody you don’t like (fortunately, for them, they stop disliking each other, which improves their quality of live).

Most fiction (okay, most fiction that I’m familiar with) supports the just-world fallacy – the good guys win and the bad guys lose. Like most people, I also want to believe the just-world fallacy, so in a way it’s very comforting. Such fiction serves as an escape, which probably is necessary for one’s mental well-being. But I don’t want all of my fiction to be like that.

The TV series does make the story a little more just than the original novel. For example, in the TV series (but, IIRC, not the novel), the bad guys are often plagued with nightmares filled with the ghosts of the people they have wronged. It’s a nice idea that everybody who commits evil is tortured by their consciences, but I don’t think reality always works out that way.

There’s also a new subplot in the TV series where the good guys defeat one of the bad guys very neatly. On one level, I loved watching that, because it’s nice to see the characters I like delivering a character I hate what he deserves. On another level, it makes the world of the story a little more fair, which I think goes a little against the point of the story. 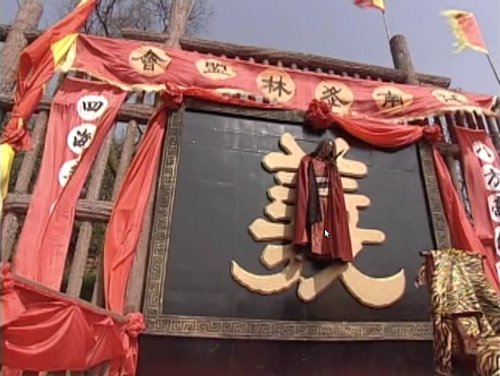 This detestable character finally gets impaled on the spear of justice (the character in the background means ‘justice’). This does not happen in the original novel.

The power of this story, for me, is that it shows that, in spite of the fact that the world is unfair, it is still a wonderful to be alive.

Second, there are wonderful people in the world. It is only by staying alive that one will ever have the opportunity to connect with them. And a good relationship is worth the hardship of living in an unjust world.

Of course [SPOILTER] the bad guys blow themselves up with their own greed at the end, and the good guys who are not dead get an ending that is, if not joyful, at least has some contentment. There is a limit to how much unjustness even I can stand in a story, and I’m not sure I could have taken it if the bad guys were all allowed to live happily into old age in luxury. But this story certainly takes the unjustness of the world a bit farther than a lot of other fiction I’m familiar with.[END SPOILER]

I actually find a story which acknowledges that the world is unjust and how to live on in spite of that more comforting than an escapist tale about a just world.

This … is actually a good TV series. I had my reservations at the beginning, and it took a number of episodes to win me over … but I totally got sucked into the story all over again. If you understand Chinese, I highly recommend trying this.

The movie is also worth watching.

However, my love ultimately belongs to the original novel. Whenever I go back to a story which I had loved before, I’m always afraid that it won’t be as good as I had remembered it. Sometimes my fears prove correct … but not this time. I noticed some flaws in the story which weren’t apparent to me before, but overall it served as a reminder of why I have come to love this story.

Sara K. actually did take a class on set design (as well as a class on costume design and a class on lighting design). She is not a good designer, but she got a lot of practice describing how various designs help or do not help tell a story. The posts she writes about comics would be really, really different if she hadn’t taken those classes … in fact, when she’s writing about comic book artwork, she often feels like she’s talking to one of her design teachers. Of course, it also bleeds into some of her other posts, like this one.