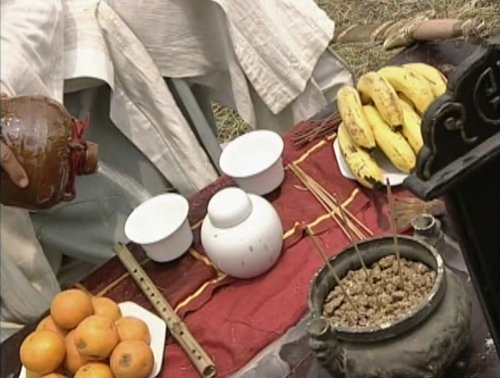 Why, it’s a wedding! 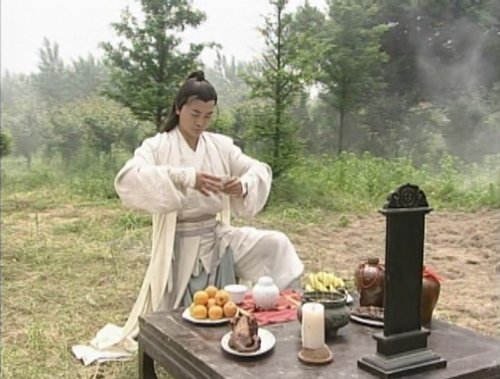 It’s a wedding in front of a tomb. 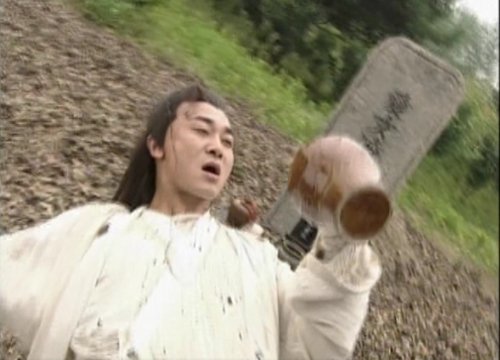 See, both the bride and the groom are dead, so the wedding has to take place at the bride’s tomb.

In wuxia stories, if you promise to marry somebody, you marry them. Death is no excuse. 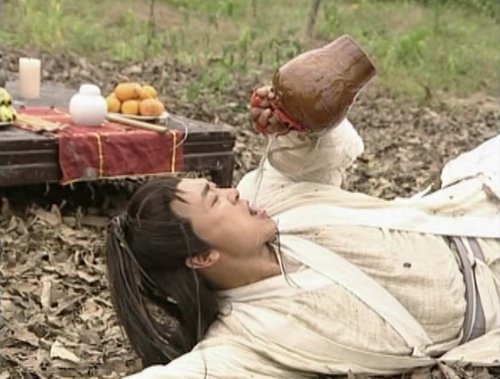 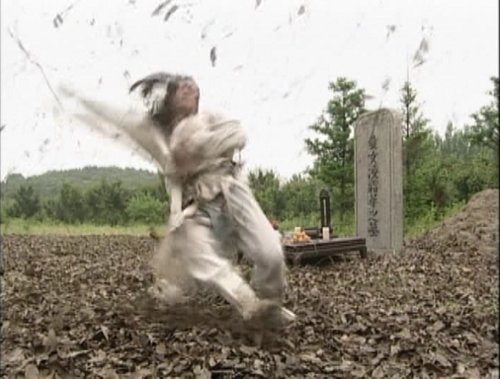 And he’s swinging his sword around with joy. 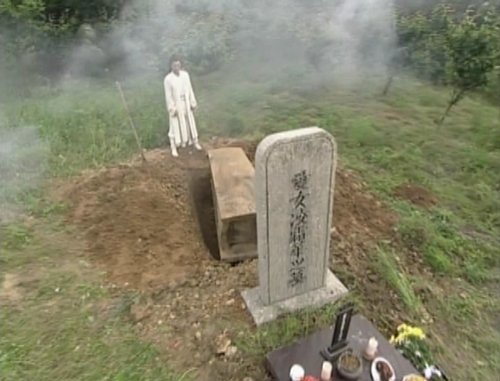 Anyway, since the groom and bride are dead, he needs to help them get together. This is the problem with getting married when you’re dead – there’s no privacy when the newly married couple finally gets intimate physical contact. 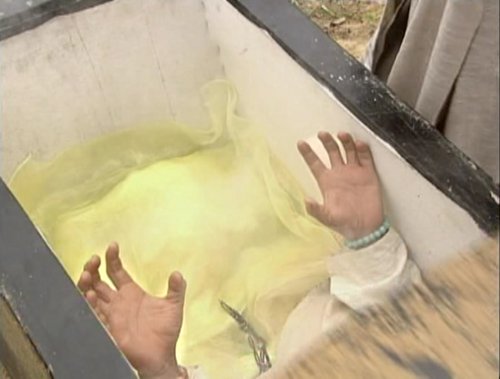 Wait a minute … why are the bride’s arms stretched up like that? 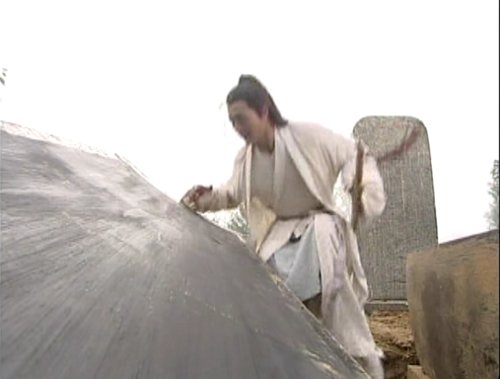 And there’s writing on the inside of her coffin. That’s only possible if she was put in the coffin while she was still alive.

The writing says that, as a reward to whoever reunites her with the love of her life (afterlife), she is revealing The Deadly Secret (which is not exactly a favor, since people who learn The Deadly Secret have a tendency to die young). 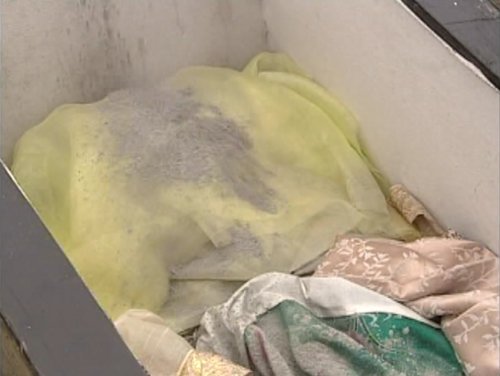 The groom’s cremated ashes are poured onto the bride’s body. What a romantic wedding!

If you don’t know or forgot who Jin Yong is, you can refer to my post about the Condor Trilogy or The Book and The Sword.

Di Yun is a country bumpkin who is studying martial arts and is in love with his master’s daughter, Qi Fang. It’s a real bummer when his master disappears, he gets framed for heinous crimes, Qi Fang marries the man who framed him, the prison guards break his body, and he’s put with a cell mate who beats him up for apparently no reason whatsoever. 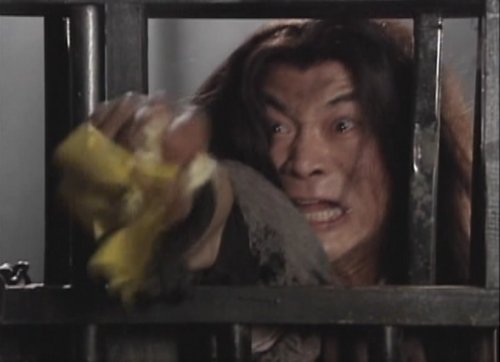 This is what Di Yun looks like after hearing that Qi Fang is going to marry the guy who framed him and put him in prison.

Why does his life suck so much? Well, you see, there is this ultra-powerful martial arts technique and fabulous fortune that everybody is trying to get … and Di Yun is unwittingly close to this deadly secret.

The Songs and the Production Values

If you watch the opening and ending songs, you might notice that the production values are a bit lower than the norm for, say, Hollywood TV shows.

This TV series is 33 40-minute episodes long. The original novel is less than 500 pages long. Before watching this series, I wondered how they could make it so long without lots and lots of padding.

Well, it turns out that there is not that much padding per se. There is quite a bit of added material, but a lot of it is just spelling out things which are merely implied in the novel. Most of the added material is relevant to the story. At worst the new stuff is offensive (because of sexism or ableism) but thankfully most of it is not. Quite a bit is powerfully mediocre. Some of the new stuff, however, is quite good.

The biggest change is not that new stuff is added (since much of it was implied by the novel), but the pacing itself. This novel is quite concise by Jin Yong standards, so things move fairly quickly. In the TV series, things progress in a much slower and more thorough way. In some ways, this increases the emotional impact – for example, we see a lot more of Di Yun and Qi Fang’s relationship, which makes their separation even more heart-breaking. However, in some ways it makes the story harder to watch – it’s much easier to read about Di Yun getting framed in the novel, where events move pretty quickly, than to watch the TV series, where it takes several episodes to watch Di Yun getting framed and tortured in prison.

I also think there is some power in leaving some things left unsaid. That’s one of the things I like about the novel. Sometimes, when the TV series fleshed out the unsaid stuff, it did pretty cool things with it … but I still think leaving things to the reader’s imagination is more powerful.

Even though Ding Dian only appears in two chapters of the original novel (specifically chapters 2 and 3 of the novel), he is definitely the most memorable character in the story. Apparently, other people agree, because both the movie and this TV series give him plenty of screentime. 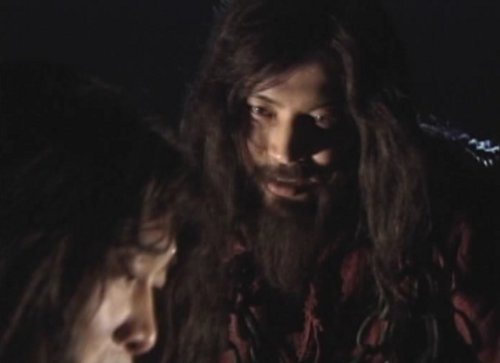 On the one hand, he is a bad-ass martial artist, one of the toughest fighters in this story, and he spends a great deal of time cultivating his kung-fu skills. In fact, he can even (under certain specific circumstances) bring dead people back to life. But it turns out martial arts is not his greatest passion in life.

His great passion, it turns out, is flowers. 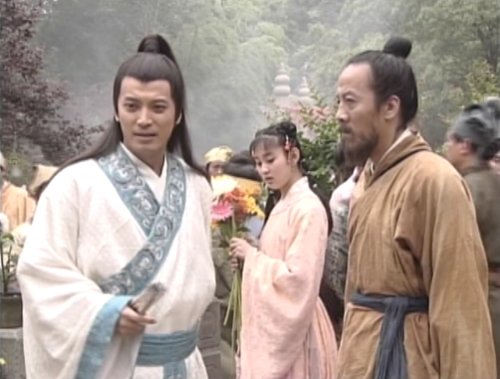 Ding Dian at the flower fair

He is a flower encyclopedia (this is most apparent in the novel, but also indicated in the TV series). He goes to a flower fair. His greatest joy in life is watching flowers. It turns out that one of the villains is also a flower-arranging geek, so he gets to communicate with Ding Dian via flowers. 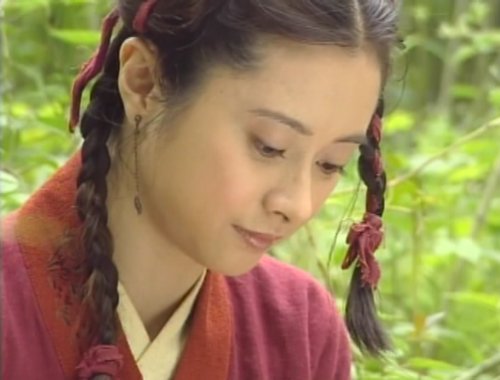 A picture of Qi Fang

And the fact that Baroque China was an extremely patriarchal society makes it that much easier for their families to oppress them, in fact, without the patriarchy helping their families bully them, these female characters would have definitely had much happier outcomes. 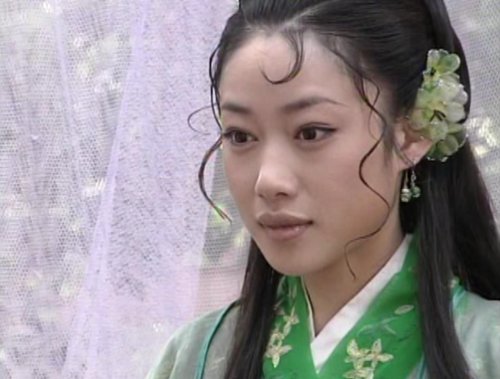 A Picture of Ling Shuanghua

An interesting thing I noticed is that the female characters don’t want to believe that their families regard them as (potential disposable) possessions. They want to believe that they are being loved as full human beings. I can understand this, since the truth is very cruel. In a way, it’s easier to keep on believing one is being valued and loved properly. But reality catches up with all of them.

I appreciate that this TV series gave a lot more attention to the female characters than the novel. On the one hand, some of the new material is powerfully mediocre (at worst, offensive). On the other hand, some of it is good, and definitely fleshes out the females characters more than the novel does. In particular, the TV series is a bit more sympathetic to Qi Fang, and treats us to the Extended Adventures of Shui Sheng (granted, it’s a mixed bag). 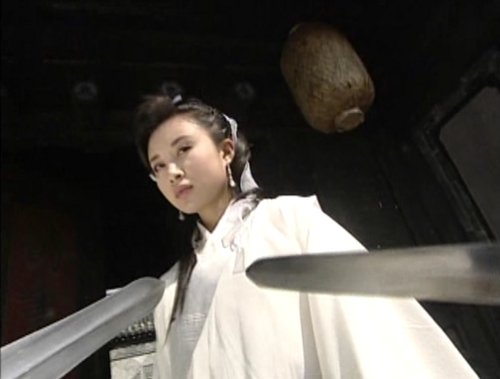 A Picture of Shui Sheng

Yes, the adult female characters even talk to each other in the TV series, which is not true of the novel (they mostly talk to each other about men though). That said, I actually think it’s okay that this story fails the Bechdel test, because the female characters’ isolation is one of the worst ways the patriarchy has stacked the deck against them. Two of the female characters’ families hardly ever let them leave home, and only with supervision, and the third one gets kidnapped, which drastically limits her opportunities to bond with other women.

What is really interesting is that, even though all of the main female characters have the same problem, they react to the problem in different ways.

I definitely have more to say about this TV series, but this post is getting long, so I guess I’ll have to wait until Friday to say more.

Next Time (not Friday): The Bride with White Hair (novel)

Sara K. plans to discuss every single Jin Yong novel at Manga Bookshelf. She is now halfway there, having discussed six novels and having six novels left to cover. Her plan is to discuss Tales of the Young Fox, Sword Stained with Royal Blood, and The Laughing Proud Wanderer next, in that order, but that’s only a tentative plan.