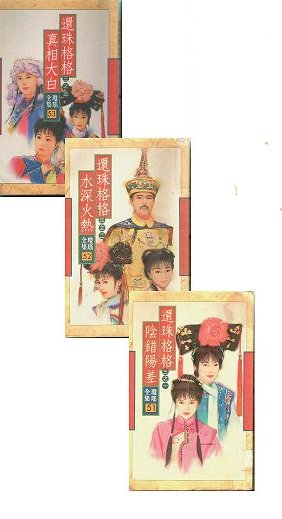 So, a while ago, I said I needed to read some Chiung Yao novels and try some of the TV adaptations. Well, I’ve been working on that, and it is with great enthusiasm that I present Princess Pearl (AKA My Fair Princess and Prince Returning-Pearl).

Almost all of her novels were originally serialized in a magazine aimed at teenage girls, and with all of the cliffhangers, they read like serializations. The works I’ve read so far have an addictive melodramatic quality that reminds me of 70s shoujo manga.

Princess Pearl is her most popular novel, and was adapted into the most popular Mandarin-language TV drama ever (I am not exaggerating). But I want to talk about the novel, not the TV drama.

This novel is set in 18th century China. Xiaoyanzi is a burglar and a swindler who grew up on the streets of Beijing. She encounters Ziwei, an educated and refined girl from Shandong. At first they rub each other the wrong way, but soon enough they bond and become sworn sisters. Ziwei left Shandong upon the death of her mother, and her mother’s dying wish was that she would go to her father in Beijing. Though Ziwei knows where her father is, getting access to him is a problem because her mother never had a chance to tell him that they have a daugther and … well, he’s the emperor of China. Of course, while Ziwei can’t break into the Forbidden City, Xiaoyanzi, as an expert burglar, can.

Upon breaking into the Forbidden City, carrying the evidence of Ziwei’s paternity with her, Xiaoyanzi is shot by an arrow, and eventually passes out. Emperor Qianlong, seeing the evidence, mistakes Xiaoyanzi for being his own daughter. By the time Xiaoyanzi is clear-headed again, it is explained to her that if he discovers that she is a fake, the emperor will cut off her head. Meanwhile, Ziwei remains outside the Forbidden City.

Emperor Qianlong ruled for over 60 years, one of the longest reigns in Chinese history. I don’t know much about the historical Emperor Qianlong, but I remember one exhibit about his personal ceramics collection. In order to show his appreciation for ceramics, he would write poems praising their excellence, and then order people to carve the poems into the pieces. While I didn’t bother to read the poetry myself, apparently a common theme was that it was very important for an emperor to appraise ceramics, and therefore he was not neglecting his imperial duties by obsessing over his collection.

He is a very popular character in Chinese-language historical fiction … however most historical fiction focuses not on his love of art, but his romantic and sexual relationships with various women. Even though I’ve never seen (and probably never will see) The Legend of Qianlong, I do like the theme song.

This isn’t even the first time I’ve discussed him; he’s one of the main characters in The Book and the Sword.

In this particular novel, he is basically presented as a loveable spoiled brat who unfortunately (for everyone else) has absolute power over an empire. He loves art and culture, and feels entitled to having access to the best. He loves romance and sex, and feels that any woman he approaches ought to feel happy about it. And he has had so many relationships that it’s easy for even someone he likes a lot to slip from his mind (Ziwei’s mother specifically). He expects his children to continually shower him with affection and to do everything he tells them to do because a) he is their emperor and b) he is their father. And it is really, really easy to hurt his feelings.

I’m making him out to be a nasty character, aren’t I? Well, in his defense, he is also very loving. When he takes a liking to somebody, he is extremely gentle and kind, and he often gets heartbroken because a) somebody he likes got hurt or b) he feels betrayed by somebody he likes. It seems that he has, by nature, a sweet, warm, and sensitive personality, yet he has been warped by having more power than any human being ought to have.

In any case, it’s no wonder that he appears in so much Chinese-language fiction. He is a complex character who can be presented as a hero or as a villain, and he can fit well in anything ranging from a deep work of serious literature to a titillating pornographic film. 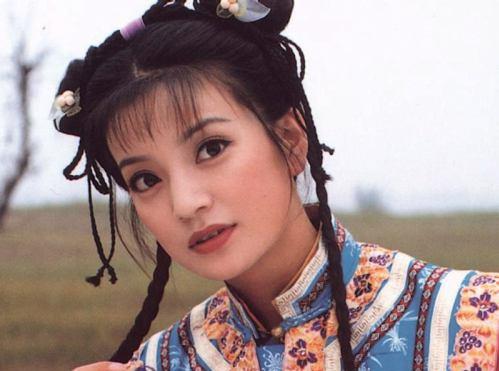 Okay, so sue me, I am using an image from the TV series

Since Chiung Yao is known as a romance writer, I was expecting this to be a romance. And there is some romance in the novel, but it generally happens in the sidelines. But while this novel is not about romance, it is definitely about love. There is even a (non-romantic) love triangle at the center of the action: Xiaoyanzi, Ziwei, and Emperor Qianlong.

Neither Ziwei nor Xiaoyanzi had any father-figure in her childhood, so they both crave the fatherly affections of the emperor. Neither is interested in political power, so when they compete for the status of princess, this is their motivation. Meanwhile, the emperor wants as much love as possible to come his way, and while he never consciously tries to break up Xiaoyanzi and Ziwei, one of the schemes he comes up with to get more of their love would have incidently separated them.

I would say that, in the culture of the United States (as well as in Britain, Canada, Australia, etc), romantic relationships are valued more than parent-child relationships. In the Chinese-speaking world, it’s the other way around.

It has been noted that one of the things which makes Taiwanese idol dramas different from K-dramas and J-dramas is that there tends to be a lot more emphasis on the romantic couples’ parents and other relatives. I don’t know enough about K-dramas and J-dramas to confirm this … but compared to shoujo manga, this is certainly the case. This is also reflected in my encounters with Taiwanese people; they are much more likely to ask questions about my parents and family than about my romantic life.

Off the top of my head, I can think of two Taiwanese movies—Cannot Live Without You/No Puedo Vivir Sin Ti and Seven Days in Heaven—that are primarily about the relationship between a daughter and a father (and IIRC neither movie has any romance whatsoever). I cannot think of any English-language movie that is primarily about a relationship between a daughter and a father. In the context of Chinese-speaking culture, the fact that Princess Pearl focuses on parent-child relationships does not make it an outlier.

So what does the novel have to say about children and parents?

On the one hand, even though Xiaoyanzi and Emperor Qianlong are not biological relatives, they come to care for each other very deeply. This implies that the bond between daughter and father is forged by shared experiences and people’s actions, not by biology. On the other hand, Emperor Qianlong also happens to become very attached to Ziwei, even though he does not know that she is his biological daughter. This implies that the genetic bond still counts for something. Then again, when he first meets her, he doesn’t notice her. It is her actions that finally catch his attention.

While I disagree with some of the ideas that Chinese-speaking cultures have about parent-child relationships, I think it is good that they value them so much and include them far more often in their mainstream media, and I think my own culture could stand to learn something from them.

I have plenty more to say, but I think that’s enough for now. So please come back on Friday for Part 2, when I will:

Next time (not Friday): You Are the Apple of My Eye (movie)

When Sara K. was caught reading a Chiung Yao novel, somebody told her that they are for 16-year old girls. She replied that when she was 16 years old, she couldn’t read Chinese. Furthermore, Sara K. has discovered that Chiung Yao novels, particularly the second halves, are NSFW. If she read them, they might make her cry, and then she’d have to explain to everybody what was wrong.