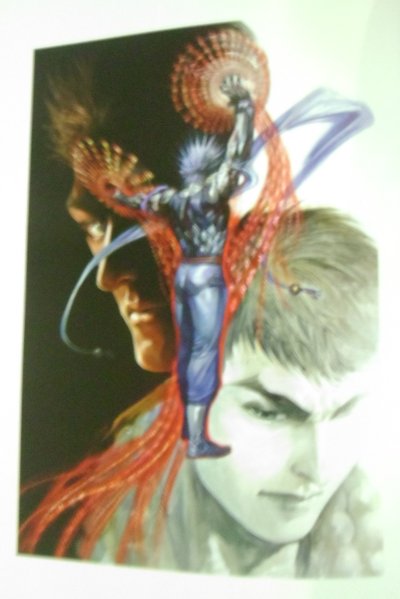 So our protagonist, Qisuo, grew up hearing stories about heroes. Naturally, he wants to become a hero. Where do you become a hero? Shaolin Temple of course (see my previous post about The 36th Chamber of Shaolin).

Qisuo manages to get to Shaolin Temple. Being Buddhist, the monks of Shaolin temple are supposed to be celibate vegetarians. What does Qisuo find at Shaolin temple? 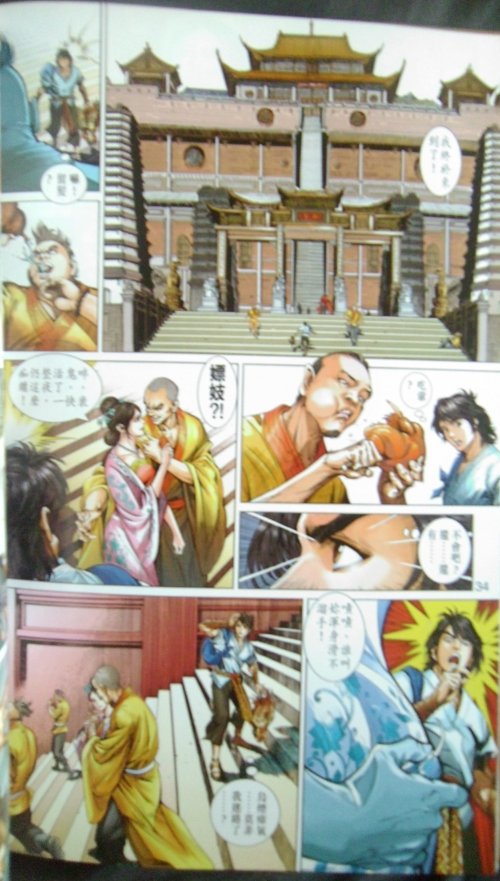 Why, it’s monks eating meat and hanging out with prostitutes! What gives?

Shaolin Temple started accepting any rich kid as a student in order to get generous donations, and the rich kids don’t really want to give up on meat and sex, and … well it influenced the whole institution. Shaolin Temple is now a school for anti-heroes.

Note 1: this is an example of truth-in-fiction; the present day Shaolin Temple does allow the consumption of meat, and according to one martial arts master I know, has become a tourist trap which has lost its traditional way.
Note 2: It is very common, at least in the wuxia fiction I read, for Shaolin (or other Buddhist) monks to somehow break their vows of chastity. They actually seem to be more likely to get laid than the lay unmarried male characters.

Anyway, WHAT IS QISUO SUPPOSED TO DO?! He is so naïve that even this isn’t enough to break his rose-colored glasses.

Don’t worry, he gets to study some marital arts … after getting bullied at the Shaolin Temple.

Oh, and childhood friend, Hongzhong, also leaves the village to learn martial arts. She’s not going to let Qisuo have all the fun.

It’s a bit hard to describe the world of online novels, partially because I don’t know it as well as I should.

Fortunately for the aspiring novelists, Taiwan has a vibrant and unique online culture, which I actually am not too familiar with since I spend most of my online hours in the English-language net (hey, I already live in Taiwan offline, I don’t need to live in Taiwan online too, at least not yet). One of the distinctive features of the Taiwanese internet is that bulletin board systems (BBS), which are considering a relic in most of the world, still flourish (another reason I’m not too familiar with the Taiwanese internet – while I’ve learned thousands of Chinese characters, I still haven’t learned how to use a BBS!). Anyway, it is in the BBS-world that aspiring novelists show their stuff.

Now, there are traditional-style novels which first reach readers through the internet. For example, Passionate Wastrel, Infatuated Hero was originally published online. If these novels get a traditional publishing contract, they will generally be listed under a traditional genre (in this specific case, “wuxia”). However, a new style of novel writing has emerged from the labyrinths of the Taiwanese BBS world, and if these novels get printed, they will be listed as “online” novels.

Giddens first became famous in the BBS world, and I know about half of his novels originated there. I have not confirmed whether The 8th Bronze Man of Shaolin is one of them. Nonetheless, pretty much all of Giddens novels get shelved under “online novels,” regardless of the story’s genre. And while this story is in some sense a wuxia story, the novel is written in an online style.

So, if Tony Wong (whom I’ve discussed here and here) and Ma Wing-shing (whom I discussed here) are the two top Hong Kong kung-fu/wuxia manhua artists, then James Khoo is around number four. He actually started as an assistant for Tony Wong, and later left to make his own name.

Unsurprisingly, James Khoo’s style is a lot like Tony Wong’s style. On the one hand, his artwork doesn’t pop the way that Tony Wong’s does, nor does it compel me to flip back through the pages after I’ve finished a volume. On the other hand, it’s more grounded—and I don’t think it’s any less lovely. I haven’t seen James Khoo display Tony Wong’s skill in telling a story visually, though this might not have been the right story in which to do that (NOTE: the artwork looks way better in print than in these terrible photos). 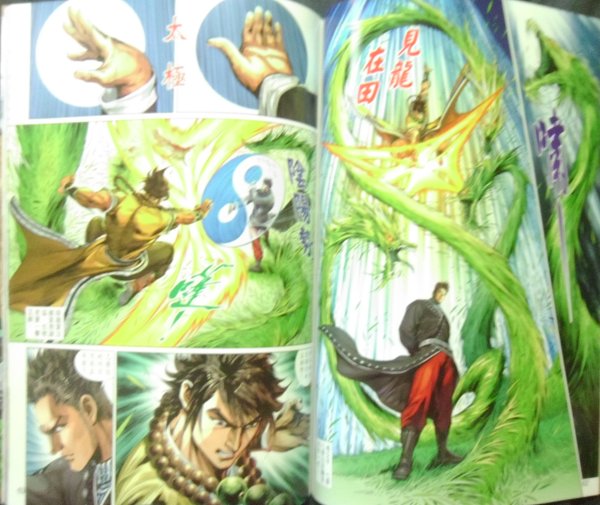 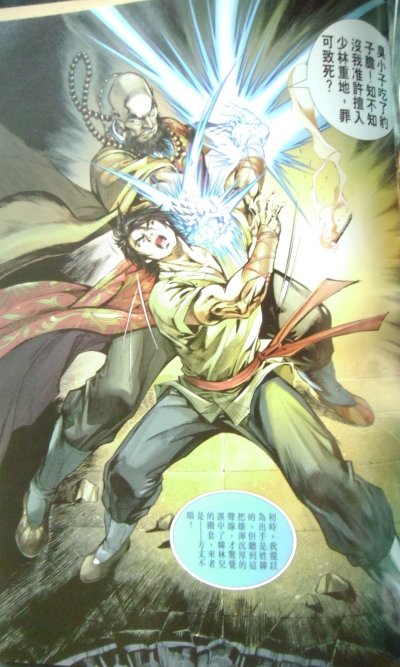 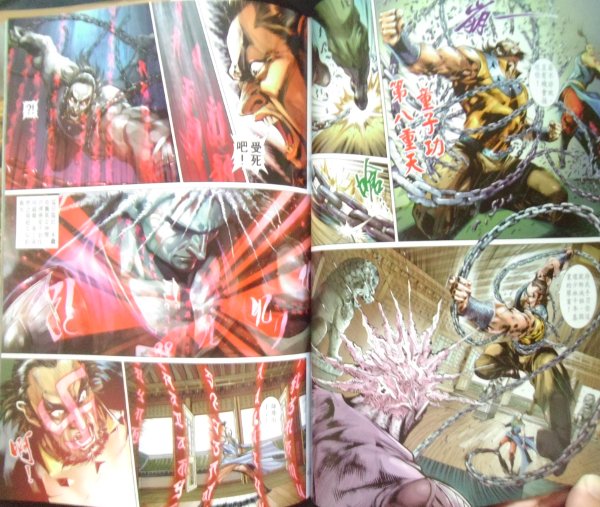 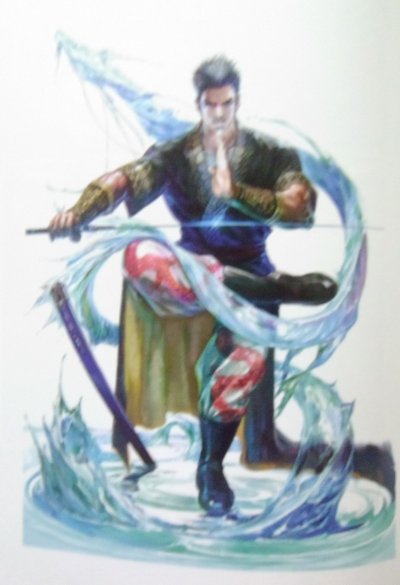 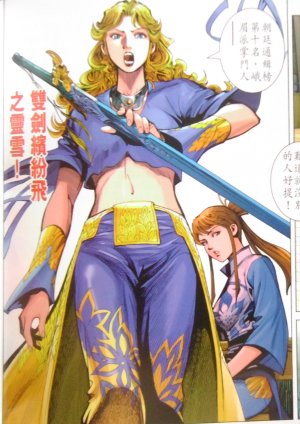 Seriously, was it necessary to expose Ling Xue’s belly like that? She’s a flipping martial artist! None of the male martial artists wear such impractical clothing… 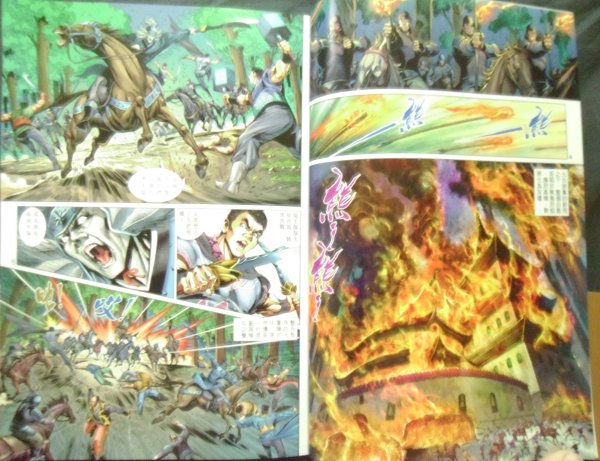 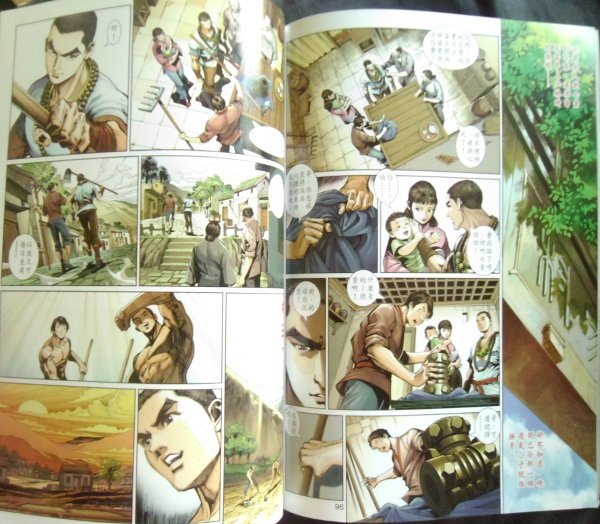 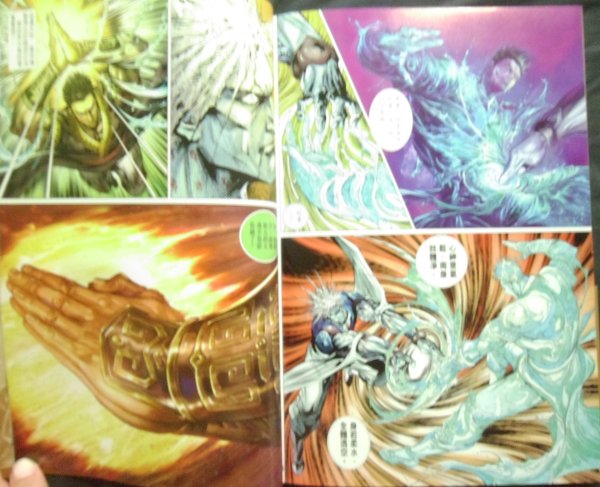 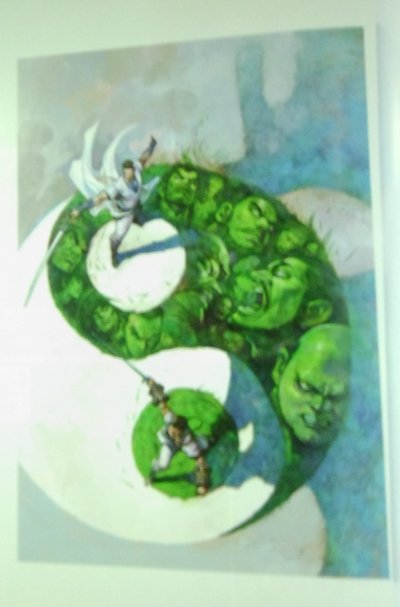 To make this clearer, let me use the wuxia novel Pingzong Xiaying Lu as an example. The protagonist is Yun Lei. In the prologue, we learn that her grandfather had been exiled in Mongolia for 20 years, her father had been killed, and she had been separated from her mother, all because of somebody called Zhang Zongzhou. Shortly before his death, her grandfather commanded his offspring to grow up and get revenge by killing any member of the Zhang family, young or old, that they may encounter. At the time, Yun Lei was seven years old. This is her original tragedy.

Ten years later, Yun Lei is a teenager who knows how to wield a sword. It is time for her to actually go about getting revenge for the wrongs done to her family. She intends to reunite with her brother, whom she hasn’t seen in more than ten years, so they can get revenge together. Of course, traveling alone isn’t fun, so she travels with a young man called Danfeng. He’s also pretty good with a sword. They have adventures together and fall in love. Then it is revealed that Danfeng is Zhang Danfeng and … well, I think you can guess who his father is. He is Yun Lei’s monkey wrench.

This is the most common setup—somebody killed the protagonist’s parent(s), so the protagonist must work hard to be powerful enough to get revenge—but then ZOMYGOSH THE PROTAGONIST FALLS IN LOVE WITH THE CHILD OF WHOEVER KILLED THE PROTAGONIST’S PARENT!!!!!! There are, however, plenty of other ways to set up original tragedies and monkey wrenches. And of course, original tragedy/monkey wrench setups can be found outside wuxia too (in manga, for example).

Why did I go into this long digression? Because this is why the story of The 8th Bronze Man of Shaolin doesn’t quite click with me. Qisuo does not have an original tragedy—he left his village because he wants to be a hero. Okay, he does get bullied a bit at the Shaolin temple but a) Qisuo doesn’t seem to be hurt enough for that to work as an original tragedy b) it doesn’t change Qisuo or inspire him to take a particular course of action.

Now, Jubao does have an original tragedy, but a) he’s not the primary protagonist and b) it … I just don’t feel enough pain coming from Jubao for that to quite work either.

Wuxia stories don’t absolutely need original tragedies but this story doesn’t really work without one. The lack of monkey wrenches also does not help. This story feels to me like it’s just about youths learning martial arts, improving, and defeating increasingly powerful enemies … all without growing or maturing as people.

In other words, this story fails for me.

The artwork is available to anybody who has eyesight. The story (in both manhua and pure prose form) is only available to readers of Chinese, but I don’t think that’s a big loss.

I don’t think Giddens was trying to write a classic wuxia story at all. I think he was trying to indulge in wuxia geeks’ fantasies. Qisuo—who grew up listening to stories of heroism—is basically a cipher for the reader. He gets to be best friends with Zhang Sanfeng, the legendary creator of Tai Chi and a character in many wuxia stories, help him develop Tai Chi, and eventually marry his sweetheart.

Well, it did not work for me. But the idea is good. In fact, Giddens tries the same thing in another novel, and in that novel it works so well that it is my favorite Giddens novel so far (I will discuss it here eventually, I am sure).

I do like James Khoo’s art … and I find it a bit disappointing that he choose to adapt this novel when there are so many better novels out there he could have adapted (Pingzong Xiaying Lu for example).

What was Sara K. doing while this column was on hiatus last week? Last Tuesday she was visiting Little Liuqiu Island, where they burn boats (they weren’t burning any boats while she was there though). Anyway, Sara K. is going to do a lot less running around Taiwan now, which means this column will regain its regularity. Hopefully.