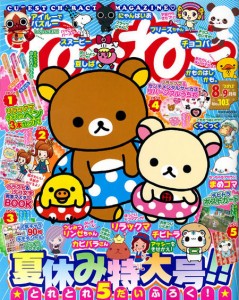 In all the discussion of genre in manga, and how there’s “something for everyone” in Japan but that many of those audiences are entirely under-served in the west,” the one segment of the audience that is least served by western manga publishers is…children.

Yes, there are are titles that could appeal to children on the western maket. Gon, Yotsuba, Pokemon Adventures, Chi’s Sweet Home – these have all-ages appeal. (For more kid-friendly manga titles, try the Graphic Novel Reporter’s Core Ten Manga for Kids and check out their full 100 for some interesting suggestions.) But, in a country where Shounen Jump is the only translated manga magazine that’s made any impact on the market for any extended period of time,  you can be sure there’s a lot of kid’s comics being printed in Japan that we’re not seeing.

Around our house, a favorite children’s magazine is Ne~Ne. Ne~Ne is an elementary school level reader, illustrated by characters that many Americans would know:  Rilakkuma, Mameshiba, Nyanpire and many other character goods characters, interacting – within their own worlds – in 4-panel comics. These comics are not, as one might suspect, full of morality plays or real-life skills as American children’s media always is, although there are word matching, maze-scaling, picture drawing games in these magazines. No, there’s no such “appropriate for children” educational stuff going on here. For example:

There’s a lot going on here: The cat with the eyepatch is Dokuganryuu Masamunyaa, the cat avatar of the famous one-eyed general, Date Masamune (who was known as Doukuganryuu – the one-eyed dragon). The cat with the cross is the blood-sucking cat Nyanpire and the partially transparent cat is Nyatarou-chan, a ninja cat, that Masamunyaa marks with the word “ninja” so they can see him more easily. The 4-panel strip is titled “Signpost” (which is my new word for the day.)

This is life in a typical (?) children’s magazine; where animals decorate cakes, children swim in the ocean and are covered in squid’s ink, warring period general cats study history, cheerful pieces of toast put cheese on themselves and characters eat, drink and make merry in a hundred marketable ways. Ne~Ne is a mere 86 pages, for 680 yen ($8.89 at time of writing) which makes it one of the more expensive of the magazines we buy, but the entertainment value is pretty high. We love Ne~Ne around here, because it also comes with loads of giveaway goods, stickers, cards and other ephemera.

Ne~Ne is not, as with most other manga magazines, sold to its readers. Children under the age of 8 rarely have a lot of disposable income, nor do they always have computer access of their own. The website for Ne~Ne is not full of bright colors and shiny things. Instead it clearly is meant to appeal to the family-oriented sensibilities of the parents who buy the magazine for their children.

As a primer for living in a consumer-goods society, Ne~Ne is pretty ingenious. It’s also a fun way to learn to read for overseas otaku who obsessively buy things like Masamune Date goods. (Stop looking at me like that!)

Ne~Ne, by Shufu to Seikatsusha (Which has the English tagline: A publisher, igniting your life with fulfilled sources of information): http://www.shufu.co.jp/magazine/nene/