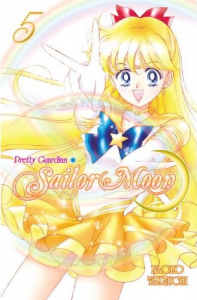 I’m trying to put into words the ideas I’ve discovered with this volume of Sailor Moon. In this volume, the fight between Wiseman and his Malefic Black Crystal and our heroes reaches its crescendo. Some of our heroes are not going to be returning, I’m sad to say, and one character who only recently got introduced is for the chop. As I said, it’s not easy trying to explain the ideas I’ve had bouncing around since I finished the volume. I guess if we’re boiling it down, it’s the idea of infinity and eternity. In my mind, Sailor Moon and her friends embody the idea of infinity. The idea of infinity is that there is no end to it, stretching out into an endless horizon. The Sailor Senshi are that concept in action. On first inspection there seem to be limits to their powers. Even after three of them being captured, Sailor Moon still finds an unending horizon of strength to fight back against the power of Wiseman and his planet, Nemesis.

As the fight against Wiseman heats up to include fighting against one of their own, the team has to—has to—find the inner strength to defeat an enemy who just won’t stop. And in turning to eternity, we see the concept in Wiseman. Here is an enemy who has been waiting for so long to destroy Neo Queen Serenity, 30th Century Crystal Tokyo, and the Earth in general that he has been bleached by the universe until only the hate remains. He could wait forever for his revenge, he just doesn’t want to. In this volume, despite the team fighting their hardest fight, Wiseman and his cronies just keep coming.

The core of this volume is the maturing of Chibi-Usa into a girl who isn’t just the daughter of the King and Queen of Crystal Tokyo. She drops the bratty act in this volume and becomes a person who has only an idea about who she wants to be. The people around her only want the best for her but if she doesn’t recognize that, events will destroy the people she loves. The way Takeuchi writes the relationship between Usagi and Chibi-Usa, initially I despaired that it would degenerate into catty, screaming sessions between them. But Usagi starts seeing her as her daughter rather than the Queen’s daughter (Usagi has, up until this point, been viewing Chibi-Usa as another person’s daughter and not hers) and this causes her to risk everything. The person who helps her see this, surprisingly, is Mamoru. Without his character taking the risk to trust Chibi-Usa, the way Takeuchi is going with this wouldn’t work.

That’s not to say there aren’t problems with this volume. The other Senshi get pretty much pushed to one side and I thought they were treated as kind of “We need Sailor Magic artillery! Quick, call up our reserves!” And after I’ve been introduced to them properly over the last little while, it felt a bit jarring. Another problem is Demande (yeah, remember him?). We’ve been given hints that he’s really unsettled by something about Wiseman. When his suspicions are confirmed, he quickly descends into madness. Completely. Totally. I really mean this, he just goes crazy and does the whole Andross from StarFox: “If I go down, I’m taking you with me!” After watching him be so measured for the last few volumes, his spiral into CrazyTown is positively Shakespearean.

The destiny angle comes up again in this volume and I must say, I’m trying hard to figure out if Takeuchi will ditch putting Usagi in peril anymore. The reason I say that is because we know she becomes Neo Queen Serenity, so putting her in danger doesn’t make any sense since we know she’ll be ok. Yes, I know that she could be put into a pocket dimension or into the far future but still, I would feel kind of insulted if the author tried to do this.

If nothing else, normally I should hate the fact that Takeuchi keeps trapping me in endless cycles of “New enemy! Even more effeminate than the last! Another Senshi is kidnapped! Another massive fight! Another defeat for the Senshi! Another stand-alone fight between the big Evil Cheese and Sailor Moon!” I really should be annoyed because she hasn’t changed the record once, but really the parts I like the most about the fights are the little moments when Usagi and Mamoru try and reconnect with each other. They’re the parts that reveal the most about these two lovers and the lengths either will go for the other. It takes skill to pull the wool over my eyes like that and still get me to come back. Yeah, like I’m that important, right?

No translation notes this time around but that’s OK, there weren’t really any moments that confused me. One thing I wanted to ask you guys about. A few of the pages in the book are blurry and smudged. Dialogue is also blurred, so it’s a printing issue. Is this affecting anybody else’s copies? Let me know, would you?

We are nearing the halfway point of the series and while I’m enjoying myself, the fact is that little voice in the back of my head is whispering “It’s almost half over!” This makes me a little sad because I don’t want the merry-go-round to stop. It has to, I know, still here I am. This is a fine entry and I can’t say anything more praiseworthy in life than that.

(After a two month hiatus, I’m back on the column! Apologies if you were wondering where I had gone. The Kurosagi Corpse Delivery Service MMF kept me busy so I decided to skip doing a column post for August. I’m up at full speed again and I’d like to know if there are any immediate recommendations you would suggest for after I end covering Sailor Moon.)