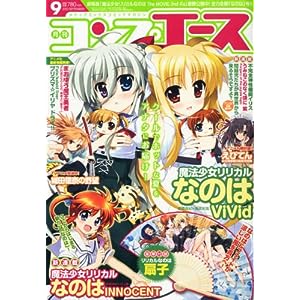 When people casually refer to Japanese manga magazines as “phone books” they are commenting on the general size, thickness and paper quality of the things. And of these phone book-sized magazines, there are few as impressively phone book-like as Monthly Comp Ace. One of the many Kadokawa Shoten magazines designed to generate highly popular anime franchises and massive amounts of related goods, Comp Ace magazine reaches an impressive 900+ pages all for a mere 780 yen ($9.97 at time of writing).

Manga series from the likes of Comp Ace rarely become licensed properties, and when they do, they more often perplex than delight. This is due to the specific qualities of the 4-panel comics that run in the magazine, comics which are designed to cater to the hardcore anime, manga and gaming otaku of Japan. Lucky Star is probably the most globally well known-of these series. Lucky Star actually made it over to western shores as an anime – that did not do nearly as well in the west as it did in Japan, where it *still* inspires fans to make pilgrimages to the town where it is set – and as 8 volumes of manga which suffered at the hands of poor translation at the beginning and bad management throughout it’s time on shelves.

Manga that runs in Comp Ace is far more likely to do well in game form, as the audience for this magazine are gamers at their core. Idolmaster: Xenoglossia, many of the Fate/ series, Cardfight! Vanguard, Tantei Opera Milky Holmes and many other games have graced Comp Ace‘s pages as manga.

Lastly, and to some extent most successfully here in the west, many of the franchises whose spin-off manga runs in Comp Ace, are well-known to westerners as anime series. Magical Girl Lyrical Nanoha Vivid, Tengen Toppa Gurren Lagann: Gurren Gakuen-hen, Macross Frontier, Kiddy Girl-and Pure, Canaan, all have had some anime presence here in the west.

Comp Ace is part of the Comptiq set of magazines for the same audience, many of which include the same series or cross-overs of series. The website for the magazines is: http://www.comptiq.com/ Each individual magazine is given a cover page with a list of contents, and there is a general news link for the site and specific series are highlighted on the menu.  Interestingly, these magazines often come with goods as extras. I picked up this copy of Comp Ace for the fan with an intimate picture of Fate and Nanoha from Magical Girl Lyrical Nanoha, (a series of which I am a fan, despite myself. ^_^;)

The problems with the translation of these manga to English are severalfold. The in-jokes are crafted for Japanese fandom, many of the rituals and habits of whom are alien to western fans, and the 4-panel comic format is about as funny in Japanese as Sunday paper comic strips like Blondie are in English. Many of the series in Comp Ace tend towards the eroticization of pre-pubescent girls, in extreme displays of moe art. Female nudity is copious and unrealistic. In fact, despite the fact that I follow a few of the series in Comp Ace, reading it always leaves me with the feeling of needing a shower.