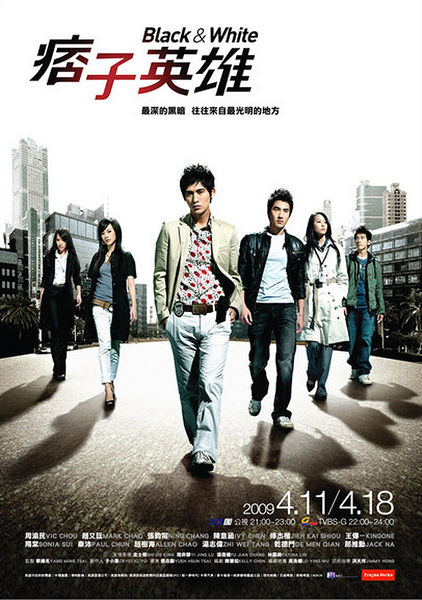 If you asked me what the most important idol dramas ever made are, I would answer Meteor Garden (adapted from Hana Yori Dango) and Black & White. Meteor Garden, of course, as the first idol drama ever made, defined the entire genre, and was extremely influential not only in Taiwan, but also Japan, South Korea, China, the Philipines, Thailand, and beyond. However, while Black & White has not had Meteor Garden‘s international reach, its effect on Taiwan itself, based on my subjective observation, has been deeper. Most of this post is about this effect, rather than reviewing the drama itself.

Kaohsiung Police Department’s top two crime solvers are Chen Zaitian (nicknamed Pǐzi – “Ruffian”) and Wu Yingxiong (Yīngxióng means “Hero”). Pizi goes around wearing snazzy white suits, hanging out at trendy cafes, sleeping with women, and working the sleaze circuit in ordet to ferret out clues. On the other hand, Yingxiong, who usually is wearing black, is brave, has a very strong sense of justice, personally sets out to right wrongs and, well, he generally acts like a hero. Unfortunately, he’s not very patient or subtle.

The Kaohsiung Police Department assigns these two to work on a case together. Oh dear.

Actually, this description makes this story sound a bit like something else I’ve discussed in this column. I guess there are no new plots.

About the Main Actors

The main actors, of course, are Vic Chou as Chen Zaitian, and Mark Chao as Wu Yingxiong. 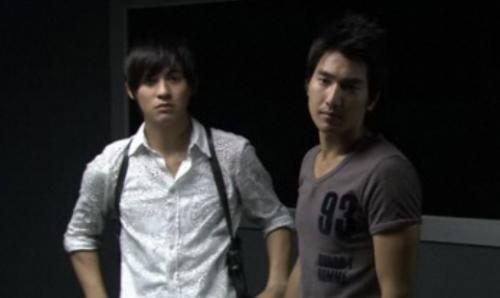 Vic Chou is one of the top idol drama actors ever. He debuted in Meteor Garden as Huazelei (Hanazawa Rui). However, he didn’t really show his full potential until he was cast as Ling (Rei) in Mars. I think his popularity is justified, and I have a lot of respect for him as an actor. While he needs a good script to show his talent (most actors do), his performances in both Mars and Black & White are excellent. 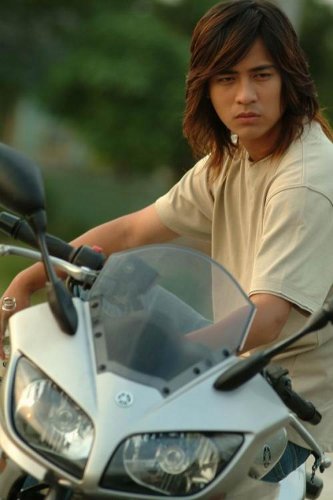 Mark Chao, on the other hand, is better known as a singer than as an actor. This is the only time he has ever appeared in a TV drama … yet he won the Golden Bell Award (the Taiwanese equivalent of the Emmy Award) for Best Leading Actor. His other notable acting performance is as Wenzi (the main character) in the blockbuster film Monga. When I say Monga was a blockbuster, I mean that it was the #1 film in the Taiwanese box office during its run in theaters … and it ran in theaters at the same time as James Cameron’s Avatar. Mark Chao also sings the opening song for Black & White.

But, while Vic Chou and Mark Chao are both celebrities and play the main characters, neither is the true star of the drama. The true star, of course, is Kaohsiung.

Kaohsiung is Taiwan’s second-largest city, Taiwan’s largest port, and the largest city in southern Taiwan. Over the last ten years, Kaohsiung has gone through a great transformation.

In older accounts, Kaohsiung is called an ugly, highly-polluted, boring hellhole where the tap water is laced with heavy metals (including lead and arsenic), and which should be avoided unless one must be there for economic reasons. However, nowadays people are always telling me about how nice Kaohsiung is.

For a long time, Kaohsiung, aside from some key business interests, had been neglected by the government, which is one reasons why the city had such severe problems.

Then a funny thing called democracy appeared in Taiwan. In fact, most historians say that the ‘Kaohsiung Incident’ was a turning point for the Taiwanese democracy movement. It is worth noting that Kaohsiung suffered more under authoritarian rule than Taipei did, so it was not a coincidence the human rights activists were organizing there.

Of course, governmental reform took decades – Taiwan didn’t have its first free and fair presidential election until 1996. And even then, it took time to shift policies. But shift they did (to what extent, of course, is a subject of heated debate).

The major changes to Kaohsiung happened under the leadership of Mayor Frank Hsieh, and continued under Kaohsiung’s current mayor, Chen Chu (Chen Chu was one of the “Kaohsiung Eight,” and is the only woman to have ever been mayor of a major Taiwanese city). The government reduced pollution, improved the sewage system, built an MRT system, created many parks and recreation areas, hired international designers to beautify the city, and otherwise turned Kaohsiung into a much more livable place.

Of course, it wasn’t only the government that was neglecting Kaohsiung. It was also the cultural media. The vast majority of Mandarin-language dramas are filmed in northern Taiwan – either in Taipei itself, or, if they want to have a more rustic feel and/or reduce filming costs, neighboring areas such as Taoyuan or Yilan county (I do not know enough about Taiwanese (Hokkien) language dramas to comment on them, but most younger people in Taiwan don’t watch them anyway). I think this type of cultural neglect has a psychological effect on people.

Like almost every inhabited place on Earth, Taiwan has regional divisions, and the big one is north vs. south. In Taiwan, the north is definitely richer, more powerful, more economically robust, better infrastructure, etc. It is telling that when many people think of Taiwan, they think of Taipei, Taiwan’s northernmost major city. And Taipei also happens to be the capital (political power).

However, southern Taiwan is the center of Taiwanese/Hoklo culture (note: some people prefer to refer to it as “Taiwanese” culture because they consider it to be the true heritage of Taiwanese society, whereas other people prefer to refer to it as “Hoklo” to emphasize that it is only one of Taiwan’s traditions, and that the other cultural traditions are just as ‘Taiwanese’ as the Hoklo one – I am trying to be neutral, so I will use both terms). In particular, Tainan, Taiwan’s oldest city and former capital, is considered the heart of traditional Taiwanese/Hoklo culture.

A further wrinkle is that many residents of nothern Taiwan are originally from southern Taiwan. Due to the better economic and educational opportunities, many people from other regions of Taiwan move to the north, but still have family and cultural connections to their native region. And many have moved from Kaohsiung to the north (especially Taipei). The reverse is a lot less common. Thus many people in northern Taiwan actually identify with the south on some level.

That most certainly is not the case of Black & White. It has Kaohsiung all over it. The opening song features Kaohsiung prominently; the ending song also features the city prominently. The first episode features Formosa Boulevard Station, Kaohsiung’s most notable MRT station. There are some scenes in the Yuansu Yujhu fashion area, which is Kaohsiung’s equivalent of Taipei’s Ximending and Tokyo’s Harajuku. The climax of the story takes place in the middle of Kaohsiung’s most famous feature, it’s harbor. The city is clearly featured in every single episode. I have seen no other idol drama which puts as much emphasis on place as Black & White.

In fact, I wonder if the MRT system was featured so prominently in the drama to encourage people to ride it. I know that it has been a disappointment due to the low ridership. People (both Taiwanese and foreign) have told me that the Kaohsiung MRT ‘sucks’, but I found it very useful. If I had spent more time in Kaohsiung, I might have figured out why it ‘sucks’, but for now it seems to me that the problem lies in people’s attitudes rather than the MRT system itself (granted, there are also claims of corruption in the construction of the MRT system, which is a totally different issue).

This has very high production values for a idol drama. I don’t just mean the special effects and cinematography; the producers pulled in top acting talent (see above), got really good writers on the project, and had a very clear commitment to quality across the board.

It’s as if Black & White tried to compensate for decades of media neglect in one fell swoop.

This is one of those posts which ended up being a bit long, so I’ve broken it into two parts. Normally, I try to post two-parters in the same week … but this week I’m really busy, so part two will be posted next week. In part two, I discuss, among other things, how the drama depicts the city, how the city depicts the drama, how to get this drama in English (hint: it can be done legally), and some personal observations.

See you next week…

Sara K. spend a couple years living in Oakland, California. When she thinks of Oakland, she thinks of the majestic cranes at the port (when she was a kid, she thought they were dinosaurs). So when she sees the cranes of any port city, she always feels a tinge of childhood wonder, as will as a light, wispy, fleeting sense of home.